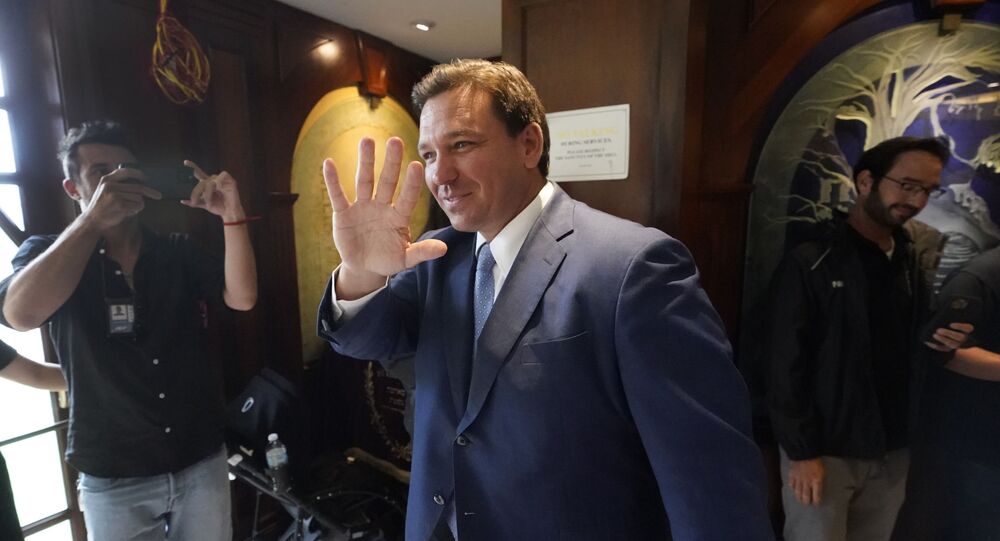 The Florida governor came out on top with 74 percent of potential voters approving of him as a presidential candidate, while Trump ranked second with 71 percent, according to the latest survey. Senator Ted Cruz of Texas received 43 percent. Former Secretary of State Mike Pompeo and Senator Tim Scott of South Carolina received 39 percent and 36 percent, respectively.

In-person and online attendees of the Western Conservative Summit were asked to choose among 31 GOP and Democratic potential candidates, including President Joe Biden, Vice President Kamala Harris, and Senator Bernie Sanders. However, the top 13 were all Republicans.

The survey employed the approval voting method, whereby voters picked multiple responses to each question which, according to poll conductor Frank Attwood, "minimise[d] spoilers and sabotage and [gave] viability and visibility to minor candidates".

​The summit, which was hosted by the Colorado Christian University's Centennial Institute, is regarded as the largest gathering of conservatives in the Western United States – a region comprising the 13 westernmost states of the country.

Besides picking potential presidential candidates, the summit's attendees were also asked to choose policy issues that were of utmost importance to them. Immigration/border security was picked by 82 percent of respondents. The second most burning issue turned out to be election integrity with 79 percent. Religious freedom (75 percent), federal budget/deficit (74 percent), and gun rights (just under 74 percent) rounded out the top five matters concerning these American voters.

DeSantis' latest victory in the straw poll followed his outstanding performance in the Conservative Political Action Conference (CPAC) straw poll in February 2021, where he ranked second after former President Trump. At that time, Trump received 55 percent, while DeSantis received 22 percent. However, when Trump was excluded from the question about the 2024 race, the Florida governor gained 43 percent of votes as a potential presidential candidate.

DeSantis has recently received a lot of media attention, being praised by conservatives over his handling of the coronavirus pandemic, banning of COVID passports, cracking down on critical race theory, and Big Tech. According to conservative observers, the Florida governor's agenda in many respects mirrors that of the former American president. Donald Trump appears to still be backing the Florida politician, whom the ex-president campaigned for during the 2018 gubernatorial race in the state. The two have been repeatedly seen together since Trump left the Oval Office.

"The basis for Critical Race Theory is that the structure is rooted in racism, white supremacy, and white privilege, … our history shows that is not true. We have made tremendous progress toward that more perfect union …" - Quisha King, @Moms4Liberty https://t.co/7t7i17v6EU

​On 16 June, DeSantis announced that law enforcement officers from Florida will be deployed to Texas and Arizona to help them tackle challenges on the border.

"America's border security crisis impacts every state and every American", he emphasised, stressing that he was responding to "the failure of the Biden administration to secure our southern border". Florida became the first state to lend a helping hand to other American states struggling with the border crisis.

The border crisis is a created crisis stemming from bad policy choices. Texas and Arizona have asked Florida for help to do what Washington won't — SECURE OUR BORDER. pic.twitter.com/2sJGVKynjH

​Commenting on the governor's growing popularity, The Hill suggested last Wednesday that although DeSantis is seen by many as a potential GOP presidential candidate in 2024 "he may be unlikely to run for the White House if the former president chooses to seek re-election."

​For its part, the left-leaning US press has repeatedly tried to find fault with the Florida governor. In April, CBS' "60 Minutes" promoted the story that DeSantis granted a contract to distribute COVID-19 vaccines to Publix, a grocery store chain, which earlier made a $100,000 donation to his political action committee (PAC). The Florida governor rubbished the narrative as "fake". The Democratic Mayor of Palm Beach County Dave Kerner and Florida's Director of Emergency Management Jared Moskowitz also rejected the CBS story as "intentionally false" and "utter nonsense".

Meanwhile, before any potential presidential bid in 2024, DeSantis will have to cross swords with another competitor in the upcoming 2022 gubernatorial race. The mainstream American media has recently put a spotlight on Agriculture Commissioner Nikki Fried, the only Democrat elected to statewide office in Florida.

The Democratic contender is known as an outspoken critic of DeSantis: she has already denounced him as a "dictator" over his election policies and accused him of being "confusing" and not "empathetic".

As of yet, however, the state's 4.8 percent unemployment rate, which is well below the national average, and relatively low per capita death rate from COVID-19 appear to make DeSantis unbeatable, with Florida polls indicating strong popular support for the governor.