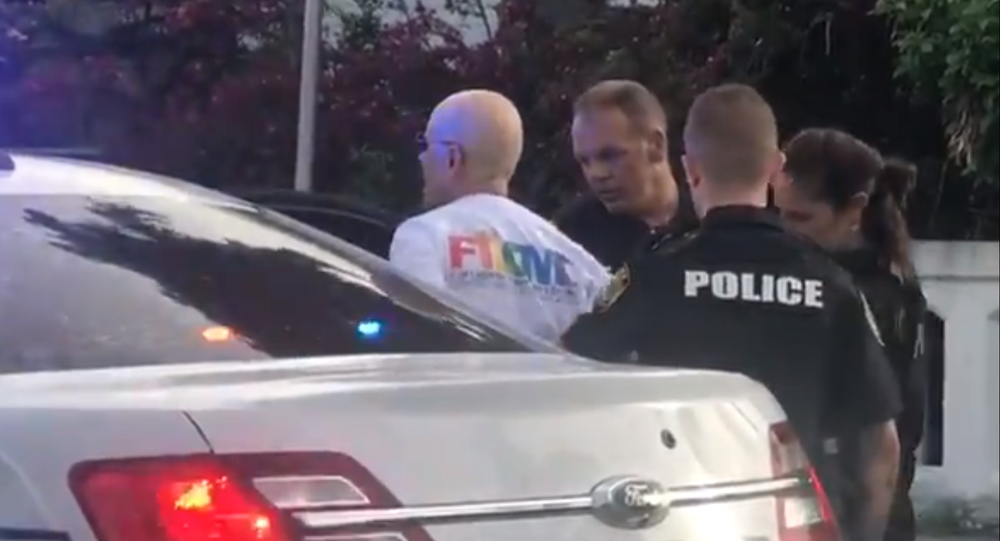 Pride March Cancelled in Florida After Truck Plows Into Crowd, Reportedly Killing One

A man rammed a truck into a group of marchers at a Stonewall pride parade in Wilton Manors, Florida, on Saturday. The mayor of nearby Fort Lauderdale reportedly dubbed the violence a "terrorist attack" on the LGBTQ community.

One person has been killed after a man drove a truck into a crowd of marchers at a Stonewall pride parade in Florida's Wilton Manors. At least two people were struck in the violent attack, according to multiple reports in social media, citing the mayor of Fort Lauderdale.

Wilton Manors police tweeted that the pride march was now cancelled due to a "tragic event", only noting that there was no danger to the public and without providing additional details.

According to The US Sun, the driver of the vehicle was taken into custody, with video posted on social media allegedly showing the moment he was arrested.

​The reports also noted that Fort Lauderdale Mayor Dean J. Trantalis, who appeared to have witnessed the incident, dubbed the violence a "terrorist attack" against members of the LGBTQ community.

"We saw people lining up ready to move and all of a sudden this white pickup truck dashed right through the crowd barely missing Congresswoman Debbie Wasserman Schultz's car by inches", the mayor said, cited by the media outlet.

BREAKING: I just spoke with Fort Lauderdale mayor who tells me one of the people run over in Wilton Manors right before Pride parade started has died. Says another victim is clinging to life. He witnessed the whole thing and says it was a deliberate attack on the LGBTQ community. pic.twitter.com/xW8H20bkfT

​Users shared photos allegedly made on scene after the incident.

Photos from the scene where a truck drove into a crowd taking part in The Stonewall Pride Parade and Street Festival in Wilton Manors. Rep. Wasserman Schultz is seen reacting to the incident. @SunSentinel pic.twitter.com/UAIaa7yRTe

Earlier in the day, another violent vehicular incident took place in Arizona, with a man driving a truck into a group of bike riders participating in a charity race event. An estimated 9 people were injured in the attack, according to reports.