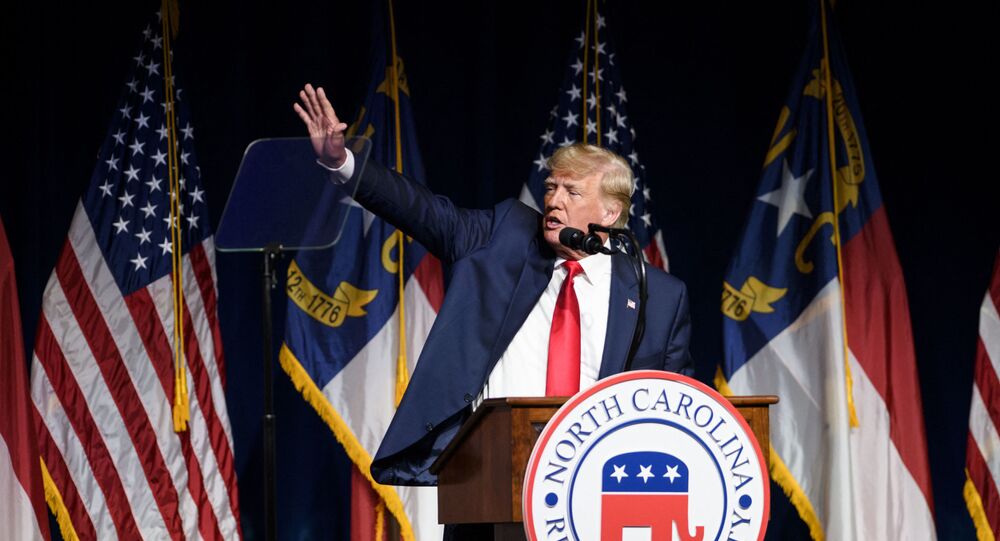 Earlier, a video of US President Joe Biden using "anti-Trump" flashcards at one of his pressers emerged in conservative media outlets, immediately prompting another round of giggles and criticism for the 46th president - not only for relying on cheat sheets, but also for attacking his predecessor's policies.

Attaching a screenshot of a video, where the flashcards can be seen reading "DOJ talking points", Trump rolled out his brief statement.

"Can anybody believe this? No wonder our Country is going to hell!", he posted to Telegram.

The video that revealed Biden's flashcards saying that Trump "abused power", "Now we have to clean it up" and "Trump DOJ out of control" was shown by OAN earlier on Friday.

Conservative figures immediately blasted Biden - not only for using flashcards at pressers, but for criticizing Trump's policies and how he allegedly "needs a flash card to reming him that he thinks everything is a Trump fault".

Joe Biden needs a flash card to remind him that he thinks everything is Trump’s fault.

Do they write when to mumble incoherently onto the cards?

Its obvious by now his words are not his own.

​Some netizens pointed out that Trump also used cheat sheets.

​This is not the first time Biden has been caught using flashcards - he had ones during his first presidential press conference in March and at his summit with Russian President Vladimir Putin in Geneva just days earlier, each time prompting twitterati to humorously fantasize about what those flashcards say.