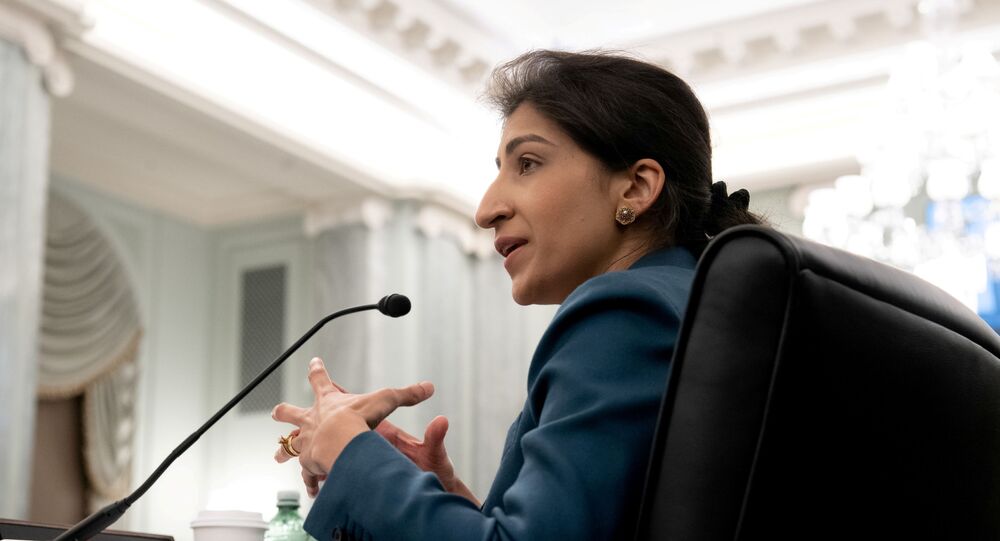 WASHINGTON (Sputnik) - The US Senate confirmed on Tuesday the appointment of Lina Khan as Federal Trade Commissioner, putting a major critic of Big Tech in charge of the country’s domestic trade amid the Biden administration’s crackdown against alleged antitrust practices by firms such as Google and Facebook.

The Senate voted 69-28 to confirm the 32-year-old Khan, making the Columbia University professor the youngest person ever to head the Federal Trade Commission. Her confirmation also signals a bipartisan desire to impose more regulations on Big Tech companies increasingly accused of shutting out smaller competitors to monopolize online search and digital advertising among other activities.

Khan achieved recognition in antitrust circles after writing “Amazon’s Antitrust Paradox” for the Yale Law Review in 2017, while a student at that university. The paper made the case for using a different framework for evaluating competitive harm than the popular consumer welfare standard. That standard essentially says that antitrust law violations can be determined based on harm to consumers, which is often measured based on prices.

But Khan’s criticism was that such a standard could miss significant competitive harm in the modern economy, like predatory pricing that lowered consumer prices in the short term but allows a company that can afford it to quickly gain market share. She also said that by both owning and selling on a marketplace platform, as Amazon did, the online retailing behemoth could exploit information across the ecosystem to undercut the competition.

In recent years, Khan has become a favored advocate for those eager to see more expansive enforcement of the antitrust laws. She also participated in the Congress Judiciary subcommittee’s antitrust investigation into Amazon, Apple, Facebook and Google, helping to compile the report from Democratic staff that found each held monopoly power.

In October, the Justice Department filed an antitrust lawsuit against Google for alleged abuse of online search dominance. It was the most forceful action in more than two decades by the US government to ostensibly protect competition in the online search space since the groundbreaking case that began in the late 1990s against Microsoft. It could also be a precursor to similar antitrust actions against other big tech names.