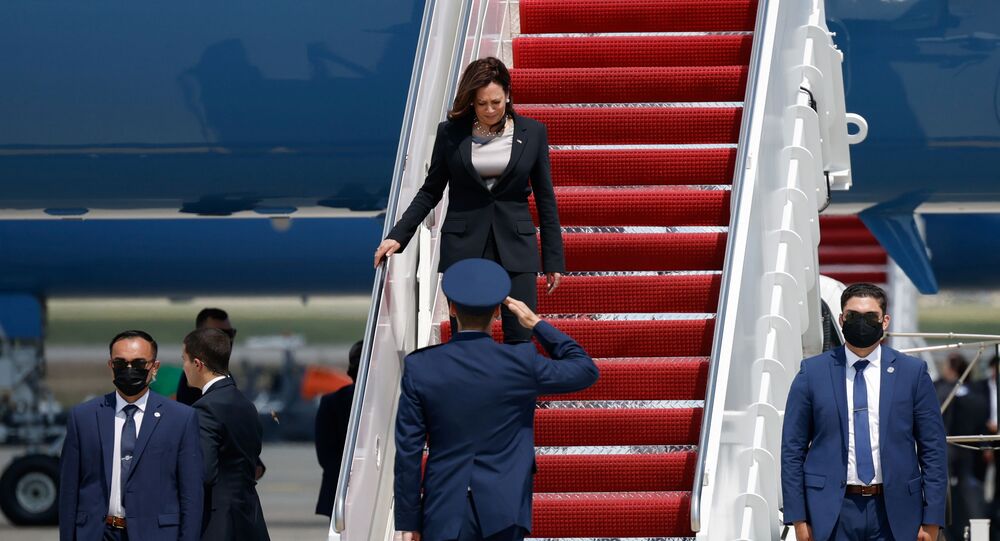 Vice President Kamala Harris, appointed to handle the "root causes" of the daunting migrant influx from Central America, has been severely criticised by Republicans for not planning a visit to the US-Mexico border and being unprepared to answer questions about the immigration crisis.

Republican Rep. Ashley Hinson urged lawmakers on Monday to restrict Vice President Kamala Harris from travelling abroad at the expense of American taxpayers until she visits the US Southern border.

"This crisis is worsening by the day. Yet, the vice president has refused to go to the border herself and talk to the brave law enforcement officers, the men and women who are fighting this on the frontlines. This out-of-sight, out-of-mind approach is a disgrace," she claimed, speaking on the House floor.

Hinson criticised Harris for visiting “yarn shops and bakeries” after “just flying right over the crisis at our southern border to meet with foreign countries with the taxpayer’s checkbook in hand.”

“When asked why she hasn’t visited the border, she laughed. She laughed, and this is no laughing matter. The border crisis impacts the safety and security of every Iowan, of every American. Every state is a border state right now," Hinson said.

FLOOR ALERT: @HouseDemocrats just blocked @GReschenthaler's request to consider @RepAshleyHinson's bill that would force the @VP to see firsthand the border crisis she was tasked with addressing 82 DAYS ago, before, you know, going to Europe. cc: @RepChipRoy pic.twitter.com/hvnQSolfZj

On 8 June, during an interview, NBC reporter Lester Holt noted that Harris hadn’t visited the border yet, and she replied with a laugh that “she hasn’t been to Europe".

“I mean, I don't understand the point that you're making. I'm not discounting the importance of the border," she said.

Her answer was considered by many administration critics as excessively nervous and indicating vice president’s lack of preparation as such question have become quite regular since she was appointed responsible for overseeing the immigration crisis.

Last week, Harris travelled to Guatemala and Mexico as part of Biden’s administration efforts to tackle the root causes of the migration wave. She pledged to fight corruption and human trafficking, dissuading migrants from illegally crossing the US border.

Recently the US Customs and Border Protection revealed that the levels of illegal immigrants, who managed to cross the southern border has exceeded the latest peak, registered back in 2006. According to latest data, nearly 180,000 migrants has been detained over the last month.