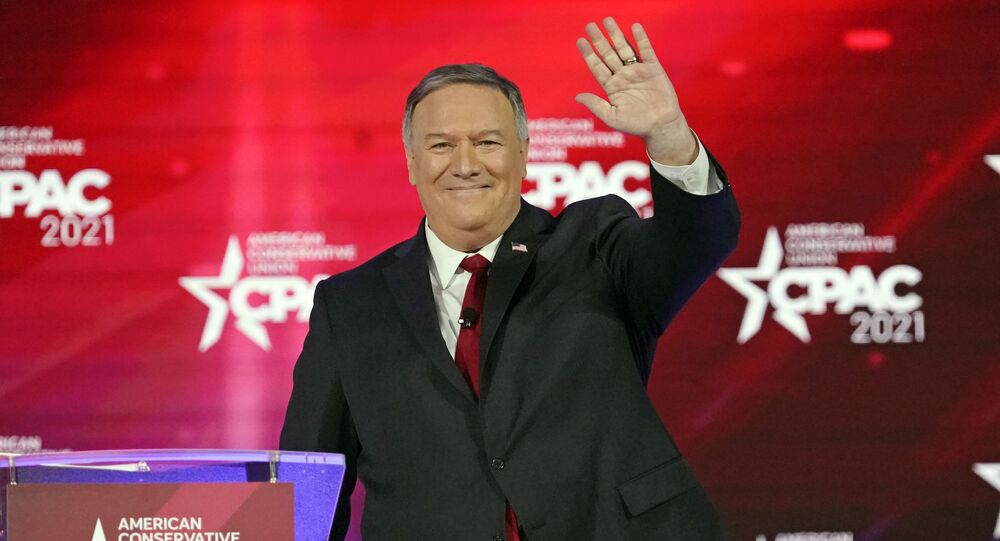 Biden's 'America Is Back' Means Moving Back to Times When It Was 'Weak', Pompeo Says

Pompeo, who served as secretary of state in the previous administration, remains one of the most loyal supporters of former President Donald Trump and his "America First" policy, and at the same time a rather media personality, which has prompted some rumors about a possible presidential bid in 2024.

Former US Secretary of State Mike Pompeo stated on Sunday that when the Biden administration talks about "taking America back," he believes they are referring to the Obama administration's terms, when "America was weak."

On "Fox News Sunday," Pompeo was asked to comment on Secretary of State Antony Blinken's interview, which aired shortly before his, in which he said that the Biden administration was returning the United States to the Obama years.

"Well, generically, when I hear the administration talk about taking America back, they are talking about back to what President Obama did for eight years where America was weak," said Pompeo. "We might have been liked -- a lot of people talk about how they are having this really fun time over at the G-7, everybody likes President Biden. What's important is not that they like America, but that they respect us, that we deliver good outcomes for the American people."

Looks CGI ish to me which would mean he is well protected, insulated and safe 🇺🇸🇺🇸🇺🇸 pic.twitter.com/c4wlFGNAWl

​"We need to focus on the things that matter most to America," he added.

Pompeo moved on to emphasize his reservations about climate change being at the top of the G7 agenda, claiming that initiatives like the Green New Deal will not improve the lives of Americans.

Later in the interview, the former secretary of state pushed back against claims that President Trump was soft on Russia.

"We shut down 10,000 jobs with the Keystone Pipeline here in the United States of America and then they permitted the Russian pipeline to continue to be built that will threaten the heart of Europe's energy infrastructure and of course you were referring to the cyberattack on the Colonial Pipeline," Pompeo said. "President Trump and our team were very clear about what we would do in response to cyberattacks. We changed. It's a pretty arcane idea, but we changed the NSPM, the rules that permitted us to respond to these attacks. I hope that the Biden administration will use the tools that we provided."

He also said that the Trump administration "had imposed real sanctions on the ships that were doing the construction" of Russia's Nord Stream 2.

"We made clear that that pipeline was not going to be completed. It would not have been completed had we had four more years, I’m very, very confident of that,” he added.

"And with respect to human rights, I -- we take a backseat to no one. I heard Secretary Blinken talk about the work they're doing to try and convince the Europeans to stand alongside us on human rights violations in China and the work that they've done defending human rights against Russian abuses. We were tough there too, Chris. I’m proud of the work we did there. It was good work. It was serious work and it made a difference,” the former state secretary concluded.

In April, Pompeo joined Fox News as a contributor for the network, as he pledged "to give viewers a candid, no-nonsense look at geopolitics, international relations and the America First policies that helped chart the course for unprecedented American prosperity and security."

Frontrunner or Outsider: What May the Future Hold for Mike Pompeo if He Runs for Presidency in 2024?