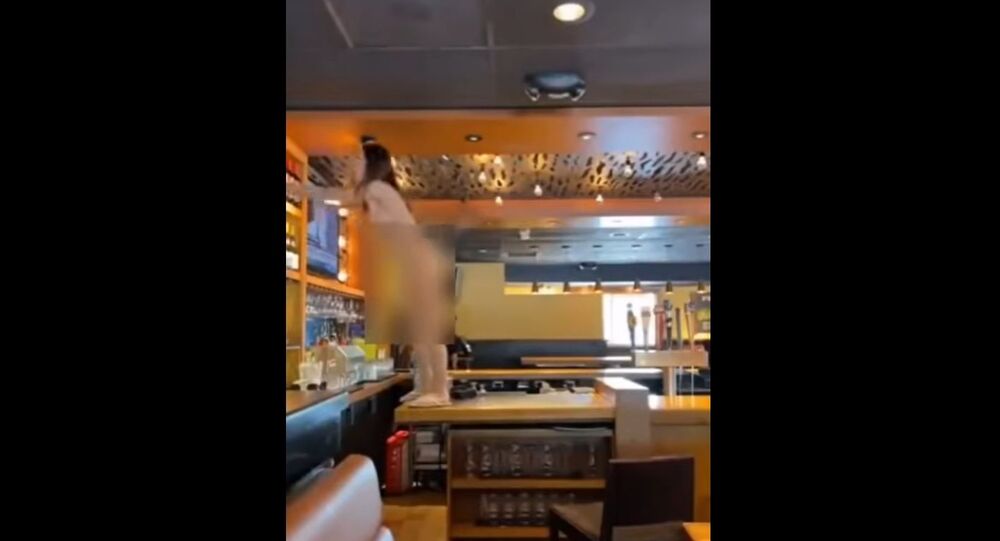 That’s what they call ‘Happy Hour’ in Florida, according to viewers of restaurant-trashing spree.

A video showing an “out of control” woman throwing bottles around an Outback Steak House in Florida in nothing but her flip flops is making the rounds on social media, as viewers joke that the naked lady probably didn’t like the service there at all.

Tina Kindred, 53, was arrested last week after going on a restaurant-crushing rampage: first in Mojo Grill on Silver Springs Boulevard, where she said she was denied service, and then in the Outback restaurant on the same road.

Kindred, who was filmed throwing bottles and glass all over the steak house, said she'd come in with the purpose of destroying the bar.

After the woman tossed several bottles at an arriving officer from Ocala Police Department, Kindred was quickly Tasered in her breast until she was seen lying on the ground. In one of the clips from the scene, the handcuffed woman could be heard shouting that “the world is gonna end” and that it’s going to be “only me and Bill Gates”.

Following the arrest, Kindred was transported to Advent Health, according to the sheriff’s report cited by Ocala-News.com. Apparently, no narcotics except for THC – a psychoactive constituent of cannabis – were found in her system.

The woman was charged with aggravated battery on law enforcement and felony criminal mischief, and is expected to appear in court on 6 July.

According to social media users, the viral clip showed nothing more out-of-the-ordinary than “happy hour” in Florida, while some quipped that this is what happens “when you ask for your steak to be cooked medium and it comes out well done”.

In Florida, a naked 53-year-old woman trashed an Outback Steakhouse and had to be tasered by police.

Or, as they call that in Florida, Happy Hour.

She’s 53? More shocking to me than her crazy, naked rampage is how she can have a body like that at 53.

How is everyone there not laughing? 😂

I guess this passes for normal in Florida, huh?