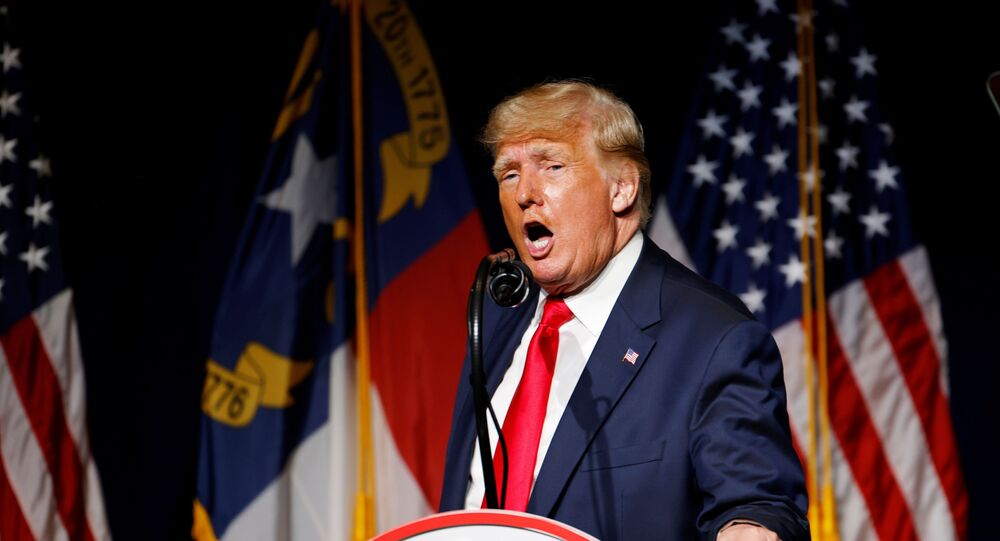 During his speech, the 45th US president launched a scathing attack on the Biden administration, accusing it of undermining American democracy and turning the country into a sanctuary for criminal aliens, a reference to the migrant crisis on the southern border with Mexico.

Former US President Donald Trump has been mocked by social media users for a gaffe he made at a Republican Party gathering in North Carolina. While criticising calls to defund the police, the 74-year-old said that Republicans are going to "defund" freedom.

"Crime is exploding, police departments are being ripped apart and defunded. Is that good politics, defund our police? The survival of America depends on our ability to elect Republicans at every level. Together we're going to defund our freedoms just take a look at what's happening", Trump said.

He then quickly tried to cover his mistake, saying: "We have to defend our borders, we have to do all of these things".

​Trump's gaffe prompted a torrent of sarcastic comments, with users wondering whether it was a Freudian slip or Trump really meant what he said.

Can we really be sure that isn't what he meant?

A rare moment of accidental honesty.

One user joked that this was Trump's slogan for the 2024 presidential campaign.

Others deemed that the politician is getting old and suffering from a decline in his mental abilities, arguing that he has little chance of winning if he throws his hat into the 2024 presidential race.

Embarrassing cognitive decline.
I hate to admit it,I feel sorry for him. Sad

His energy is completely gone.

He's a shell of the man he was when he ran in 2016, I don't think his chances are nearly as good as he likes to think they are.

​Still others imagined how the audience reacted to the slip of the tongue and reminded how Trump and Republicans mocked Joe Biden for gaffes.

"We’re going to defund our freedoms."
- Trump. And yet Biden was the "gaffe machine" during the election https://t.co/03YzksFVU9 pic.twitter.com/lF6KuB1XU8

​During his speech, Trump harshly criticised the Biden administration, claiming the county is being "demeaned" and "humiliated". The Republican alleged that the Democrat is openly being mocked by China and Russia and drew attention to two major cyberattacks on the Colonial Pipeline and the meat processing company JBS.