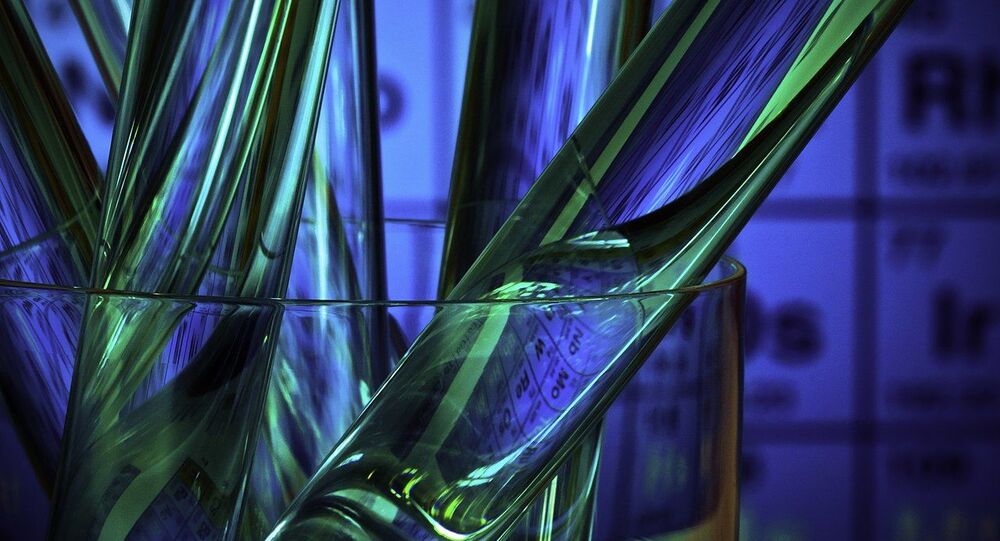 Last week, the Chinese Foreign Ministry accused the US of failing to be interested in "serious scientific tracing" of COVID-19's origins after President Joe Biden pledged to push Beijing to take part in a full-blown international investigation into where the virus came from.

US National Institutes of Health Director Francis Collins has denied ever rejecting the theory that the COVID-19 pandemic originated in China’s Wuhan laboratory, but insisted that animal-to-human transmission was the most plausible explanation for the outbreak.

In an interview with Fox News on Wednesday, Collins pointed to a spate of “conspiracy theories” which he said were meant to support claims that China is ostensibly using the coronavirus as part of an “engineered bioweapon”.

According to him, the claims don’t “fit with what we know about this particular viral genome”.

© AP Photo / Ng Han Guan
Journalists gather near an electric fence looking into the P4 Lab in the Wuhan Institute of Virology as the World Health Organization team visit on a field trip in Wuhan in China's Hubei province on Wednesday, Feb. 3, 2021

“[…] Then there was this other idea that maybe it was an accident lab leak, that the institute had been studying this virus that had happened somehow in nature and it got loose. I never rejected that one, although there was no evidence to support it”, Collins added, referring to the Wuhan Institute of Virology.

"I don't think we know what happened in Wuhan. It is possible there was a lab leak. But again, that's an extraordinary claim. What we need then is to have an evidence-based, expert-driven investigation”, Collins underscored.

The interview was preceded by Chinese Foreign Ministry spokesperson Zhao Lijian claiming last week that the White House "doesn't care about [the] facts and truth" pertaining to the origins of the COVID-19.

He also argued that the Biden administration “wants to use the [COVID-19] epidemic to engage in stigmatisation and political manipulation, and to shirk responsibility”.

According to the spokesman, “this is disrespectful to science and irresponsible to people's lives, and moreover, it undermines the global unity of efforts to fight the [coronavirus] epidemic”.

Zhao called on the US to open itself up to investigations into its own biological laboratories, including those located at the Naval Medical Research Centre's Biological Defence Research Directorate at Fort Detrick in Maryland, which is “full of suspicions”.

The spokesman's comments came after US President Joe Biden stated that he was giving his country's intelligence agencies 90 days to obtain and analyse more information on the origins of COVID-19.

Biden pledged that his administration would go ahead with efforts to prod China to “participate in a full, transparent, evidence-based international investigation and to provide access to all relevant data and evidence”.

The POTUS added that although the US intelligence community had "coalesced around two likely scenarios", they had yet to conclude whether the coronavirus emanated from contact between humans and animals, or from a research laboratory in China's Wuhan Institute of Virology.

Andy Slavitt, Biden's senior adviser on COVID, for his part, stressed that the international community needs to “get to the bottom [of the matter] …whatever the answer may be”.

“We need a completely transparent process from China; we need the WHO [World Health Organisation] to assist in that matter. We don't feel like we have that now”, Slavitt asserted.

This came after a Wall Street Journal report suggested, citing intelligence data, that three laboratory employees in Wuhan became sick in November 2019 with symptoms similar to those caused by the coronavirus. According to the newspaper, this may be a sign that COVID-19 originated in a laboratory.

© CC0
Exact Origins of COVID-19 Unknown, Head of US Intel Says
However, the Office of the US Director of National Intelligence previously stressed that the intel community does not know exactly where, when, or how the virus was transmitted initially.

In late March, the WHO released a report concluding that the coronavirus outbreak was “extremely unlikely" caused by a leak from the lab in Wuhan, and that the virus was most probably transmitted to humans from bats via an intermediary animal.