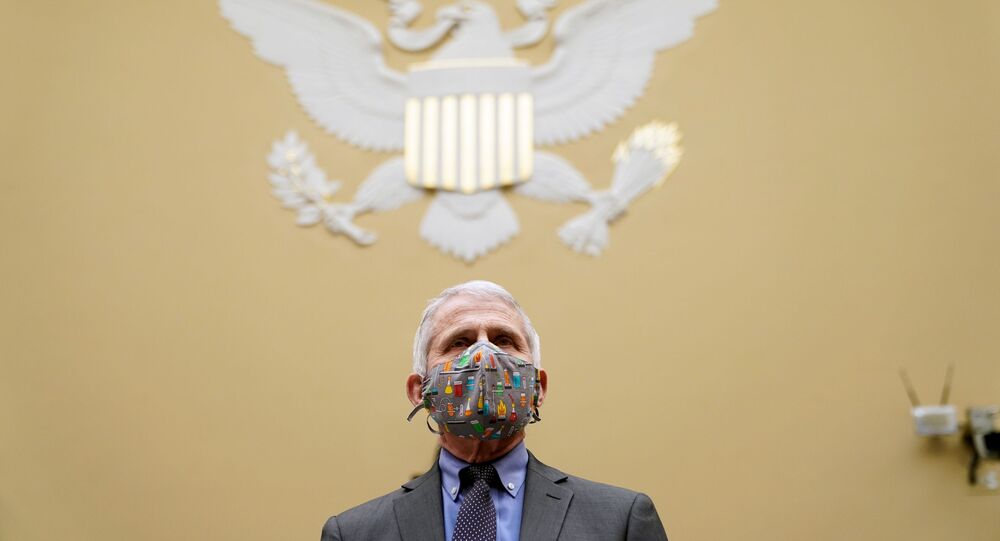 A recent leak of emails has sparked heated discussion about Fauci and his role in the US response to the coronavirus.

Dr Anthony Fauci, the chief medical adviser to the US president, has claimed that recent revelations suggesting he was warned at the very outset of the pandemic that COVID-19 may have been “engineered” had been “taken out of context”.

“The only trouble is they are really ripe to be taken out of context where someone can snip out a sentence in an email without showing the other emails, and say 'based on an email from Dr Fauci, he said such and such' where you don't really have the full context”, Fauci said in the interview with NewsNation Now anchor Leland Vittert on The Donlon Report.

Fauci’s explanation comes after the emergence of more than 3,200 pages of what BuzzFeed says are the doctor's emails dating back to the beginning of the coronavirus pandemic, published by the media. The messages covered the period between January and June 2020 and showed how Fauci dealt with the massive flow of information as the COVID pandemic began to ravage the United States.

© AFP 2021 / STEFANI REYNOLDS
Dr Fauci's Book Vanishes From Amazon Amid Surfacing of His Emails
​In particular, the emails revealed that Fauci spoke to a former Obama administration health adviser, discussing antiviral treatment, and also got in touch with Facebook CEO Mark Zuckerberg, as the latter announced the creation of an "information hub" about the coronavirus and asked whether the platform could be of help in accelerating testing protocols.

Among the messages were also emails revealing leading virus experts warning him that COVID-19 may have been created in a lab.

Fauci has played down such claims in public. Recently, however, the US COVID-19 tsar said he was “not convinced” that the virus had evolved naturally.

“I think we should continue to investigate what went on in China until we continue to find out to the best of our ability what happened”, Fauci said during an event called "United Facts of America: A Festival of Fact-Checking".

Earlier this month, Biden ordered members of the US intelligence community to produce a report in 90 days to put an end to the debate over whether the coronavirus spread to humans from animals naturally or if it leaked from a laboratory in China, and promised to release the report in full. The same day, the Office of the Director of National Intelligence stated that the agency did not know the exact origins of the coronavirus at the time.

© REUTERS / POOL
Fauci Believes US to See 'Turning Point' of COVID-19 Pandemic Course in Near Future - Report
The Chinese Foreign Ministry rejected US media reports suggesting that three employees of the Wuhan Institute of Virology fell gravely ill just before the COVID-19 outbreak.

According to a recent report by a WHO international expert group on a mission to Wuhan, the coronavirus outbreak was unlikely caused by a leak from the lab in Wuhan, suggesting instead that the virus had most likely been transmitted to humans from bats via an intermediary animal.