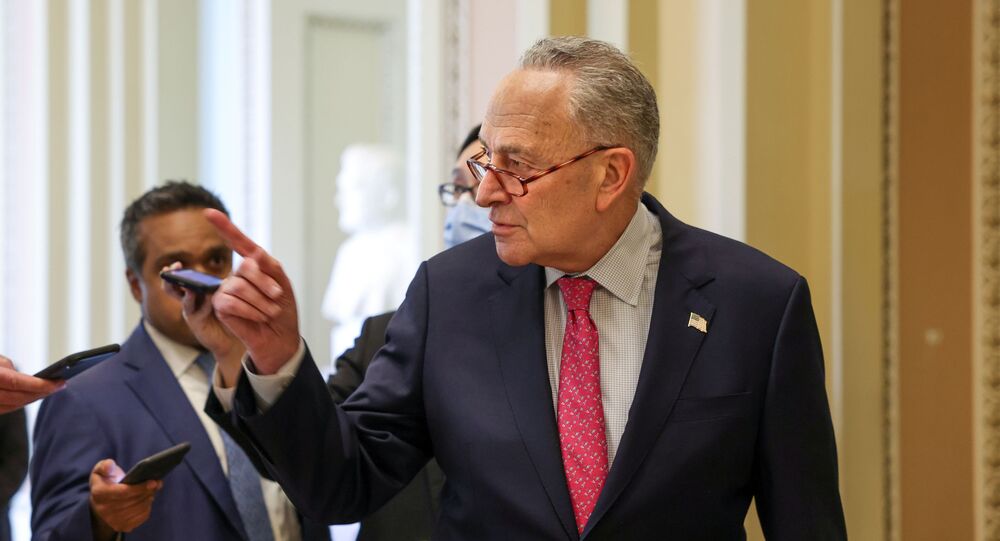 Senate Majority Leader Chuck Schumer (D-NY) sent a letter to his colleagues on Friday saying that the Senate will vote on the "For the People Act," also known as H.R.1 or S.1, at the end of next month.

“In the last week of the June work period, the Senate will vote on S.1, the For the People Act, legislation that is essential to defending our democracy, reducing the influence of dark money and powerful special interests, and stopping the wave of Republican voter suppression happening in the states across the country in service of President Trump’s Big Lie,” Schumer said in the letter.

In a Dear Colleague letter, Senate Majority Leader Chuck Schumer announces a pretty ambitious schedule with a vote on S1 during the last week of June. pic.twitter.com/o67dexFMg9

​The letter was shared shortly after Republicans successfully launched their first filibuster of the 117th Congress, blocking the creation of a bipartisan commission to probe the January 6 riot at the US Capitol.

Schumer condemned Republicans for blocking consideration of the bill. “Shame on the Republican Party for trying to sweep the horrors of that day under the rug because they’re afraid of Donald Trump,” he said in a floor speech.

Sen. Schumer after a failed vote on a Jan. 6 commission: "The Republican minority just prevented the American people from getting the full truth."

"Shame on the Republican Party for trying to sweep the horrors of that day under the rug because they're afraid of Donald Trump." pic.twitter.com/t63QMG5aNX

​Senator Mitch McConnell (R-KY) had worked to convince his fellow colleagues to block the bill, because he claimed Democrats would use the commission against his party ahead of the 2022 midterm elections.

Schumer denied the political implications of a January 6 commission, claiming that the truth about the riot was necessary in order to restore American confidence in democracy.

"I'm sorry if an independent commission to study an attack on our democracy isn't a Republican ad maker's idea of a good time," Schumer said. "This is too important, too important. We cannot let the big lie fester. We cannot let faith in our elections continue to erode. We must get at the truth and restore Americans' confidence in this beautiful, noble ongoing experiment in democracy."

The failed commission vote marked the first GOP filibuster of Joe Biden’s presidency. The infamous chamber filibuster rule requires that most legislation receive the support of at least 60 members in order to pass, lest they face the threat of opposed senators speaking nonstop on the floor, stalling all other business in the chamber.

In his letter, Schumer maintained that the events of January 6 would be probed, even if he had to force another senate vote on the bill.

"Senators should rest assured that the events of January 6th will be investigated and that as Majority Leader, I reserve the right to force the Senate to vote on the bill again at the appropriate time," Schumer wrote.

The filibuster is the biggest concern for Democrats when it comes to passing legislation such as the voting rights bill. At least one Democrat, centrist Senator Joe Manchin (D-WV), has expressed resistance to some elements of the reform package, and maintains that he wants bipartisan buy-in for the bill.

When asked if he would vote to end the filibuster on Thursday, under expectations that Republicans would block the commission, Manchin replied, “I’m not willing to destroy our government, no.” Following the filibuster on Friday, Manchin told reporters that he was disappointed in the move.

In his letter to Congress, Schumer also added that they would continue to make progress on President Biden’s “Build Back Better” economic agenda.