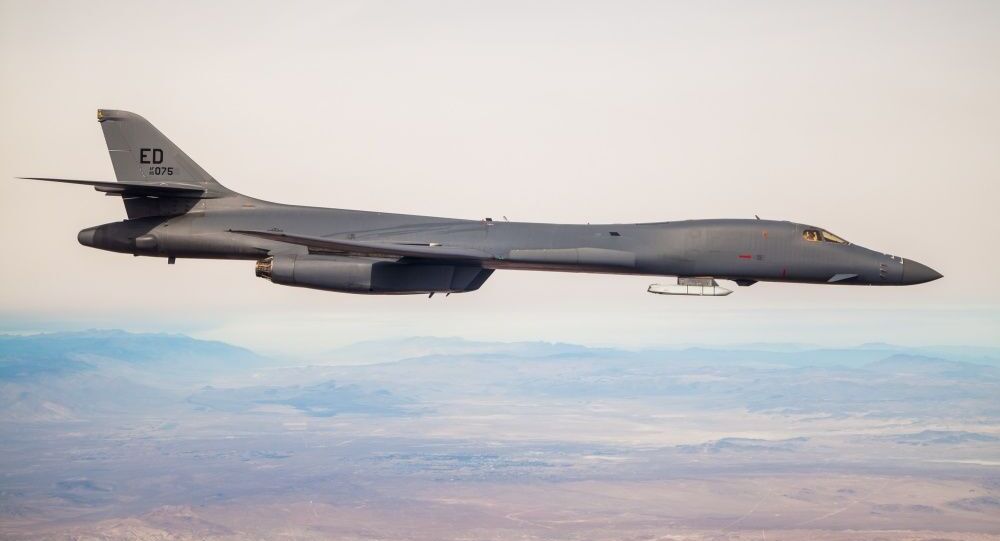 To pay for the Pacific Deterrence Initiative, the Pentagon is reportedly seeking to divest some of its older equipment with higher maintenance costs. The initiative focuses on opposition to China in the Indo-Pacific and intends to improve US preparation by supporting radars, satellites, and missile systems in the region.

According to the sources, the defense budget request, which will be given to Congress on Friday, would include expenditures in troop readiness, space, the Pacific Deterrence Initiative to offset China's military buildup in the region, and nuclear weapons technology.

The budget request would reportedly fund the purchase of ships and airplanes, as well as maintenance and wages, but an extra $38 billion is set aside for defense-related programs at the Federal Bureau of Investigation, the Department of Energy, and other agencies, bringing the total national security budget to $753 billion, which is a 1.7% increase above the number for 2021.

© REUTERS / Jo Yong hak
Biden to Propose $6Tln US Budget for 2022, Highest Deficit Since WW2, NYT Says
As the military seeks to strengthen capabilities to compete with Russia and China, money will reportedly be allocated to further develop and test hypersonic missiles and other "next-generation" weapons systems.

According to the report, the US Army's troop goal in the budget was cut by a small margin. Moreover, the Biden administration will reportedly request 85 stealthy F-35 fighter fighters from Lockheed Martin as part of the Pentagon's competing objectives.

Although the presidential budgets for 2021 and 2020 requested only 79 and 78 F-35 fighter airplanes, respectively, Congress ultimately approved additional jets. Senators and governors have strongly supported the F-35, which has a large manufacturing base.

The US Navy's shipbuilding plan through 2022, released in the final months of Trump's presidency, included 12 additional surface combatant ships. However, according to sources, Biden's request only includes eight new warships.

While reducing the numbers of outdated systems, the Biden administration will continue to invest in modernizing the US nuclear triad, an expensive project that the Congressional Budget Office estimated will cost more than $60 billion per year on average over the next decade and more than a trillion dollars in total.

The money will be used to upgrade nuclear command and control, as well as delivery systems such as Huntington Ingalls Industries and General Dynamics' Columbia Class nuclear submarines and the certification of the stealthy F-35 jet fighters to carry nuclear bombs.

Presidential budget requests, especially military ones, are frequently used as a starting point for negotiations with Congress, which ultimately determines how money is spent.

Military strategists in the United States are concerned about rising tensions with China. After a US warship went through the Taiwan Strait again last week, Beijing accused the US of endangering the peace and stability of the waterway.

Moreover, under the previous administration, the number of flights of spy planes patrolling along the borders of China increased dramatically in comparison to previous years. And under Biden, that number has increased even more, as in February US spy planes carried out a record 75 missions near China.

© REUTERS / POOL
Blinken Says US Has to Deal With China, But Relationship Remains Complicated
The incumbent administration's top officials, including US Secretary of State Antony Blinken, described the US' relationship with China as the biggest geopolitical test for the nation in the twenty-first century, one that must be tackled from a position of strength. To deal with China, the US adopted a policy of rebuilding alliances and re-engaging international institutions. The US regards China as the only country capable of "seriously challenging" the global system.

In February, Joe Biden’s pick for Director of the Central Intelligence Agency (CIA), William Burns, told the US Senate Intelligence Committee that Biden views eclipsing China in the great power competition in the ensuing decades to be the top national security challenge and one that will require “long-term, clear-eyed, bipartisan strategy, underpinned by domestic renewal and solid intelligence.”