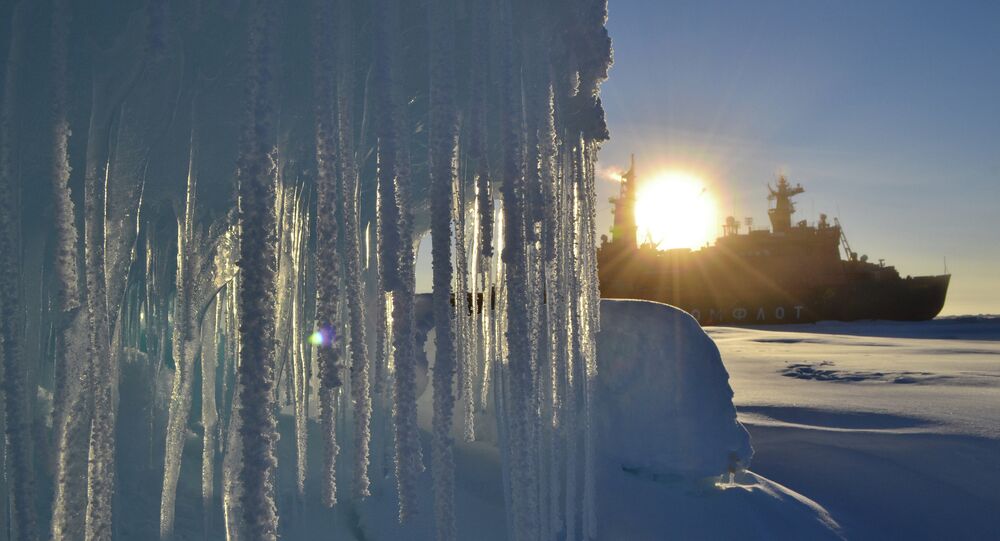 The US military activities in the Arctic and the South China Sea are fraught with tremendous risk of inflaming conflicts with Russia and China, says American peace activist Jan R. Weinberg. What's worse, the militarisation of crucial shipping lanes could backfire on international trade and economies, he argues.

"The regulatory scheme that Russia has put forward does not give due regard as required by international law to navigation rights, freedoms of the territorial seas and exclusive economic zone," Blinken said, stressing that Washington "ha[s] and will respond" to this.

Responding to Blinken's criticism, Russian Foreign Minister Sergey Lavrov emphasised that "it has been absolutely clear for everyone for a long time that this is our territory, this is our land," referring to Russia's Arctic coast, related internal waters and exclusive economic zone (EEZ).

The US-Russia dispute over the Northern Sea Route (NSR) – also referred to as the Northeast Passage – has been flaring for quite a while and goes as far back as the 1960s. According to Moscow, NSR is a national transport route and subject to national legislation on historical grounds. Most of the NSR goes through Russia's internal waters or EEZ with special national rules of navigation being applied to the passage.

The US does not agree with this approach and considers some of NSR's straits to be international to which the regime of transit passage applies, citing the United Nations Convention on the Law of the Sea (UNCLOS).

While the row has on many occasions been resolved peacefully, the US Department of Defence's new Arctic doctrine and Secretary Blinken's renewed criticism of Russia have added a new dimension to this issue, according to Jan R. Weinberg, an American peace activist and founder of 'Show Up! America'.

According to the DoD, US interests in the region include "maintaining flexibility for global power projection, including by ensuring freedom of navigation and overflight." To that end, the Pentagon undertakes to "strengthen the existing, international rules-based order in the Arctic" to "deter strategic competitors from specific, aggressive acts and from unilaterally seeking to change norms governing access to the region."

© AP Photo / Staff Sgt. Daniel Love
In this Oct. 25, 2016 photo provided by the U.S. Army Alaska, paratroopers secure an area in view of the aurora borealis, or northern lights, during night live-fire training at Fort Greely, Alaska. The battalion spent much of Exercise Spartan Cerberus in subzero temperatures training in Arctic, airborne and infantry tasks.

US Pursues Its 'Hegemonic Interests' in South China Sea and NSR

The Pentagon's self-declared goal of sustaining a rules-based freedom of navigation order in the Arctic resembles nothing so much as Washington's justification of its military presence in the South China Sea, the peace activist suggests. In both cases, however, the US vows to protect UNCLOS rules which it has failed to ratify so far, he adds.

"It is patently absurd, while calling out other nations, that the United States has not ratified The United Nations Convention of the Law of the Sea (UNCLOS)," Weinberg notes. "I have not heard Secretary of State Tony Blinken advocate for the United States to ratify the UNCLOS treaty which would certainly lend authority to his accusations about the misuse of Russian and Chinese claimed Exclusive Economic Zones (EEZ)."

The South China Sea accounts for a third of global maritime trade with 80 percent of China's energy imports passing through this waterway. The South China Sea maritime dispute appears to be more complicated than that involving the Northern Sea Route: China is laying claims to a large portion of the sea with all islands and their adjacent waters in accordance with its "nine dash line" concept. Neighboring nations have their own competing claims in the sea which makes it a highly contested area.

The Spratly Islands, comprising Subi Reef, Northeast Cay, Southwest Cay, South Reef, and Sandy Cay, are claimed by China, requiring prior permission or notification of transit under innocent passage in its territorial sea.

The United States, which is not part of the maritime dispute, has nevertheless declared itself an "arbiter" and protector of UNCLOS rules by dispatching warships to the region to conduct regular freedom of navigation operations (FONOP) there without requesting permission or providing notifications. Washington argues that none of the nations involved in the dispute has formally made a legal claim to a territorial sea around these features, according to Harvard's Belfer Centre. However, Beijing has repeatedly signaled that it considers these passages provocative and a "serious infringement on China's sovereignty."

What the US Navy is really protecting in the South China Sea are Washington's hegemonic interests, according to Weinberg, who asserts that America's "Pivot to the Arctic" is about the same thing. While the South China Sea is carrying over $3 trillion in trade annually, the Arctic accounts for 22 percent of the world's hydrocarbon resources, the peace activist remarks. "I believe that is why our military is there, even though they give lots of other reasons," he notes.

To assert its presence in both areas, the Pentagon is conducting a wide range of military exercises in the Arctic and in Indo-Pacific, including those involving the US' NATO allies and partners, Weinberg notes.

·      the Malacca Strait, a waterway connecting the Andaman Sea and the South China Sea and a key oil trade chokepoint;

·      the Bering Strait, a strait connecting the Pacific and Arctic Oceans between Alaska and Russia and the most eastern point of the NSR.

The US-NATO military deployments near these crucial areas not only pose a threat to China and Russia, but also create a grave danger to international trade by stepping up risks and increasing potential costs, according to the peace activist.

"While Blinken professes to be 'worried that the increased militarisation [of the Arctic on the part of Russia] will lead to bigger problems' the United States conducted, under the auspices of the Indo-Pacific Command the Northern Edge 2021 military exercises which are based out of Alaska," the peace activist says.

The US military deployment in the Arctic under the pretext of the alleged challenge posed by Moscow in its turn creates a threat to Russia, Weinberg highlights. Similarly, Barack Obama's military deployments in Indo-Pacific region and FONOPs in the South China Sea within the framework of Pivot to Asia were perceived as a threat by the People's Republic of China.

The similarity of the "Pivot to Asia" and "Pivot to the Arctic" is hardly surprising given that many Obama-era politicians have joined Joe Biden's cabinet, the scholar points out. Some of them came to politics from US military industrial corporations through so-called "revolving doors" policies, Weinberg notes, referring to Secretary of Defence Lloyd Austin, who used to work on Raytheon Technologies' board.

The parallels don't end here: by beefing up its military presence in the respective regions, the US is equally pouring salt in Russia and China's wounds, according to the peace activist. Thus, Washington's agreement with Norway on building new US military deployments near Russia's borders evokes strong memories of the Cold War and the West's failure to deliver on its promise to not expand its NATO alliance eastward.

When it comes to China, the US naval presence in the Indo-Pacific coupled with Britain's dispatching of an aircraft carrier strike group led by HMS Queen Elizabeth there brings to mind the West's Opium Wars against China and the Century of Humiliation, according to Weinberg.

The peace activist insists that those at the helm in NATO nations should bear these historic reminiscences in mind to avoid further escalation before it's too late.

China Interested in Cooperation With Russia on Arctic Station Project