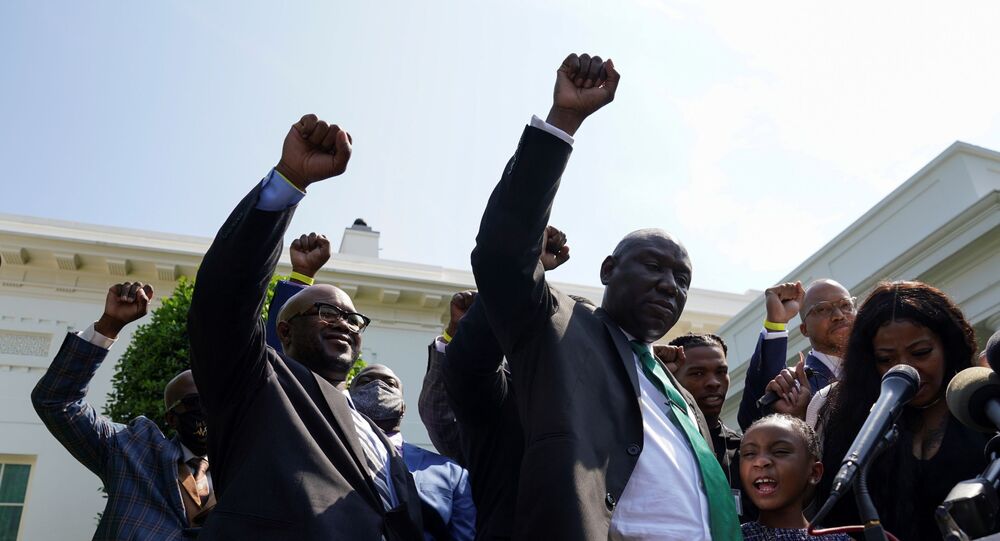 Last month, US President Joe Biden urged Senate Republicans to support the Democrats' "George Floyd Justice in Policing Act" by 25 May, the anniversary of Floyd's death at the hands of Minneapolis officers.

The family of African American man George Floyd has called to pass a US police reform bill being stalled by a host of policy disputes in the Senate.

The call came as Floyd's loved ones met top Democratic congressional leaders, President Joe Biden, and Vice President Kamala Harris on 25 May, the first anniversary of Floyd's death at the hands of a white police officer in Minneapolis.

Another brother, Terrence Floyd, stressed that he had been pleased with what he called a "productive conversation", during which Biden and Harris were eager to "actually give an ear to our concerns".

Ben Crump, the family's lawyer, for his part, said Biden told them "that he doesn't want to sign a bill that doesn't have substance and meaning so he is going to be patient, to make surest it is the right deal, not a rush bill".

"This is a police issue. This is a civil rights issue. We have to look at this as a national issue that we have avoided dealing with for far too long", Crump pointed out.

Biden said in a statement following the meeting that he appreciates "the good-faith efforts from Democrats and Republicans to pass a meaningful bill out of the Senate".

"It's my hope they will get a bill to my desk quickly. We have to act", he added.

The statement followed POTUS saying last month that "Congress should act" in order "to get it [the police reform bill] done next month, by the first anniversary of George Floyd's death".

At least 10 Republican senators need to back the bill, titled "the George Floyd Justice in Policing Act" for it to pass. GOP lawmakers have raised concerns about the proposed legislation regarding qualified immunity, a policy that makes it difficult for an individual to sue a law enforcement officer.

Senator Cory Booker, who is at the helm of Senate Democrats' talks with Republicans on the bill, said the two sides remain at odds over key issues but that he remains upbeat that an agreement can be reached.

© Sputnik
One Year Later: Americans Remember Floyd on Anniversary of His Death in Police Custody - Photos
On 25 May 2020, African American man George Floyd was killed by then-Minneapolis police officer Derek Chauvin, who pressed his knee to the 46-year-old's neck for over nine minutes. A trial determined "beyond [a] reasonable doubt" that Chauvin's actions violated police rules of engagement and was a major factor in Floyd's death.

Floyd's death triggered mass protests all across the United States, where demonstrators denounced police brutality and demanded justice for Black Americans who had suffered at the hands of US police officers.