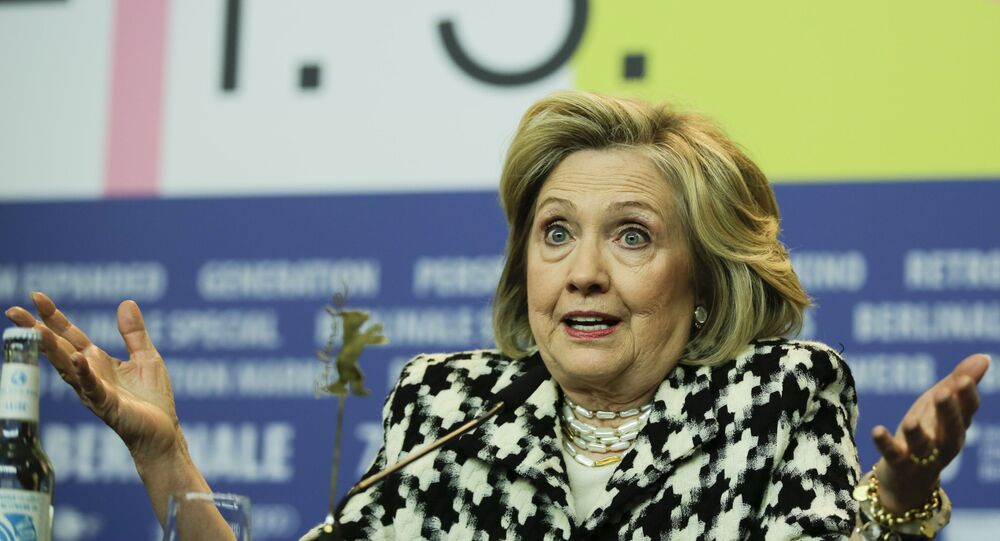 Supporters of the QAnon theory believe a group of high-profile Democrats and Hollywood celebrities, including Hillary Clinton and investor George Soros, worship Satan and engage in cannibalistic rituals as part of a worldwide child sex trafficking ring.

Hillary Clinton has weighed in on the QAnon conspiracy theory that she's part of a secret cabal of “Satan-worshipping Democrats” who are not averse to “sipping the blood of tortured children."

The comments were made by the one-time Senator, Secretary of State, and presidential nominee during a spin-off show that centered around Sacha Baron Cohen's 2020 "Borat" movie.

"I know you've heard a few things about me that you'd like to believe. And I know that you're not alone," Clinton said in an episode of the six-part documentary series “Debunking Borat," released on 25 May on Amazon Prime.

Thank you @HillaryClinton for talking to my friends Jim and Jerry from Borat. And thanks for clarifying that you don’t drink the blood of children — an ugly lie spread by social media and rooted in antisemitism and misogyny. #StopHateForProfit pic.twitter.com/j5nMNMhbvr

​"It's hurtful. I'll be really honest with you. It's hurtful not just to me and my family, but to my friends and other people to know that this is not just false, but sometimes painfully false,” says Clinton in a recorded message for Jim Russell and Jerry Holleman.

In the mockumentary, released in October 2020, where Sacha Baron Cohen pulls numerous controversial pranks, the two men allow his character to take refuge in their cabin during the pandemic. There they accost the “misogynist Kazakh journalist Borat” with a blood-curdling account of how “evil” the Clintons are.

"Mostly they torture these kids, it gets their adrenaline flowing in their body, then they take that out of their adrenal glands, and then they drink their blood and that," said Russel.

Hillary Clinton’s name has been closely associated with this conspiracy theory for years.

QAnon followers believe that the chemical produced by the oxidation of adrenaline is a magical elixir that Satanic pedophiles thirst for, as they harvest adrenochrome from slain and tortured children. The chemical, incidentally, genuinely exists, but there's no evidence of it having any medical benefits.

The final episode of Debunking Borat Clinton condemns the “falsehoods” as she urges “unity”:

"So just as one American to another, I hope that we can start trying to find some common ground again and overcome all those forces trying to divide us and put us into little boxes apart from each other. Because wouldn't it be great to kind of come together, instead of drift apart? I hope that's possible. Thank you," Clinton adds.

Netizens had a field day with Hillary Clinton's appearance on the show.

you wish it was all conspiracy theories.

The idiot pointed to his neck when he was referring to the adrenal gland! Get the man an anatomy book!

She should be drinking a Bloody Mary while disproving their lies. The visual 👀