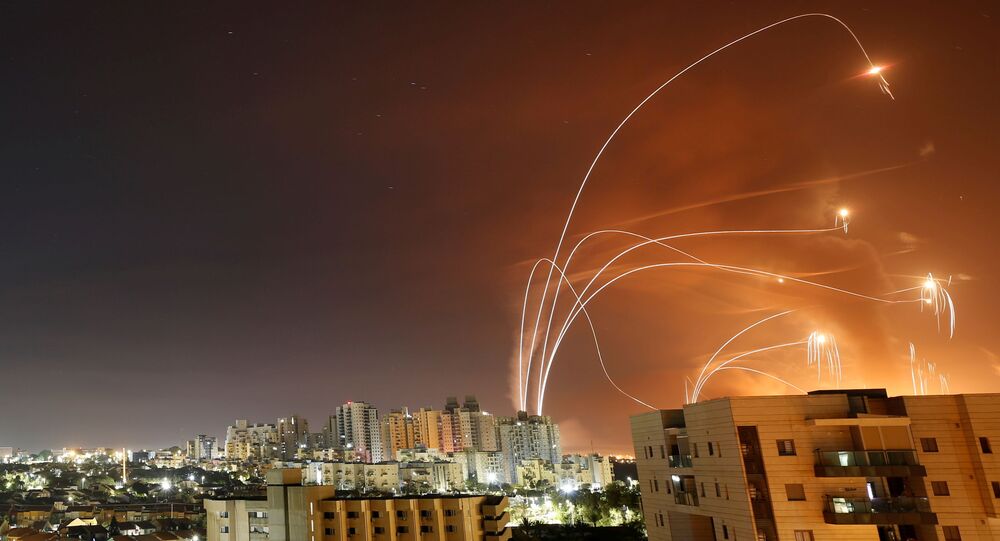 The administration of US President Joe Biden notified Congress that it approved selling Israel $735 million in weapons on 5 May, with the sale vetted by Washington coinciding with a fresh bout of hostilities on the Gaza-Israeli border. After 11 days of rocket attacks and airstrikes the sides agreed to a ceasefire on 20 May.

Four Republican Senators have called for federal funds designated by the administration of President Joe Biden for Gaza-based humanitarian aid to be redirected "to help Israel replenish its highly-effective missile defense interceptors."

"With Hamas and other Iranian-backed Palestinian terrorists continuing to launch indiscriminate rocket attacks against Israel, Americans have seen the images of Israel’s Iron Dome missile defence systems repeatedly intercepting rockets and saving the lives of countless civilians," said a statement from GOP Senators Marco Rubio of Florida, Bill Hagerty of Tennessee, Tom Cotton of Arkansas, and Ted Cruz of Texas.

The 11 days of hostilities involving rocket attacks and airstrikes that left 243 Palestinians and 13 Israelis dead in the region’s worst bout of violence in years have been brought to an end by an Egypt-brokered ceasefire, confirmed on Thursday night.

Data from both sides in the conflict cite 243 people killed in the Gaza Strip and 13 people in Israel.

According to the United Nations, over 77,000 Palestinians have been displaced by airstrikes that reduced hundreds of apartment buildings to rubble.

With Gaza’s water and power infrastructure damaged, the area faces the daunting task of recovery and rebuilding, with many countries pledging to fund the effort.

President Biden acknowledged on Thursday that the United States would be sending humanitarian aid to Gaza, but added the process would be coordinated with the Palestinian Authority “in a manner that does not permit Hamas to simply restock its military arsenal.”

Biden says the United States committed to help provide humanitarian assistance to Gaza "in a manner that does not permit Hamas to simply restock its military arsenal." pic.twitter.com/ojqSd8yIkM

The GOP senators’ move comes in the wake of a Democratic effort to block arms sales to Tel Aviv.

New York Democrat Rep. Alexandria Ocasio-Cortez earlier introduced a resolution to block a US-supplied weapons package to Israel that had been vetted by the Biden administration ahead of the outbreak of violence in the Middle East.

Congress was officially notified of the proposed sale on 5 May of $735 million in precision-guided weapons to Israel.

Forming the bulk of the deal were Joint Direct Attack Munitions, or JDAMS, which can transform so-called “dumb” bombs into precision-guided missiles and have been purchased by Israel in the past.

"For decades, the US has sold billions of dollars in weaponry to Israel without ever requiring them to respect basic Palestinian rights."

The US Representative for New York’s 14th congressional district added that the US has "directly contributed" to the death and displacement of "millions" of Palestinians.

© REUTERS / IBRAHEEM ABU MUSTAFA
Palestinians return to their houses which were destroyed by Israeli strikes in the recent cross-border violence between Palestinian militants and Israel, following Israel-Hamas truce, in Gaza May 21, 2021

The recent spate of violence in the Middle East has served to both deepen the partisan divide in Congress, and reportedly fuel a split within the Democratic Party.

While Israel maintains staunch defenders in the US Democratic Party leadership, the younger generation of lawmakers is reportedly showing growing skepticism about Israeli actions, including “unlawful evictions, violent attacks on protesters”.

U.S. aid should not be funding this violence. https://t.co/5ObpNIzMMg

After several days of brewing tensions between the Arab population and Israeli police over the forced eviction of Palestinian families in the Jerusalem neighbourhood of Sheikh Jarrah, and restricted access for Palestinians to Al-Aqsa Mosque compound on top of the Temple Mount - Islam's third most revered site - during the holy month of Ramadan, the conflict between Gaza-based Hamas militants and Israel escalated on 10 May.