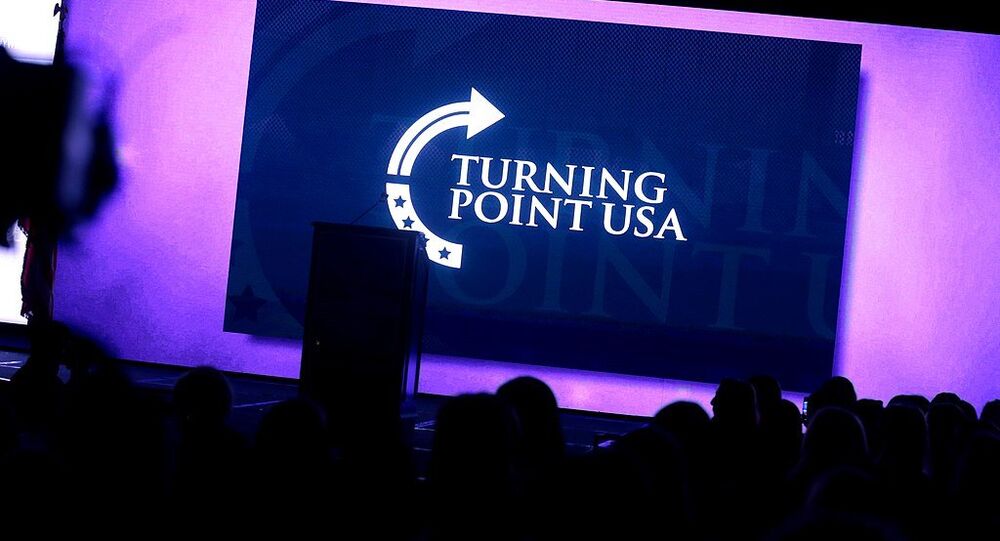 Some conservatives in the United States have recently expressed concern for how their voices could be digitally silenced, particularly pointing at "shadow-banning" on social media and "cancel culture" targeting those who voice opinions different from that of a mainstream.

The conservative group, Turning Point USA (TPUSA), in Whitney High School in Rocklin, California, has argued that the school moved to "digitally assassinate" all mentions of the group displayed during its "inclusion day".

According to the conservative activists, all logos and slogans from the political organization were photoshopped out of a group photo handed to all participants after the event wrapped up.

"Whitney High School digitally assassinated any mention of TPUSA from a so-called “inclusion event” group photo—editing out TPUSA logos & branding from students’ shirts", the group complained in a statement. "This is straight out of Orwell."

This is straight out of Orwell.

​TPUSA in its blog said that attempts to "silence" them were being made throughout the event, suggesting that "the Activities Director just wanted them hidden" and referring to how the group was asked to relocate and refrain from holding up and displaying what they claimed were "pre-approved" posters.

"Meanwhile, the Black Student Union across from us was permitted to have a basketball hoop and use a large speaker to play music, and nobody in the Administration said anything", the statement added. "Throughout the event there were two teachers, a vice principal, and a discipline tech standing near our table watching the booth closely. A member of administration [sic] ended up pulling the TPUSA chapter leader aside and told them that they needed to remove Turning Point USA stickers and pins, because leadership wanted nothing to do with Turning Point."

TPUSA claimed that the only materials they used that day were “I Heart America”, “Free the First”, and “Free Speech” slogans. The group also claimed that the slogans were edited out of the members' shirts in the group photo.

"This is YET ANOTHER completely UNACCEPTABLE BLATANT attempt to silence conservatives on campus", TPUSA stated, going on to add, "Orwellian instances like these, consistently happening across the country on a daily basis, are contributing to the demise of a free country and the beginning of a communistic one."

The Rocklin Unified School District released a statement addressing the claims, cited by CBS Sacramento, with a spokesperson for the district saying that the branding was removed from the photo for inclusivity.

“Following the conclusion of Whitney High School’s Inclusion Week that took place last week, the Associated Student Body (ASB) student leaders participated in a group photo to show school unity. Some students wore stickers that they received from a handful of school-sanctioned clubs. These stickers included symbols of the clubs and were removed from the group photo with the goal of honoring the group of ASB students without any other club affiliation in the spirit of equity, inclusivity and school unity,” according to Sundeep Dosanjh, a spokesperson for the district.

TPUSA members reportedly told the outlet that the photo represented the way they felt on campus.

“Students from my club don’t feel good on this campus whatsoever,” one student pictured on the group photo, Blake Whitney, told CBS Sacramento. “We feel like the school is trying to silence us.”

Complaints from TPUSA activists in California have emerged as conservatives in the United States voice concerns with "cancel culture" that, according to the political group, targets those who express unpopular opinions and attempts to "shadow-ban" or in other ways "silence" conservatives on social media.