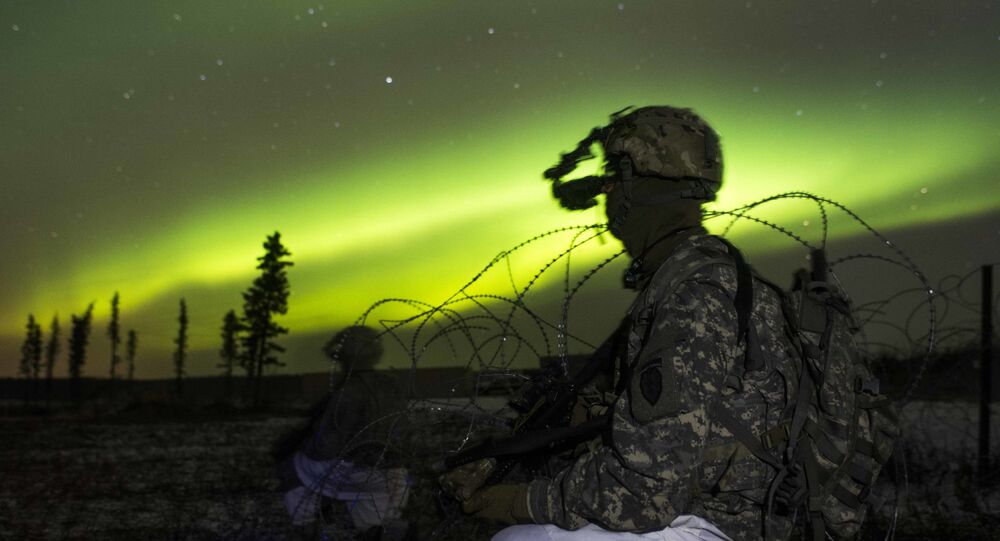 The US is stepping up its military presence in the Arctic region together with its NATO allies, while at the same time calling on other nations to restrain from Arctic militarisation. What's behind Washington's self-contradictory stance and the latest push in the ice-cold region?

The Biden administration is bringing the Arctic into focus as glaciers are melting, expanding the region's shipping lanes and increasing access to natural resources, Foreign Policy Magazine noted on 20 May, citing Antony Blinken's official visit to Greenland and Iceland as well as NATO's growing presence in the "high north".

The magazine outlines three elements of a new emerging pattern:

·         First, on 16 April, Washington struck the Supplementary Defence Cooperation Agreement with Norway, which will allow the US to build infrastructure at three air bases and a navy facility along the Norwegian coast.

·         Third, the Pentagon and its NATO allies are stepping up joint naval and air drills in the region: on 18 May, 10 countries kicked off Exercise Formidable Shield in the North Atlantic.

Foreign Policy admits that despite warning against a military buildup in the Arctic, Washington appears to be doing the opposite: "Hypocrisy? It depends on who you ask. Top Russian officials certainly think so. But some Western experts say no", the magazine writes, suggesting that the US is "simply bulking up deterrence and dusting off the Cold War-era cobwebs on militaries practicing operating in the North Atlantic".

Washington's vested interests in the Arctic region are obvious given that the latter accounts for 22 percent of the world's hydrocarbon resources, according to the United States Geological Survey. By 2040, the Arctic could have almost no summer sea ice, providing shorter shipping routes and bolstering trade opportunities.

The US' renewed pivot to the high north stems from the Donald Trump era and is well reflected in the Department of Defence's 2019 Arctic Strategy. In subsequent years, every major US military service branch came up with their own specific Arctic doctrines. The US Coast Guard published its Arctic Strategic Outlook in April 2019; the Air Force came up with its blueprint in July 2020; the Navy released its own Arctic strategy in January 2021, while the US Army unveiled its "Regaining Arctic Dominance" on 16 March 2021.

"The United States maintains strong defense relationships with six of the seven other Arctic nations. Four are NATO Allies: Canada, the Kingdom of Denmark (including Greenland), Iceland, and Norway; and two are NATO Enhanced Opportunities Partners: Finland and Sweden. They are highly capable, with immense experience in high latitude operational environments", the DoD doctrine says.

© AP Photo / Justin Connaher
In this Dec. 6, 2012 photo provided by the U.S. Department of Defense, soldiers assigned to 6th Engineer Battalion utilize snow shoes during Arctic Light Individual Training on the Bulldog Trail in sub-zero conditions at Joint Base Elmendorf-Richardson, Alaska. ALIT is the United States Army Alaska's Cold Weather Indoctrination program. It gives all soldiers, regardless of their job, the foundation to successfully work, train, and go to war in some of the harshest environments in the world.

At the same time, the document regards Russia as NATO's biggest "competitor" and, apparently, a hurdle to US-NATO ambitions in the region. The country accounts for 53% of the Arctic Ocean coastline and has the largest Arctic population with roughly two million people – around half of the people living in the high north worldwide.

In addition to this, Russia maintains control over the Northern Sea Route (NSR), the shortest maritime route from Europe to Asia, which almost entirely goes through Russia’s territorial waters or the country’s exclusive economic zone (EEZ). Russian law stipulates that the NSR is a "historically developed national transport corridor", while the US is trying to challenge this stance by claiming that the route is "an international strait and it is open for transit passage", as Commandant of the US Coast Guard Admiral P. Zukunft outlined in his statement in spring 2018.

The Pentagon's Arctic doctrine specifically targets the NSR arguing that Russia's position lacks legal basis and threatens to "challenge excessive maritime claims" in the region and "deter strategic competitors from specific, aggressive acts and from unilaterally seeking to change norms governing access to the region".

It further claims that Russia poses an "effective offensive threat" to the US in the high north, adding that its "modernized subsurface and surface naval presence" will have "a strategic effect on US homeland defence".

Russia is not the Pentagon's only headache in the high north: China is also increasing its operations in the region. Beijing is planning to use the NSR as a "Polar Silk Road" – part of its ambitious global Belt and Road Initiative (BRI) – and is developing joint energy exploration projects with Russia in the Arctic.

"The Arctic has the potential to become a contested space where United States’ great power rivals, Russia and China, seek to use military and economic power to gain and maintain access to the region at the expense of US interests", the US Army's 2021 blueprint reads.

In order to "regain Arctic dominance", the US Army is seeking to "employ calibrated force posture and multi-domain formations to defend the homeland and pose dilemmas for great power competitors" in close cooperation with its network of NATO allies, which it sees as a huge strategic advantage in the region.

Royal Danish Air Force
A B-1B Lancer flies with a Danish F-16 during a training mission for Bomber Task Force Europe, May 5, 2020.

US Military Buildup in the Arctic

The Pentagon walks the talk: it has beefed up its military presence in Alaska, increased the number of ground troops, and stationed more fifth-generation fighter planes there "than exist in any other location on the planet", according to War on the Rocks. The US Navy has reactivated the Second Fleet, which achieved full operational capabilities on 31 December 2019 in a bid to return to the great power competition in the Northern Atlantic.

In March 2021, the US Air Force dispatched four B-1 and B-2 strategic bombers from a base in Norway to conduct a mission over the Arctic Circle. According to Forbes, it was "a clear demonstration of strength for two audiences: America’s NATO allies and Russia".

In addition to deploying nuclear-powered submarines in Norwegian ports and stepping up joint NATO military drills, as mentioned above by Foreign Policy, Washington is encouraging its allies and partners to project further power in the high north.

On 17 May, US Secretary of State Blinken endorsed Denmark's plans to boost its military presence in Greenland and the North Atlantic. In February, Denmark allocated 1.5 billion Danish kroner ($245 million) in military investment for surveillance drones in Greenland and a radar station on the Faroe Islands.

Ahead of the 12th Arctic Council Ministerial Meeting in Reykjavik, Secretary of State Blinken reiterated Washington's claims that Russia, which assumed the rotating chairmanship of the body this year, "advance[s] unlawful maritime claims, particularly its regulation of foreign vessels transiting the Northern Sea route".

Moscow resolutely dismissed the US criticism and in response questioned NATO's motives in deploying strategic bombers and nuclear-powered submarines to the area.

"It has been absolutely clear for everyone for a long time that this is our territory, this is our land", Russian Foreign Minister Sergei Lavrov said at a press conference in Moscow earlier this week, referring to Russia's Arctic coast and related EEZ. "When NATO tries to justify its advance into the Arctic, this is probably a slightly different situation and here we have questions for our neighbours like Norway, who are trying to justify the need for NATO to come into the Arctic".

During the Reykjavik summit, which took place on 20 May, Lavrov noted that "Russia, as the largest Arctic power, believes that its priority at the Arctic Council is to promote the region’s balanced and sustainable social, economic and environmental development", stressing that "the Arctic is a territory of peace, stability and constructive cooperation".