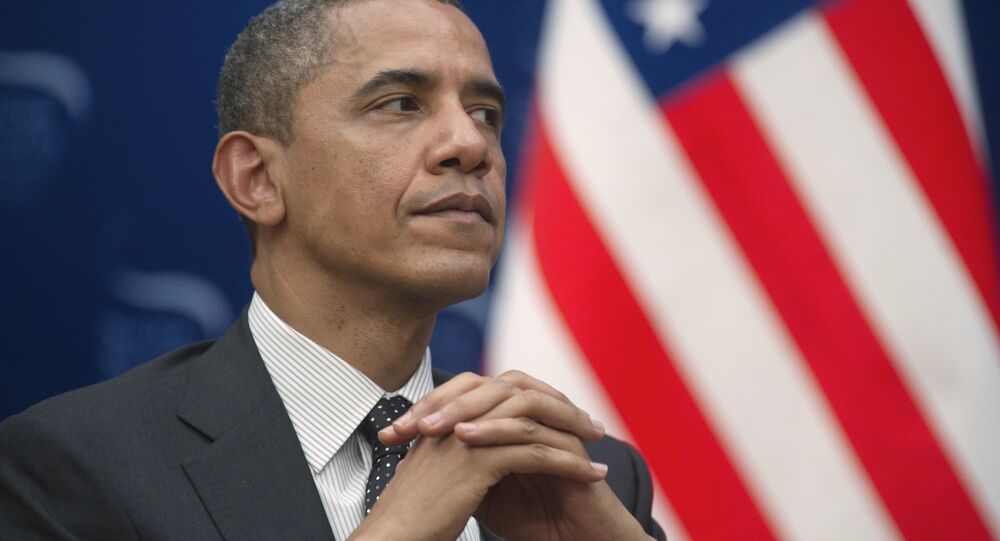 Obama Was a ‘Parasite’ Who Oversaw 'Pilfering of Talent, Resources’ From Dems, Claims New Book

“Battle for the Soul: Inside the Democrats’ Campaigns to Defeat Donald Trump” is a new book by political journalist for The Atlantic Edward-Isaac Dovere, which will be published on 25 May, that touts itself as offering a “fly-on-the-wall” account of how America’s Democratic party journeyed to successfully retake the White House.

A new scathing portrait of former US President Barack Obama claims that the politician’s seemingly aloof deportment and "professorial detachment" masked a "parasite".

The Democratic Ex-POTUS is accused of "negligence" with his own party in a new book set to be published on 25 May and cited by the Daily Mail.

Obama, whose White House tenure lasted from 2009 to 2017, is denounced as having “sucked his party dry” for his reelection, leaving it debt-riddled, in “Battle for the Soul: Inside the Democrats' Campaigns to Defeat Trump”.

One month until publication on May 25, but @PoliticsProse is ready for Battle for the Soul - pre-order there (or if you’re not in DC, pre-order here: https://t.co/HLbZLqRegM) pic.twitter.com/mTMQETWZ1g

The first African-American president of the United States is slammed by the author - Edward-Isaac Dovere - for having allegedly exploited the US Democratic Party structure as a "host" for his 2012 campaign, when he sought re-election.

In stark contrast to the outward appearance that Obama reportedly sought to cultivate, in reality he was full of "self-assured self-regard", insists the award-winning political journalist for The Atlantic, who has ostensibly based his book on on-the-ground reporting complemented by in-depth conversations with the key players within the party, as well as aides, advisers, and voters.

"Battle for the Soul" professes to offer a detailed account of the 2020 Democratic Presidential race, which resulted in Joe Biden triumphing over his Republican rival, Donald Trump. However, the book’s passages on Obama are among the sharpest, states the outlet.

'Pilfering of Money and Purpose'

“Obama never built a Democratic bench and never cared to, aside from a few scattered candidates who interested him. Defenders like to argue that Obama's approach to governing was a reflection of his unwillingness to taint his presidency by mucking about in fundraising”, Dovere writes, adding:

“They admit now those were excuses”.

The author emphasises that Obama's excessive pride reached its climax in 2015, when the Supreme Court upheld his signature healthcare law – Obamacare – while also ruling that the 14th Amendment requires all states to grant same-sex marriages.

Obama stated at the time: "This ruling will strengthen all of our communities, by offering to all loving same-sex couples the dignity of marriage, across this great land".

The ruling triggered celebrations outside the court in Washington, DC, wrapping up over a decade of legal battles.

“In hindsight it's hard not to see delusion in the self-assurance and the celebration and the sense of moving forward of those two weeks in America. That period, Obama's 2008 campaign manager, David Plouffe, said then, was an 'exclamation point on already historic and satisfying paragraphs'”, writes the former chief Washington correspondent for Politico.

In a reference to the era of former President Donald Trump (2017 to 2021), the author of the book writes that while Obama has been the object of "beatification among Democrats", he inadvertently helped usher in what followed him.

Barack Obama ostensibly oversaw the "pilfering of talent, money, resources, and purpose" away from the Democratic National Committee to his own re-election team in 2012, leaving the DNC $2.4m in debt.

Summing up the eight years under Obama, the book points out that the Democrats suffered a net loss of 947 state legislative seats, 63 House seats, 11 senators, and 13 governors.

Nevertheless, at no point did Obama accept any part of the blame for the "deterioration of the DNC infrastructure", states the author, as he "raised more money than anyone in its history".

While Obama's aides have made mention of his "benign neglect" with regard to the Democratic Party, the truth, claims the book, is more like "negligence".

“Obama used the party structure as a host for his campaign. In his second term, he cared about what happened to the husk as much as any parasite does”, writes Dovere.

Barack Obama was so arrogant that he firmly believed he could have beaten Donald Trump if he could have run for a third term in 2016.

“Ultimately Obama's math comes down to a simple calculation: he has suggested in conversations with people close to him that he thinks he would have won had he been able to be a candidate in 2016”, writes Dovere.

In extracts from the book previously made public, according to Dovere, Obama branded Trump a "madman", a "racist, sexist pig", and a "corrupt motherf***er".

In one area – social media – Obama was ostensibly excessively proud to have outperformed Trump.
In the summer of 2017, Obama was reportedly "bragging on the golf course" about his "best-liked Tweet of all time".

In the wake of the Charlottesville attack, perpetrated on 12 August 2017, Obama posted a series of tweets quoting former South African President Nelson Mandela. “No one is born hating another person because of the color of his skin or his background or his religion”, the first tweet read.

"No one is born hating another person because of the color of his skin or his background or his religion..." pic.twitter.com/InZ58zkoAm

The initial tweet, accompanied by a photo of the former president smiling at four children in a window, was confirmed to TIME by Twitter to have been the most liked tweet in the company’s history and it’s the fifth most retweeted tweet ever.

Obama claimed it was his idea to send the Tweet, and that he chose the quote and photo.

“He loved that he had outperformed any of Trump's tweets, outperformed every other tweet, while worrying that this was the world he had now chosen to inhabit too”, writes the author.

As for the prospect of Joe Biden, who was Obama’s vice president for eight years, running for the presidency in the 2016 election, the ex-POTUS was reportedly dubious.

While originally believing that Biden was simply "working out his grief at his son's death by entertaining the fantasy of running for president", in autumn of 2015 Obama is cited as having instructed aides to "go and meet with Biden to jolt some sense into him, to stop him from getting himself hurt and embarrassing Obama as he did so".

© AFP 2021 / MANDEL NGAN
US President Barack Obama speaks on the Keystone XL pipeline, flanked by Secretary of State John Kerry (R), and Vice President Joe Biden, on November 6, 2015 in the Roosevelt Room of the White House in Washington, DC.

After Biden decided to run in the 2020 election, Obama felt increasingly "nervous", claims the book.
In "Battle for the Soul", the author reveals that Obama was apprehensive Biden’s advisers might have "pushed him to run".

“I'm rusty… God knows how rusty Joe is”, he was reported as having said.