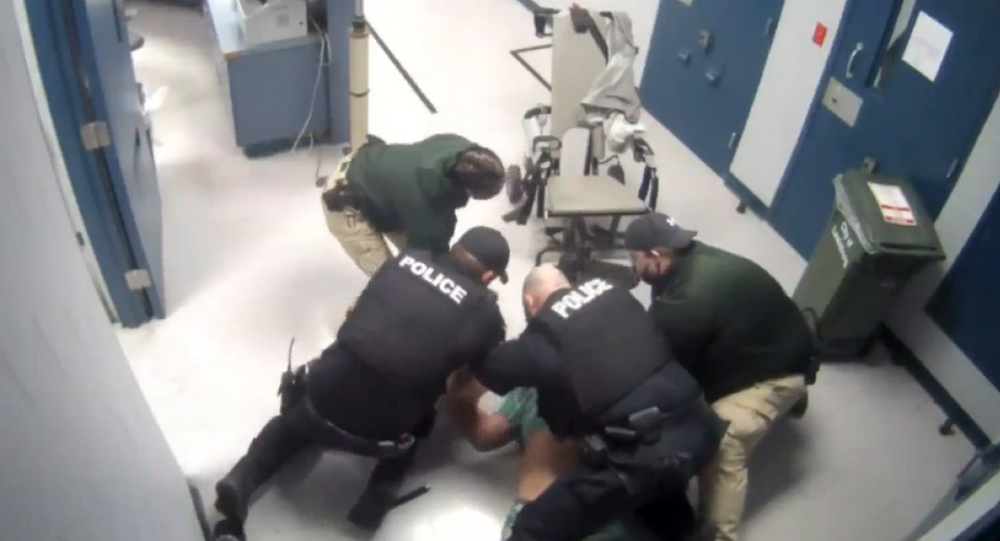 After a black Minneapolis resident, George Floyd, was killed in May 2020 by a now-convicted white police officer, Derek Chauvin, who kneeled on the former's neck for almost 10 minutes, massive protests were triggered across the United States against police brutality and police racism.

A white inmate jailed for public intoxication and indecent exposure, William Jennette, died last May after being pinned to the ground by several police officers in a Tennessee jail, with the death ruled as a homicide according to an autopsy, cited by WTVF.

Video of the incident obtained by the media outlet shows seven cops simultaneously pressing Jennette to the ground, as he begs for help, but receives taunts in response.

“Help, they’re going to kill me! Let me up or I’m gonna die,” Jennette said in the footage, recorded by a prison guard's bodycam. One of the guards yelled, “You shouldn’t be able to breathe, you stupid b****.”

The officers started pressing him down after he refused to be put in a restraint chair, because he was still “hallucinating” and hitting his head on the wall while “detoxing” from drugs.

According to the report, Jennette died five minutes after officers bent his legs to his back while continuing to stay on his back, although one guard says to "remember asphyxiation". Before he died, Jennette was reportedly unconscious for over a minute.

Instead of checking on Jennette, however, one of the guards asked another if she was okay and mocked the inmate's "I can't breathe!" plea, prompting laughter from her colleague. Only later the officers noticed that Jennette was not breathing and began CPR.

The incident triggered a bitter reaction from Jennette's daughter, Dominique Jennette, who is now suing the guards and the jail in federal court, asserting, according to WTVF, that the officers should have been "more aware" and "should have been trained properly and they weren’t.”

“That’s just something that really sticks with me, of how scared he must have been and how alone he must have felt,” Dominique Jennette told WTVF.

According to the coroner's examination, asphyxiation contributed to Jennette's death, along with "acute combined drug intoxication".

Jennette's daughter argued that because the coroner's report showed that the death was ruled a homicide, along with bodycam video footage, the evidence proves that her father was murdered.

The timeline of the case falls in line with another incident involving a black man, George Floyd, who was killed in police custody after a white police officer, Derek Chauvin, kneeled on the latter's neck on the ground for for 9 minutes and 29 seconds. The video of the killing surfaced online, immediately causing a national uproar and triggering a massive wave of anti-police brutality and anti-police racism protests in every major city in the United States and in many locations around the world.

Some protests evolved into violence, and activists have pushed for police departments to either be dismantled or thoroughly reformed, particularly when it comes to use of restraints.