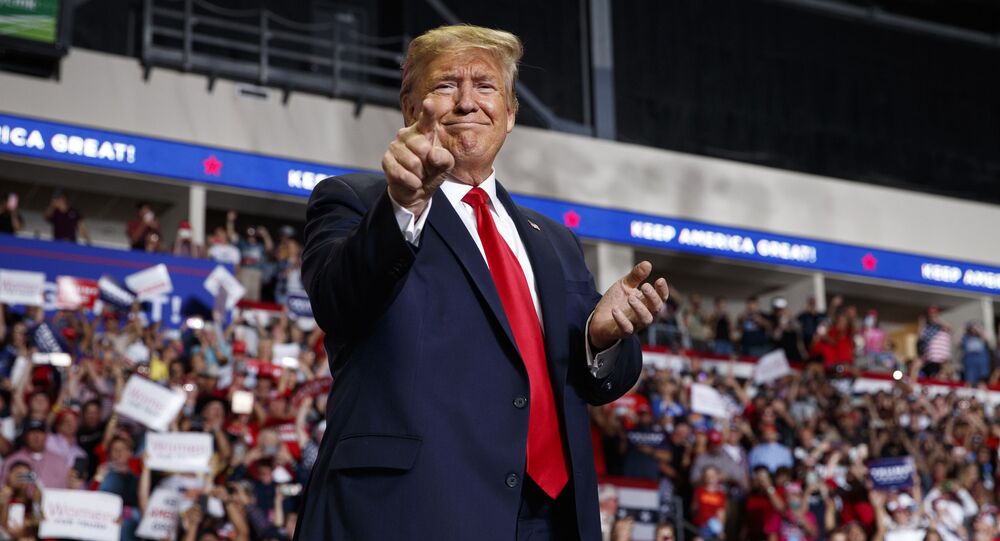 City officials in Albuquerque, New Mexico, made the decision in late April to refer a $200,000-plus unpaid bill owed by the reelection campaign of former US President Donald Trump to a professional collection agency. The outstanding invoice has remained unfulfilled since the campaign held a rally in 2019.

Albuquerque Mayor Tim Keller has revealed that the city officially installed a new joke sign that welcomes visitors, as well as highlighting the fact that the former commander-in-chief has yet to make good on an overdue bill he incurred while on the campaign trail.

Keller unveiled the new addition to the city’s various street signs on Wednesday, sharing an image of it on Twitter and noting that it was gifted by Comedy Central’s Emmy-winning program “The Daily Show” and comedian Jordan Klepper.

Although the sign states, “We do not accept checks from Donald J. Trump,” Keller took the opportunity on social media to clarify that the city is in fact willing to accept a valid check from Trump “for services rendered.”

Klepper later responded to the unveiling by jokingly warning that the continued failure to pay the invoice may prompt some individuals to “throw a pizza on [Trump’s] roof.” The pizza reference touches on the ever-popular scene from the TV drama “Breaking Bad” that centers around an Albuquerque family.

The Albuquerque mayor received the sign after participating in a late April interview with Klepper that saw the city official spill the beans and confirm that Trump’s reelection campaign never paid off its $211,175.94 debt.

“Trump came for a rally and we decided to bill him, because the cost to the city were tremendous,” Keller had explained to Klepper. “They made us shut down downtown. We had to close city hall.”

At the time, Keller revealed that the city also chose to tap the services of a collection agency after its efforts to clear the invoice were unsuccessful. “I think Mar-a-Lago is now getting those [collection] calls,” the mayor said.

While the city of Albuquerque may still be holding out on the payment, it’s more than likely that the bill will remain outstanding as Trump is no stranger to owing large sums, especially when it comes to his employees or contractors.

A June 2016 exclusive report by USA Today found that Trump failed to pay hundreds of workers, including waiters, painters, lawyers, dishwashers and cabinet-builders, for services rendered. Many of the cases were taken to the courts, where some disputes were closed with settlements.