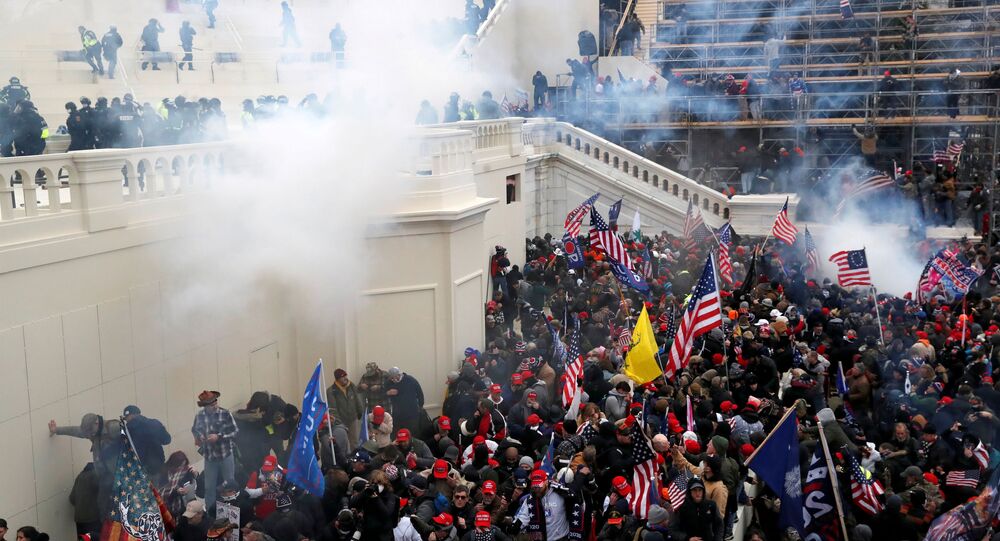 On 20 May, former President Donald Trump lashed out at the 35 House Republicans who voted with their Democratic counterparts to create an independent commission to investigate the 6 January Capitol riots. Still, 175 GOP lawmakers opposed the initiative. What's behind their unwillingness to launch the new panel?

"See, 35 wayward Republicans – they just can't help themselves", Donald Trump ranted in a 20 May statement. "We have much better policy and are much better for the country, but the Democrats stick together, the Republicans don't".

Earlier, on Tuesday, the ex-president called upon GOP lawmakers "not [to] approve the Democrat trap of the January 6 Commission", and even bring an end to this debate "unless the murders, riots, and fire bombings in Portland, Minneapolis, Seattle, Chicago, and New York are also going to be studied".

If passed by both chambers of the US Congress the bill would give the commission subpoena power to call witnesses. The 6 January panel is modelled on the 9/11 Commission that examined the circumstances surrounding the 11 September 2001 terror attacks.

Breaking: House passes 1/6 commission by vote of 252-175, with 35 Republicans joining Democrats in supporting the bipartisan plan.

​The House GOP leadership, including Kevin McCarthy, opposed the legislation arguing that a series of congressional and intergovernmental investigations into the riots are already underway. He suggested that the Democratic Party's initiative is far from being unbiased and "could interfere with and ultimately undermine… ongoing prosecutorial efforts".

For their part, Rep. David Joyce (R-Ohio) and Rep. Jeff Fortenberry (R-Neb.) who voted in favour of creating the 6 January panel stressed that they are looking for facts and that the American people deserve to know what happened and how the nation can fix these failures.

GOP Rep. David Joyce on his vote for the commission: "the American people... deserve to know what happened and how we can fix the failures that occurred. This is about facts, not partisan politics.” pic.twitter.com/WmLVTPZRfo

​Yet another commission proponent, Rep. Liz Cheney (R-WY), suggested that Kevin McCarthy himself should be questioned by the 6 January panel.

"I wouldn't be surprised if he were subpoenaed", Cheney told ABC News on 16 May. "I think he very clearly and said publicly that he's got information about the president's state of mind that day".

On 12 May, Cheney was ousted from the House Republican leadership over harsh criticism towards Donald Trump as well as voting to impeach the former president. Leader McCarthy supported her removal.

© AP Photo / Melina Mara
Rep. Liz Cheney, R-Wyo., arrives to the chamber ahead of President Joe Biden speaking to a joint session of Congress, Wednesday, April 28, 2021, in the House Chamber at the U.S. Capitol in Washington.

Commenting on the split within the GOP's ranks, CNN called it a "revolt" against the Republican House leadership and Donald Trump's "personal cult". The media admitted, however, that 35 Republican votes represent "a small fraction of the overall GOP caucus", with a total of 175 Republicans voting against the 6 January commission.

Senate Republicans can show everyone if they want to pursue the truth about January 6th or just want to cover up for Donald Trump and insurrectionists.

I will bring the House-passed legislation for the January 6th Commission to the Senate floor for a vote.

​The US Senate is due to vote on the House-passed bill next week. Democratic senators need at least 10 GOP votes to pass the legislation in the evenly split upper chamber. However, given Senate Minority Leader Mitch McConnell's opposition to the initiative it appears it won't be an easy task. McConnell has already signalled that he considers the House's proposal "slanted and unbalanced".

Echoing McCarthy, the Senate Republican leader argued that the ongoing investigations are sufficient to probe the Capitol riots. In January 2021, McConnell subjected protesters as well as then-President Donald Trump to tough criticism. Still, currently he deems that the 6 January commission would be duplicative to law enforcement and congressional efforts. To date, the Department of Justice has announced 445 arrests in conjunction with the Capitol protests, while 100 more arrests are expected to follow.

GOP Argues The Protests Were Not 'An Insurrection'

While President Joe Biden called the 6 January DC riots the "worst attack on [American] democracy since the Civil War", conservative observers suggest the violence at the protests has been deliberately exaggerated by the Democrats.

Julie Kelly, a political commentator and senior contributor to American Greatness, argues in an op-ed for The Epoch Times that the media-pedaled description of the DC event as an "armed insurrection" is an overstatement. Having examined federal indictments against 400 people currently charged by the Justice Department, she highlighted that only 44 defendants "stand accused of either possessing or using a dangerous weapon". According to her, only two protesters were found to be in possession of a firearm, but neither was inside the building on 6 January.

On 16 May, American Greatness released a video of the protests showing Capitol Police officers speaking with several protesters, including Jacob Chansley, also known as the QAnon Shaman, inside the building on 6 January. One officer, identified by the media outlet as Officer Keith Robishaw, appears to tell Chansley's group that the police won't stop them from entering the building. "We're not against . . . you need to show us . . . no attacking, no assault, remain calm", Robishaw ostensibly said. After that Chansley instructed his group that "this has to be peaceful".

"The video directly contradicts what government prosecutors allege in a complaint filed January 8 against Chansley", the media outlet suggests.

​The media narrative calling the Capitol breach "an insurrection" is "false", according to Sen. Ron Johnson (R-Wis.). "By and large, it was a peaceful protest, except for there were a number of people, basically agitators that whipped the crowd and breached the Capitol", he told Fox News on Wednesday, adding that he strongly condemned the breach and the violence.

Ron Johnson claims it wasn’t an insurrection and goes on to say by and large it was a peaceful protest pic.twitter.com/E9TVzhNPTS

​Conservative observers further argue that the 6 January commission will deepen partisan rift and may be used by the Democrats as a tool against their political opponents. Speaking on Fox News "Tucker Carlson Tonight" on 20 May, The Federalist co-founder Sean Davis said the proposed panel resembles nothing more than Special Counsel Robert Mueller's probe 2.0.

Davis presumed that the Democratic-initiated commission would use its powers to target the party's political enemies as well as to boost the Dems election odds in the upcoming 2022 midterms.

A man with no allegiance to the constitution, rule of law, or our Democracy.

The events of January 6 will be investigated.

No matter the opposition — we will have truth and accountability.

​For their part, Democrats insist that the GOP is trying to downplay the 6 January events and call upon Senate Republicans to approve the creation of the commission to get to the bottom of what happened that day.

The protests erupted over suspected 2020 election irregularities as the joint session of the US Congress was preparing to certify Electoral College votes. During the riots, one protester, US Air Force veteran Ashli Babbitt was shot dead by a law enforcement agent, three passed away from natural causes. Capitol Police officer Brian Sicknick suffered a deadly stroke a day after the breach. Two police officers, Howie Liebengood and Jeffrey Smith, reportedly committed suicide days after they responded to the Capitol protests. Another 140 police officers were injured during the riots which temporarily halted the congressional session.