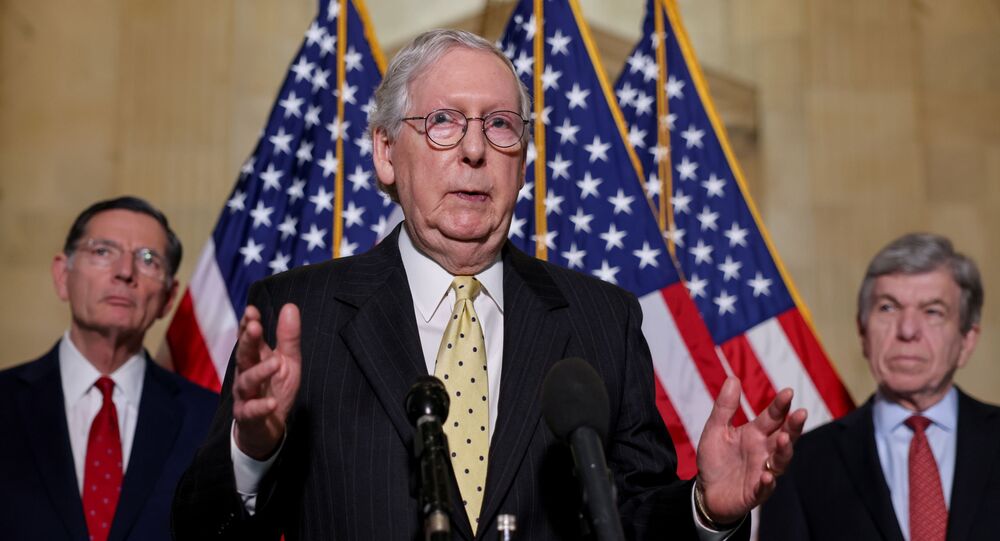 The US House of Representatives is slated to vote on legislation that calls for the formation of a commission to investigate the deadly January 6 riot on Capitol Hill. Though the bill has received bipartisan support, some Republicans have questioned the commission's independence. If passed by the House, the measure will advance to the US Senate.

Speaking to fellow lawmakers from the Senate floor on Wednesday, Senate Minority Leader Mitch McConnell formally announced opposition to the formation of a Capitol riot commission.

"After careful consideration. I’ve made the decision to oppose the House Democrats' slanted and unbalanced proposal for another commission to study the events of January the 6th," McConnell said.

The Senate Minority Leader went on to emphasize that law enforcement agencies have made "at least 445 arrests" and hundreds have been charged for their alleged roles in the Capitol riot.

"Bipartisan investigations are also underway, and have been for months," he said, noting that several congressional committees are probing the topic. "It's not at all clear what new facts, or additional investigation yet another commission could actually lay on top of existing efforts by law enforcement and Congress."

The Senate Minority Leader's comments come hours after former US President Donald Trump issued a blog post calling on Republicans in Congress to oppose the "Democrat trap of the January 6 Commission."

"It is just more partisan unfairness and unless the murders, riots, and fire bombings in Portland, Minneapolis, Seattle, Chicago, and New York are also going to be studied, this discussion should be ended immediately," Trump wrote. "Republicans must get much tougher and much smarter, and stop being used by the Radical Left. Hopefully, Mitch McConnell and Kevin McCarthy are listening!"

Even before Trump's Monday night post, House Minority Leader Kevin McCarthy came out in opposition of the commission, decrying the move as politically misguided and "potentially counterproductive."

At the same time, Republican lawmakers, like Sen. Susan Collins (R-ME) have expressed support for a nonpartisan commission.

"I think it would be valuable in terms of establishing exactly what happened, and for lessons learned," Collins said on Wednesday.

She also argued that House Speaker Nancy Pelosi (D-CA) was to blame for the bill's partisan nature.

The proposed commission would be tasked with investigating the events that led up to the storming of the US Capitol building in Washington, DC, on January 6. Although Donald Trump has not been charged in association with the riot and called on those participating in the Capitol building storming to "go home now," politicians from both sides of the aisle have tied the incident to the former US president's "Save America" rally that occurred the same day.

The January 6 event resulted in the deaths of five individuals and damages totaling more than $30 million, according to Capitol architect J. Brett Blanton. Federal Bureau of Investigation (FBI) Director Christopher Wray has characterized the riot as an act of domestic terrorism.