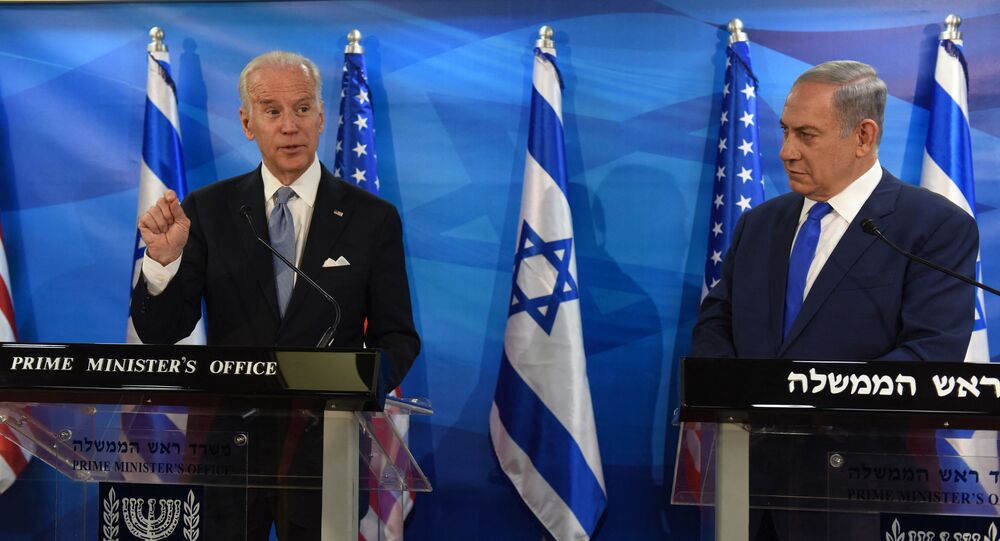 As tensions between Tel Aviv and Hamas have intensified during the month, seeing rocket exchanges between Israel and Gaza, US President Joe Biden has voiced his support for a ceasefire and met criticism from some Democratic lawmakers who have urged him to take a tougher stance on the conflict.

US President Joe Biden, in a private Monday call with Israeli Prime Minister Benjamin Netanyahu, was tougher than he expressed publicly, warning the latter that "he could put off growing pressure from the international community and from Congress to call on Israel to change its approach to Hamas for only so long", The New York Times reported on Tuesday, citing two unnamed people claiming to be familiar with the call.

Biden has reportedly hinted that there is a time limit for his ability to diplomatically cover the actions of the Israeli government amid heated tensions between Tel Aviv and Hamas.

According to the report, a new dynamic has emerged in American politics in the wake of the conflict, as the president is picturing himself as a closer friend to Israel than the latter might find in Congress.

Biden's approach was defended by White House Press Secretary Jen Psaki, who told reporters that the 46th president "has been doing this long enough to know that the best way to end an international conflict is typically not to debate it in public".

“Sometimes diplomacy needs to happen behind the scenes, it needs to be quiet and we don’t read out every component", Psaki observed.

Not everyone shares the sentiment, however, with some of Biden's fellow Democrats voicing opposition to his stance on the Israeli-Palestinian conflict. Among them, in particular, is Representative Alexandria Ocasio-Cortez, who earlier in the month criticised the president's approach.

"By only stepping in to name Hamas’ actions - which are condemnable - & refusing to acknowledge the rights of Palestinians, Biden reinforces the false idea that Palestinians instigated this cycle of violence. This is not neutral language. It takes a side - the side of occupation", Ocazio-Cortez asserted.

On Monday, Biden and Netanyahu discussed Israel's "right to defend itself" amid the escalation of tensions between Israel and the Palestinians. Since the beginning of Ramadan, unrest has been boiling in the city of Jerusalem due to Tel Aviv imposing coronavirus restrictions at holy sites.

In May, a decision by the Israeli court to evict Palestinian families from the neigbourhood of Sheikh Jarrah, prompted violence to erupt on the border of Gaza Strip, with some 3,700 rockets fired from the territory towards Israel. Over 1,200 were intercepted by Israeli missile defense and some 540 landed in Gaza.