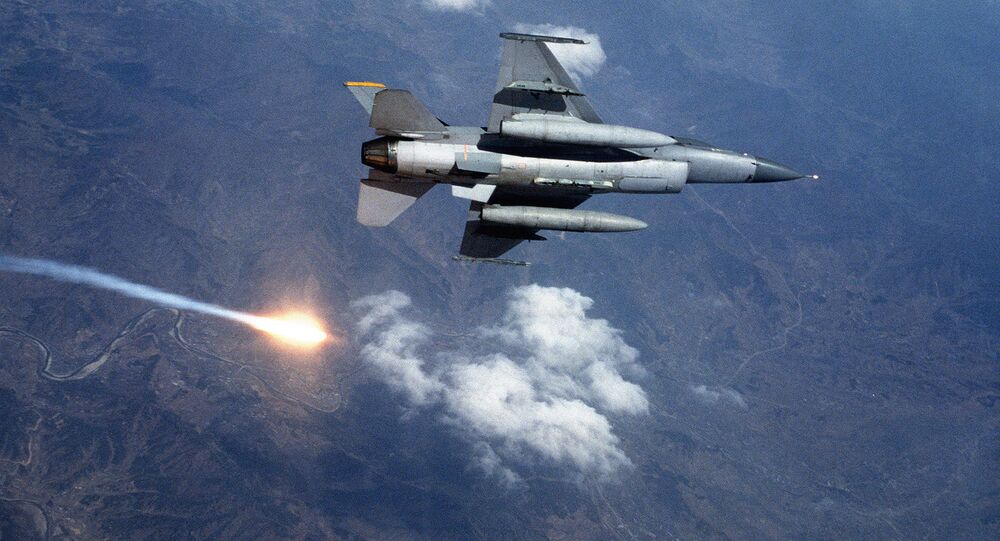 A civilian plane that violated temporary flight restrictions during the president's trip to Delaware was redirected to New Garden Airport in Pennsylvania.

A US warplane fired a warning shot at a civilian aircraft that flew over Wilmington, Delaware as President Joe Biden was visiting the city in his home state, 6abc News cited the country's Secret Service as saying a statement.

"A small aircraft violated the restricted airspace in Wilmington, DE. Per standard protocol, US military aircraft responded, the aircraft was intercepted, and the pilot redirected to a local airport" in Pennsylvania's New Garden Township, the statement reportedly pointed out, arguing that the incident ostensibly took place on 16 May.

A screenshot allegedly depicting the incident and shared on social media, showed flares being fired by what looked like an F-16 fighter jet in the direction of a civilian plane that was reportedly identified as a US-made Grumman AA-5 Tiger.

New Garden Airport in Chester County is just inside the NO fly ring, when President Biden goes home to Wilmington. Meaning sales and flight operations at the local airport are down. 85 percent of its business happens on weekends. @6abc https://t.co/TPdTpI4oC7 pic.twitter.com/Gr9oxhCMQt

6abc News cited Jonathan Martin, the aviation director of New Garden Township as saying the pilot of the Grumman AA-5 Tiger was flying back from Ocean City, Maryland, and was unaware of the temporary flight restriction (TFR).

This was filmed off my deck in new london township. Loudest thing I’ve ever heard. pic.twitter.com/33xEaAXlT8

"This was the first time that an aircraft was forced onto the ground during a presidential TFR", Martin, who also serves as manager at the Flying Field at New Garden Airport, claimed.

He noted that his airport is located inside the no-fly zone and at least six aviation intercepts occur each time the POTUS comes home to Wilmington on the weekends, when 85% of the airport's business happens.

"It's very trying on us as an airport. We have 130 base tenants on the field. We are completely grounded during these TFRs", Martin said.

© REUTERS / POOL
US Media Warns of Security Risk as Biden’s Private Venmo Account Found in 'Less Than 10 Minutes'
He pointed out that "it's very hard to be optimistic", especially given the Secret Service not having reacted to the airport reaching out to them in an attempt to resolve the problem by including changes in flight routes in and out of the field, among other things.

"We hope we can come up with a solution to keep us operational and keep the New Garden Airport flourishing", Martin concluded.