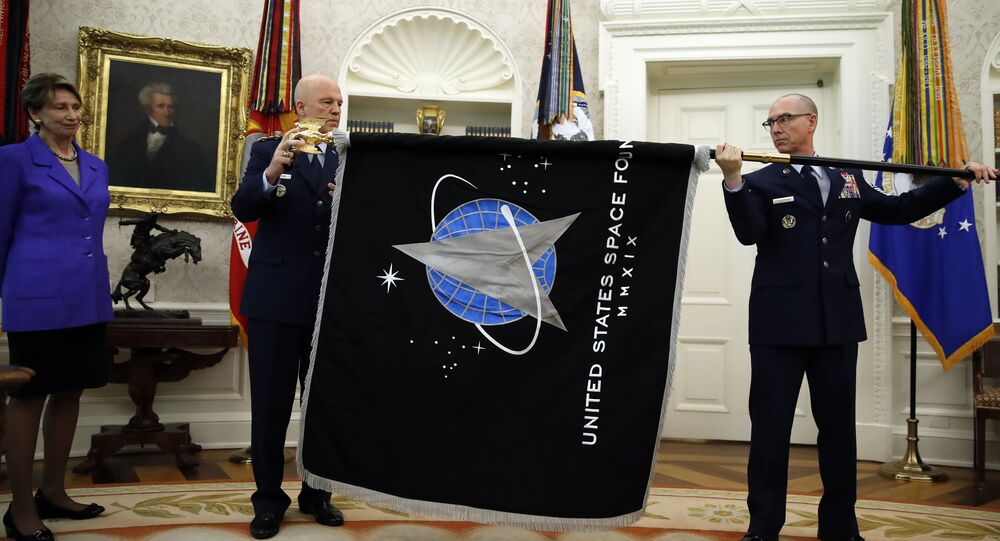 'It's Not Politically Partisan to Attack Marxism', Ousted US Space Force Officer Says

Last Friday, the website Military.com reported that Lt. Col. Matthew Lohmeier, commander of the 11th Space Warning Squadron at Buckley Air Force Base, Colorado, had been ousted from his post "over a loss of confidence in his ability to lead".

A US Space Force lieutenant colonel, who was recently relieved of his command, has claimed he is being "misportrayed" online over his Marxism-related comments.

Lt. Col. Matthew Lohmeier, commander of the 11th Space Warning Squadron at Buckley Air Force Base, Colorado lost his post late last week following his appearance on a podcast in which he advised members not to comply with diversity training because it is based on critical race theory, "which is rooted in Marxism".

While Lohmeier hasn't been discharged from the service, it's unclear what his present assignment is. He had previously been in charge of a unit tasked with detecting ballistic missile launches.

© AP Photo / Staff Sgt. Kayla White
In this photo released by the U.S. Air Force, Capt. Ryan Vickers stands for a photo to display his new service tapes after taking his oath of office to transfer from the U.S. Air Force to the U.S. Space Force at Al-Udeid Air Base, Qatar, Tuesday, Sept. 1, 2020.

In an interview with Fox News on Monday, Lohmeier said he doesn't believe he "was being partisan" and that "it is not politically partisan to expose or attack critical race theory or Marxism".

"The reason I say that is because Critical Race Theory and Marxism are antithetical to American values. Critical race theory fuels narratives that attack America's founding documents. I'm being misportrayed online – I don't criticise any leader, or any person in the DoD [Department of Defence] or any elected officials – but I try to tee up ideas that I think are toxic", the lieutenant colonel argued.

Critical race theory is an academic movement that emerged in the 1990s that sought to re-emphasise the continuation of racism and racial disparities in US culture and institutions in a direct challenge to the notion of a post-racial society that became popular after the civil rights upheavals of the 1960s and 70s.

During the podcast, he said that "our diversity, inclusion and equity industry and the trainings we're receiving in the military via that industry are rooted in critical race theory which is rooted in Marxism".

Lohmeier also lashed out at US Secretary of Defence Lloyd Austin, saying, "I don't demonise the man, but I want to make it clear to both him and every service member this [diversity and inclusion] agenda, it will divide us, it will not unify us".

© AP Photo / Andrew Harnik
'It’s Just Hard to Understand': Head of US Space Force Complains Not Many Realize Its Purpose
The remarks were followed by Lohmeier being removed from his post by Lieutenant General Stephen Whiting, who then initiated an investigation into Lohmeier's comments.

A Space Force spokesperson said that Whiting relieved Lohmeier of his post "due to loss of trust and confidence in his ability to lead", adding that the decision was based "on public comments made by Lt. Col. Lohmeier in a recent podcast".

Lt. Col. Lohmeier is a Patriot telling the truth about the attempted wokeification of our military - and worse.

His demotion is clearly retaliatory.

I will be seeking action on this in the Armed Services Committee.

Meanwhile, people should listen to the podcast & buy his book. https://t.co/GjSgyezaSG

The lieutenant colonel's ouster was criticised by Republican representative Matt Gaetz, who described the move as evidence of the "wokeification of our military", and pledged that he would be "seeking action on this in the Armed Services Committee".

Gaetz was echoed by GOP Senator Ted Cruz, who dubbed the decision to oust Lohmeir a "troubling" development.