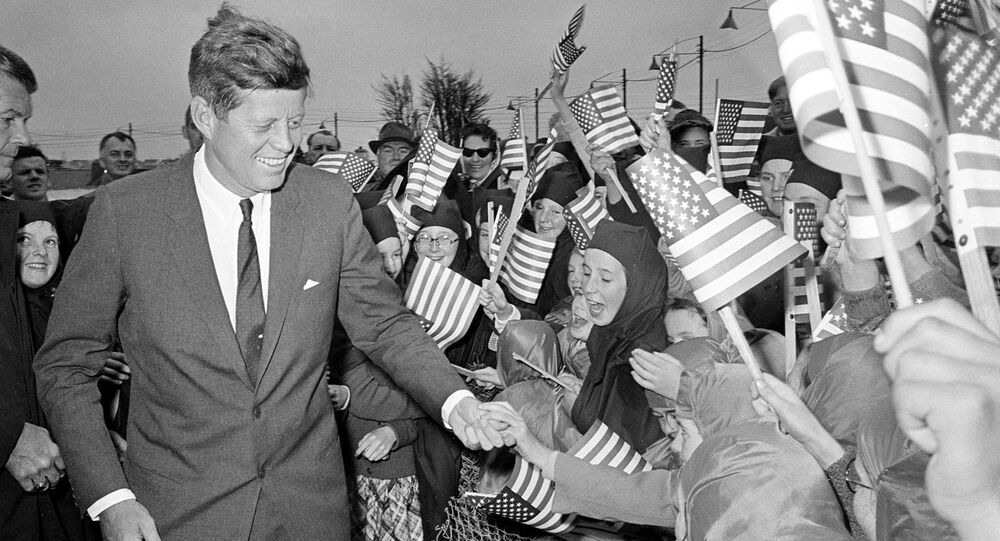 John F. Kennedy, the 35th president of the United States, was assassinated by a former US Marine, Lee Harvey Oswald, on 22 November, 1963 in Dallas, Texas, while travelling in an open automobile along a motorcade route. His death has spawned multiple conspiracy theories.

John F. Kennedy (JFK) ordered Secret Service agents during his campaign trip to drop back and tail him from a follow-up vehicle just days before his assassination, claims a new book ostensibly offering an account of presidential history from the Secret Service’s point of view.

The security detail was originally supposed to ride on special boards installed next to Kennedy’s car boot.

"It’s excessive… And it’s giving the wrong impression to people. We’ve got an election coming up. The whole point is for me to be accessible to the people," said Kennedy to Secret Service Supervisor Floyd Boring, according to "Zero Fail: The Rise and Fall of the Secret Service," by Washington Post reporter Carol Leonnig. The book, published by Random House, comes out 18 May.

A new book called “Zero Fail: The Rise and Fall of the Secret Service” is causing a stir in Washington and raising questions about the agency tasked with protecting the president. @HallieJackson reports. pic.twitter.com/Q0ULEstlzK

However, the assassination of the 35th president of the United States four days later on 22 November, 1963 in Dallas, Texas, while he was travelling in an open automobile left agents wondering whether they might have saved his life if it had not been for that order.

According to the official version, JFK, who had been riding in the vehicle on the fateful day with his wife Jacqueline Kennedy, Texas Governor John Connally, and his wife, was fatally shot by former US marine Lee Harvey Oswald.

Oswald supposedly fired his rifle from a building nearby.

The volume by Leonnig is touted as shedding light on various factors that might have rendered agents inadequately prepared for the incident.

The cited reasons range from insufficient budgets and political infighting to resistant protectees themselves and a “macho culture.” Kennedy, known for his personal charisma, made a record number of presidential trips outside the White House after taking up office in 1961, says the book.

(1/2) Don't miss: May 27 Pulitzer Prize-Winner @CarolLeonnig joins @evanasmith to discuss her new book "Zero Fail: The Rise and Fall of the Secret Service."

His agents reportedly struggled to provide security to a man so eager to directly interact with the public. “In private, Kennedy’s Secret Service agents saw a man courting danger,” Leonnig writes.

“Kennedy was extremely reckless with his own personal safety. His actions made some of his protectors uneasy and a few quite angry. Professionally, he was their toughest assignment yet.”

The White House’s Secret Service detail during Kennedy’s tenure listed 34 agents, working in six-man teams in rotating eight-hour shifts, writes the book, with the men forced to take on double-shifts on their days off.

"If anyone is crazy enough to want to kill a president of the United States, he can do it… All he must be prepared to do is give his life for the president’s," JFK is quoted as telling his spokesperson.

The Secret Service is described as depleted during his presidency after months of travel across the country as JFK began his fateful last tour of Florida and Texas in November 1963.

© AP Photo / Bob Schutz
A woman runs into the street and tosses President John Kennedy a floral lei, which he caught,during a motorcade through Honolulu June 9, 1963 from the Pearl Harbor Naval Base to a Waikiki Beach Hotel where he made a strong plea for civil rights before a conference of the nation's mayors

The day before the assassination, agents had reportedly been on duty for 24 hours. While several set off to a nightclub after work, arriving back at the hotel in the early morning hours, it's suggested they were sleep deprived.

On the day when disaster struck, Clint Hill, head of the first lady’s detail, was riding in the car behind the Kennedys. He was the first to realise shots had been fired at JFK.

“I knew I should have been on the back of that car!” Leonning cites Hill as saying, while adding, “His body could have kept the assassin from getting a clear shot.”

Bill Greer, who was driving the car, is described as slowing down after believing that a motorcycle had backfired. Lee Harvey Oswald, accordingly, may have found it easier to target JFK in his subsequent shots.

The third one hit Kennedy in the head, killing him.

'Love, Jack': JFK's Love Letters to Swedish Aristocrat to Be Sold at Auction