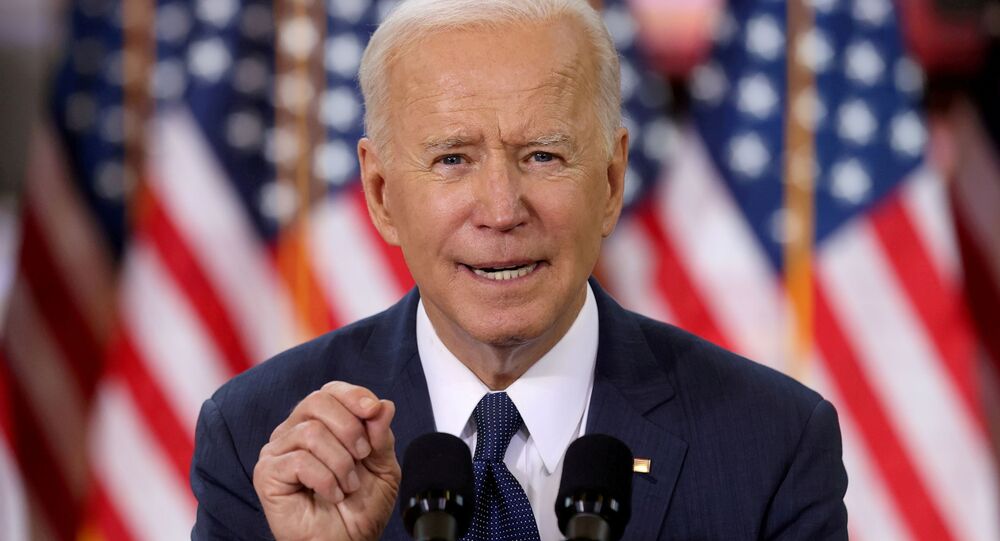 The Joe Biden administration has been facing a dramatic surge in arrivals at the US southern border, particularly unaccompanied children, with April seeing many migrants moved to HHS facilities instead. 20 Republican governors earlier signed a letter to the POTUS urging swift control of the crisis situation.

President Joe Biden reportedly had an angry temperamental outburst when confronting Health and Human Services (HHS) Secretary Xavier Becerra over how his department was dealing with the influx of migrant children amid the broader crisis gripping the US-Mexico border.

Biden, who was described earlier as having a “short fuse” and showing little patience with advisers who failed to adequately respond to his many questions, "lashed out" at Becerra during a White House meeting on 30 March, reported The New York Times.

Becerra reportedly fell foul of the President after failing to have ready answers regarding the agency’s ability to take care of migrant children, according to two people familiar with the exchange cited by the outlet.

The Biden administration has been struggling to deal with the influx of migrants at the southern border, particularly unaccompanied children.

The numbers of unaccompanied minors, who are not being removing via Title 42 public health protections that are being wielded to turn away some families and single adults, have reportedly decreased somewhat this month after the dramatic surge in March that witnessed overflowing Border Patrol facilities.

However, now the migrants have been moved to HHS facilities instead, with over 20,000 migrants in the agency’s custody, up from just under 12,000 at the end of March. Arrivals are being sheltered at more than 200 sites in multiple states, according to the Associated Press.

HHS is one of several departments managing the flow of migrants, including the Department of Homeland Security and FEMA.

Current HHS Secretary Xavier Becerra’s reportedly “cautious” approach to immigration policy has ostensibly not gone over well with some in the White House, according to Politico.

The former Democratic California attorney general was appointed to lead the agency in mid-March and was said to have been frustrated by the White House's moves to drop immigration restrictions and the tough migrant policies of the Trump era before he was confirmed, claimed the outlet.

© AP Photo / Ben Margot
In this Nov. 6, 2019, file photo California Attorney General Xavier Becerra gestures while speaking at a media conference in San Francisco. Forty million Californians will shortly obtain sweeping digital privacy rights stronger than any seen before in the U.S., posing a significant challenge to Big Tech and the data economy it helped create. “If we do this right in California," says Becerra, the state will "put the capital P back into privacy for all Americans.”

Becerra, known previously for urging congressional leaders to support liberalised legal immigration, has since made a U-turn, arguing for maintaining the low Trump-era cap on refugee admissions to the US, according to sources, as the resources of his department’s refugee office may be stretched to the limit.

Now, WH officials have reportedly "bristled" at his indecisive stance, urging HHS to speed up the intake of the tens of thousands of migrant children.

The developments come as the border continues to present a daunting challenge to the WH administration.

President Biden has put Vice President Kamala Harris in charge of diplomatic talks with Mexico and Guatemala as part of efforts to slow migration to the US-Mexican border.

"Our focus is to deal with the root causes, and I am looking forward to travelling, hopefully as my first trip, to the Northern Triangle, stopping in Mexico and then going to Guatemala," Harris told reporters in mid-April.

Meanwhile, twenty Republican governors this week wrote to Biden blaming his administration for the crisis, and voicing concern about HHS efforts to house children in their states.

“Allowing the federal government to place a potentially unlimited number of unaccompanied migrant children into our states’ facilities for an unspecified length of time with almost zero transparency is unacceptable and unsustainable,” stated the letter.

The governors slammed Biden’s border policies as having “enticed a rush of migrants to our border and incentivised an influx of illegal crossings by using irresponsible rhetoric and reversing a slew of policies — from halting border wall construction to eliminating asylum agreements to refusing to enforce immigration laws.”

Joe Biden had said he reversed Trump's immigration policies because they were unwarranted, inhumane and inconsistent with America's values.

He has also blamed the administration of ex-POTUS Trump for ongoing problems at the border, citing its failure to cooperate and share critical information during the presidential transition period.