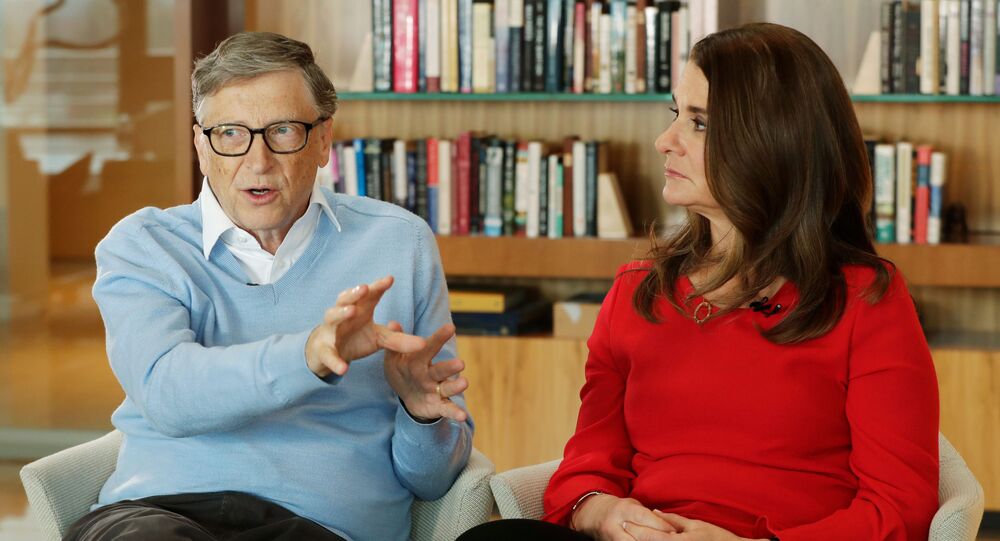 The announcement that Bill Gates and his wife Melinda Gates were going to separate was preceded by a report in The Wall Street Journal that an "irretrievably broken” marriage had prompted the software developer’s spouse to begin consulting divorce lawyers starting in 2019.

Melinda Gates, the estranged wife of American business magnate and philanthropist Bill Gates, had always been irked by the relationship between her soon-to-be ex-spouse and the late tycoon Jeffrey Epstein, arrested on charges of running a sex trafficking network of minors in 2019, reports PEOPLE.

© REUTERS / POOL New
Philanthropist and co-founder of Microsoft, Bill Gates (R) and his wife Melinda listen to the speech by French President Francois Hollande, prior to being awarded Commanders of the Legion of Honor at the Elysee Palace in Paris, France, April 21, 2017

While the co-founder of Microsoft Corporation denied having any substantial ties to the disgraced financier, who died in a prison cell in August 2019 while awaiting trial, the encounters between the two billionaires were ostensibly a cause for concern for Melinda Gates, an insider is cited as saying.

"Epstein is definitely a sore spot. That's a long time for issues to fester," the source reportedly said.

The high-profile couple announced their split after 27 years of marriage on 1 May, emphasising in a statement released on social media that they "no longer believe" they can grow together in the next phase of their lives.

Anything involving Epstein had been a "major trauma" for Melinda Gates, according to the source cited by the outlet.

"She was totally opposed to what she considered shady dealings and some other issues he wanted to pursue in the business area… She was not afraid to speak up about it either," the source added, while suggesting the split was due to a "variety of reasons".

The bombshell divorce announcement came in the wake of a report in The Wall Street Journal that cited sources as confiding that Melinda Gates had been consulting divorce lawyers since 2019 while struggling with an "irretrievably broken" marriage.

Furthermore, the outlet hinted that the software developer’s meetings with Jeffrey Epstein had been a serious cause for concern.

The criminal case against Epstein was dismissed due to his death inside a jail cell in August 2019 while awaiting trial on federal conspiracy and sex trafficking charges.

The New York Times reported in 2019 that Bill Gates first met Epstein after the latter had already been registered as a sex offender.

Finding himself in the media crosshairs, the software architect told The Wall Street Journal at the time that he did not have "any business relationship or friendship" with Epstein. However, according to The Times, the two men met multiple times starting in 2011, with Epstein proposing to help raise funds for the Bill and Melinda Gates Foundation - plans that never materialised.

© AP Photo / Aggie Kenny
In this courtroom sketch, defendant Jeffrey Epstein, second from right, listens along with defense attorneys, from left, Marc Fernich, Michael Miller, and Martin Weinberg as Judge Richard M. Berman denies him bail during a hearing in federal court, Thursday, July 18, 2019 in New York. Judge Berman denied bail for the jailed financier on sex trafficking charges, saying the danger to the community that would result if the jet-setting defendant was free formed the "heart of this decision."

After the Epstein scandal erupted in 2019, Bridgitt Arnold, a spokeswoman for Bill Gates, said the two men had met to discuss philanthropy.

After announcing that he and his wife Melinda were going to separate, Bill Gates, 65, spent time at a luxury golf club - The Vintage Club - in California, according to a Page Six report,where the magnate owns a $12.5 million mansion with six bedrooms and nine bathrooms on the property.

"It is the perfect place for Bill to hide out from anyone who wants to question him about his divorce or his alleged ties to Epstein," a source was quoted as saying.

"I think the whole family wishes this would go away so they can return to their lives — whatever that may be now," the source was cited by PEOPLE as adding.