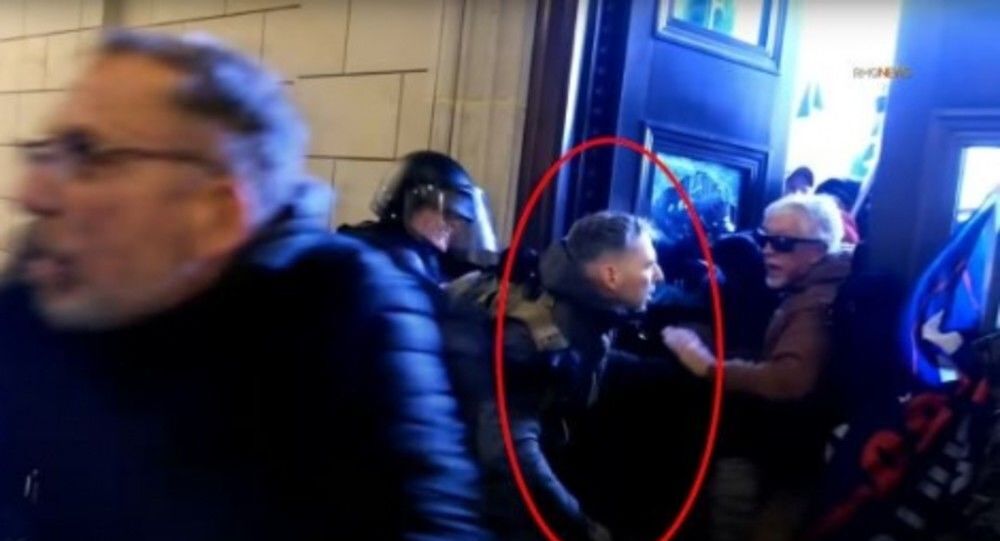 The Justice Department has said it has already charged around 440 people, including more than 40 military veterans, national guardsmen and reservists, over the storming of the US Capitol hours after former US President Donald Trump's 'Stop the Steal' rally outside the White House in protest of alleged electoral fraud.

A serving US Marine major has become the first active-duty serviceman to be charged over the January 6 occupation of the US Capitol.

The US Department of Justice (DoJ) said Major Christopher Warnagiris has been charged with assaulting, resisting or impeding officers, obstruction of law enforcement, obstruction of justice and other charges for his role in the attempt to disrupt the confirmation of the 2020 presidential election that handed victory to Democratic candidate Joe Biden.

"Warnagiris violently entered the Capitol on Jan. 6, after pushing through a line of police officers guarding the East Rotunda doors," the DoJ said in a statement. "Once inside, Warnagiris positioned himself in the corner of the doorway, using his body to keep the door open and pull others inside."

The US Marine Corps confirmed that Warnagiris was on active duty — in a statement that implied he was a "racial extremist" for participating in the occupation.

"There is no place for racial hatred or extremism in the Marine Corps," a spokesperson said. "Our strength is derived from the individual excellence of every Marine regardless of background. Bigotry and racial extremism run contrary to our core values."

Warnagiris' service record shows that he is a field artillery officer who joined the corps in 2002 and served in both Afghanistan and Iraq. He is currently assigned to training staff at Marine Corps Base Quantico in Virginia, south-west of Washington DC.

The Justice Department has said it has already charged around 440 people, including more than 40 military veterans, national guardsmen and reservists, over the storming of the seat of Congress hours after then-president Donald Trump's held the 'Stop the Steal' rally outside the White House in order to protest alleged electoral fraud.

© REUTERS / POOL
'Slap in the Face': Biden Sparks Fury as He Calls Capitol Riot 'the Worst Attack on Democracy Since the Civil War'
The only confirmed violent death during the unrest was that of 35-year-old unarmed protester Ashli Babbitt, a 14-year US Air Force veteran who was shot dead by a US Capitol Police (USCP) officer as she tried to climb through a broken window to reach the door of the House of Representatives chamber.