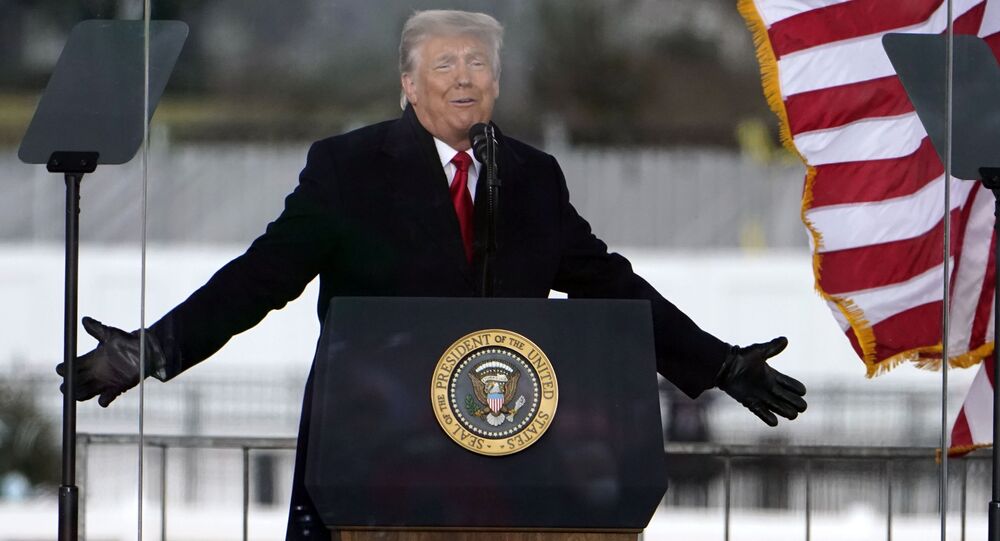 Trump Reportedly Plans to Restart His Rallies in June 2021

The former president had suspended all mass gatherings with his followers after the attendees of his last rally stormed the building of the US Congress on 6 January. Democrats and some Republicans claimed the attack was incited by the fiery speech Trump gave at the event about alleged voter fraud that took place during the presidential election.

Donald Trump is planning to return to holding rallies with his supporters this June, an anonymous adviser told the Daily Mail. The ex-POTUS reportedly seeks to hold two gatherings in June and one rally around 3 July, with the events being styled after the airport-based events he organised at the end of his 2020 election campaign. His team, however, is still reportedly working out the details of the events.

"The president is anxious to get back out on the trail and we are getting a lot of offers and invitations from both candidates and political causes in different areas", the source claimed.

According to the media's report, Trump plans to capitalise on the perceived mistakes of his 2020 rival, President Joe Biden, and lay down a basis for a possible 2024 presidential campaign during these rallies. He will reportedly raise the ongoing issues at the southern border, mention the confrontation between Palestinians and Israelis, as well as condemn the problems with fuel supplies caused by the cyber-attack on the Colonial Pipeline.

"If there were long and horrible gas lines like this under President Trump, the Fake News would make it a national outrage! Did Joe Biden put Hunter in charge of our energy, with all of his Burisma experience?" Trump wondered while referencing Hunter's controversial employment with the Ukrainian gas company.

If reports turn out to be true, the June rallies would become the first held by Trump since the 6 January Capitol riot. Back then, some of the attendees of his "Stop the Steal" rally in Washington stormed the Congress building as lawmakers were in the process of certifying election results, which Trump rejected. As a result, the Democrats, as well as some Republicans, blamed the then-president and his repeated claims of voter fraud in the 2020 election for triggering the riot and endangering the lives of lawmakers. Trump rejected all the allegations and survived a second impeachment trial triggered under the charge of inciting an insurrection on that day in Washington.

PSYCH! Trump Says Comparing Biden to Jimmy Carter is an Insult — to Carter