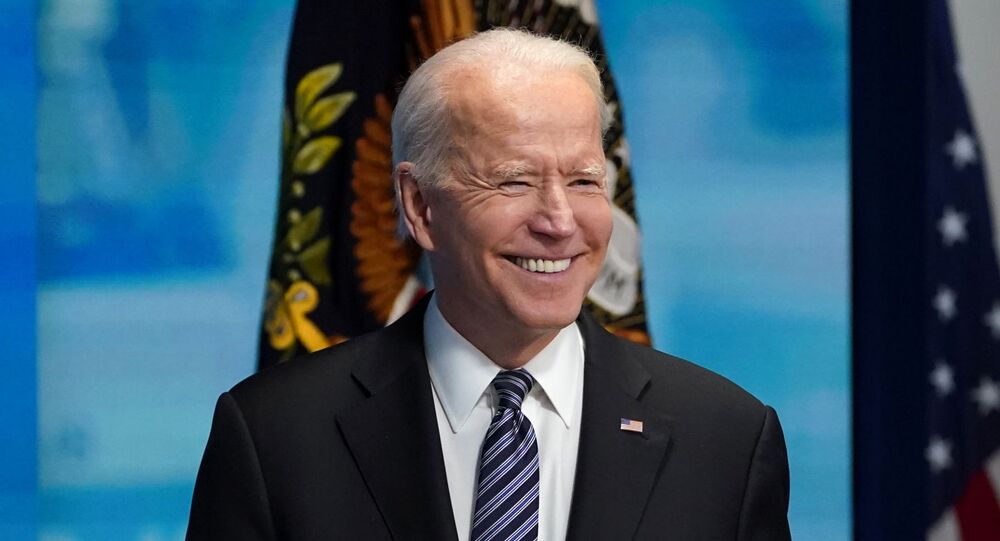 In late Match, Joe Biden grabbed global headlines after having trouble walking up the stairs to Air Force One before travelling to Atlanta. The incident sparked another round of debate on the US president's physical health.

A 124-strong group of retired American military leaders has questioned the president's fitness for office, also apparently challenging the results of the 2020 US presidential election.

In a letter released by the organisation Flag Officers 4 America earlier this week, former US admirals and generals claimed the "Constitutional Republic is lost" without "fair and honest elections that accurately reflect the will of the people".

© AFP 2021 / MELINA MARA
US President Joe Biden addresses a joint session of Congress at the US Capitol in Washington, DC, on April 28, 2021.

"The FBI [Federal Bureau of Investigation] and Supreme Court must act swiftly when election irregularities are surfaced and not ignore them as was done in 2020", the letter added, referring to the 3 November 2020 polls.

Ex-US President Donald Trump and his lawyers have repeatedly claimed massive voter fraud in several US states, including using deceased voters' identities to cast ballots in favour of Democrat Joe Biden during what the former POTUS described as the "most corrupt" elections in US history.

The signatories argued that "H.R.1 & S.1 [bills on voter access and election integrity], (if passed), would destroy election fairness and allow Democrats to forever remain in power violating our Constitution and ending our Representative Republic".

Separately, the retired American generals referred to the "mental and physical condition of the [US] Commander in Chief", which they stressed "cannot be ignored".

"He must be able to quickly make accurate national security decisions involving life and limb anywhere, day or night. Recent Democrat leadership's inquiries about nuclear code procedures sends a dangerous national security signal to nuclear armed adversaries, raising the question about who is in charge. We must always have an unquestionable chain of command", the letter emphasised.

Then-POTUS Trump repeatedly to jabs at Biden's purported mental issues and age during the 2020 election campaign, sometimes referring to the then-Democratic presidential hopeful as "sleepy Joe".

Another round of debates on the 78-year-old's physical health was triggered by an incident in March, when Biden stumbled three times and at one point fell to his knees as he walked up the stairs of Air Force One ahead of a flight to Atlanta. The president's doctor Kevin O'Connor, however, asserted in a recent report that Biden is a "healthy, vigorous […] male, who is fit to successfully execute the duties of the presidency".

The signatories also accused the Biden administration of launching "a full-blown assault on our Constitutional rights in a dictatorial manner" by reversing the Trump team's "effective policies and regulations".

"Our Nation is in deep peril. We are in a fight for our survival as a Constitutional Republic like no other time since our founding in 1776. The conflict is between supporters of Socialism and Marxism vs. supporters of Constitutional freedom and liberty", the letter argued.

Retired US General Claims America is in 'Dire' Situation

Politico has, meanwhile, reported that the letter was initiated by retired Army Maj. Gen. Joe Arbuckle, a Vietnam veteran who left the military service back in 2000.

He told the US news outlet that "retired generals and admirals normally do not engage in political actions, but the situation facing our nation today is dire and we must speak out in order to be faithful to our oath to support and defend the Constitution of the US against all enemies, foreign and domestic".

© REUTERS / Carlos Barria
Video: Trump Warns 'People Are Furious' Over Election Results in First Interview Since Capitol Riot
He stressed the letter's main purpose was to bring national security-related threats to "the attention of the American people", adding, "to remain silent would be a dereliction of duty".

Retired Admiral Mike Mullen, a former chair of the US Joint Chiefs of Staff, for his part, slammed the letter as something that "hurts" both the military and the country, and which is full of "right-wing Republican talking points".