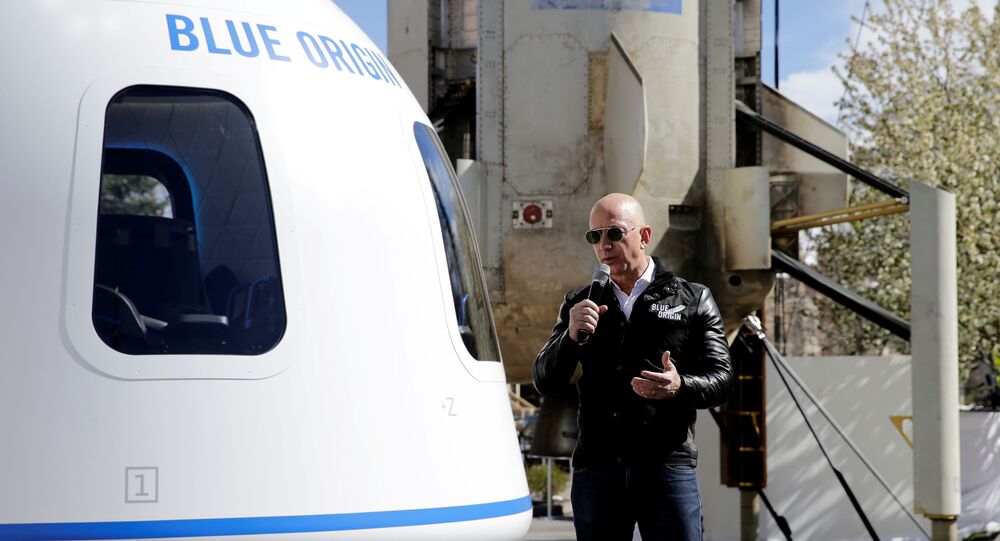 In late April, NASA suspended a hefty contract for the creation of a lunar module with Elon Musk's SpaceX due to protests from competitors, Jeff Bezos' Blue Origin, and defence contractor Dynetics, with the Government Accountability Office.

The claims are part of American journalist Brad Stone's book titled "Amazon Unbound: Jeff Bezos and the Invention of a Global Empire", released on Tuesday.

© AP Photo / Joel Kowsky
In this Monday, Nov. 9, 2020 photo provided by NASA, a SpaceX Falcon 9 rocket and Crew Dragon capsule is rolled out of the horizontal integration facility at Launch Complex 39A, as preparations continue for a crewed mission at NASA's Kennedy Space Center in Florida.

According to the author, Elon Musk's company’s spate of accomplishments in 2016 and Blue Origin lagging behind at the time allegedly prompted Bezos to reach out to SpaceX COO Gwynne Shotwell in a bid to hire her as Blue Origin's chief executive.

Shotwell was ostensibly quick to decline the offer, saying that it "wouldn't look right", and Blue Origin finally picked Bob Smith, president of a division at Honeywell Aerospace, to fill the CEO role in 2017.

The author also claimed the Blue Origin search followed an array of meetings with the company's executives, during which they ostensibly complained about the firm's "poor internal communication, time-consuming meetings, and inexplicable spending decisions".

"One engineer described the company as a Potemkin village — its dysfunctional culture concealed beneath an industrious facade", Stone asserted.

The claims followed US space agency NASA announcing the suspension of a contract for the creation of a lunar module with SpaceX worth about $2.9 billion due to protests from two competitors with the Government Accountability Office. The latter included Blue Origin and defence contractor Dynetics.

Bezos' company insisted, among other things, that NASA allowed SpaceX to revise its bid but did not allow Blue Origin to do so because it "moved the goalposts at the last minute". The GAO confirmed that Dynetics had also questioned NASA's contract award to SpaceX.

The suspension comes amid a long-running space exploration-related feud between Bezos and Musk. The Tesla and SpaceX CEO has regularly joked about Blue Origin's attempts to block his cooperation with NASA, despite the Bezos-led company having been unable to provide a reliable working spacecraft.

Sputnik Screenshot
Watch: Blue Origin’s New Shepard Rocket Nails ‘Astronaut Rehearsal’ Vertical Landing Test
The Amazon founder refrains from direct attacks on Musk, but has repeatedly criticised the main goal of SpaceX - the colonisation of Mars, as unrealistic, focusing on achieving a permanent presence on the Moon instead.

In 2019, Bezos said that one should "go live on the top of Mount Everest for a year first and see if you like it, because it's a garden paradise compared to Mars".

It seems that adding fuel to the feud's fire was the fact that in January 2021, Musk outstripped Bezos as the richest person on the planet with an estimated net worth of more than $185 billion, a title that the Amazon founder has held since 2017.