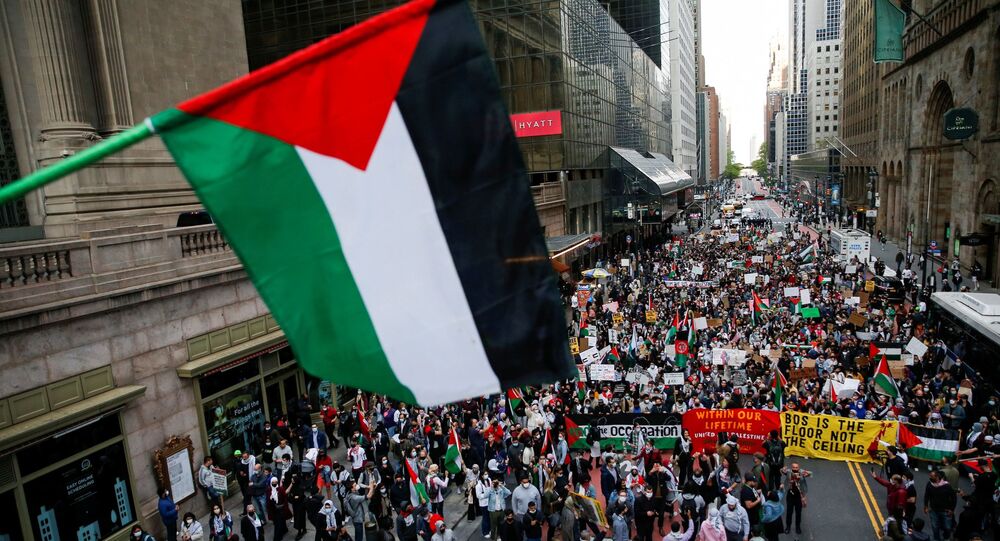 NEW YORK CITY (Sputnik) - At least a thousand pro-Israel and pro-Palestinian protesters clashed at a demonstration near the Israeli consulate in New York City over the recent escalation of violence in the Gaza Strip and East Jerusalem, a Sputnik correspondent reported from the scene.

The demonstration did not turn violent Tuesday afternoon, however, it grew tense as both sides faced off near the Israeli consulate. The New York City Police Department separated the demonstrators with metal guard rails with officers standing in between and around the area.

Pro-Palestinian protesters in a confrontation with pro-Israel protesters yelled "Free Palestine," “Go back to Europe” and “Fight back.”

Massive march for Palestine outside the Israeli consulate in New York City pic.twitter.com/pbXqTLqlEt

Eventually, pro-Palestinian protesters blocked 42nd Street in Manhattan, waved the Palestinian flag and held up signs that read, "No Annexation, No Occupation," "Support Palestinian Resistance," and "With Every Stomp, Every Shout, Freedom For Palestine Without a Doubt."

Israeli supporters were seen screaming “What is Palestine?” as some waved the national flag of Israel.

The largest escalation in recent years at the Gaza border began on Monday evening. During this time, more than 600 rockets were fired from the Gaza Strip at Israel. The Iron Dome missile defense system intercepted 200 of them. Israel also delivered strikes on the Gaza Strip, which, as the Palestinian enclave's Health Ministry spokesman said earlier, killed 30 people, including ten children, in two days.

Earlier, chairman of the political bureau of radical Palestinian movement Hamas, Ismail Haniyeh, announced the organization's intention to protect the interests of Palestinians in Jerusalem and respond to Israel's actions, thus defining a new balance of forces in the confrontation.