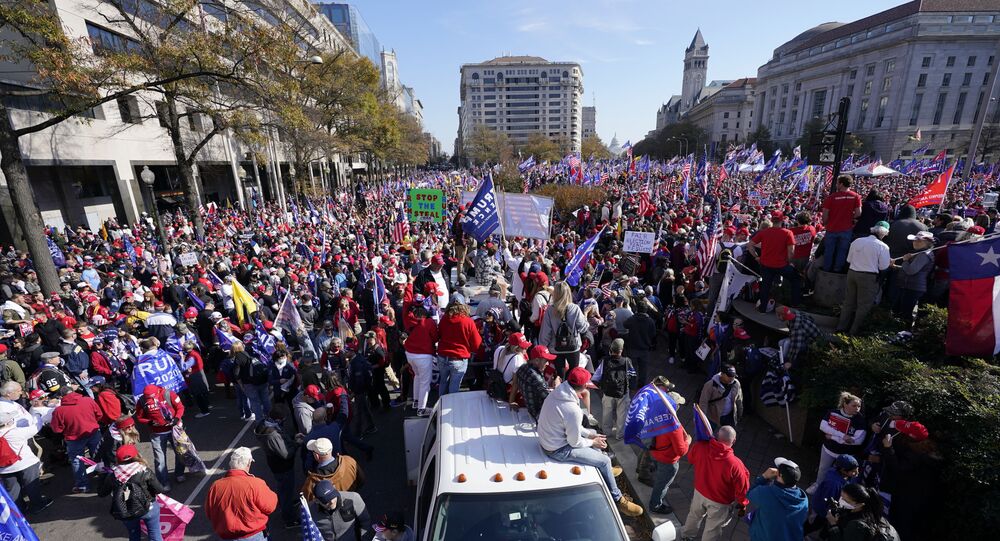 Last Friday, the Texas House of Representatives passed a bill, which according to its authors, would make sure only legal votes are cast. In particular, the legislation expands the powers of poll watchers to be present at the polling station and observe the process.

Following the 2020 November elections, GOP poll watchers complained that they had been either restricted from properly observing the count or altogether banned from entering the counting hub. Besides this, the new bill prohibits early voting clerks from sending unsolicited mail ballot requests to voters, makes "paid vote harvesting" a criminal offence, and introduces other penalties for voting irregularities.

"This bill will help ensure that we have trust and confidence in the outcome of our elections," tweeted Texan Governor Greg Abbott on 7 May. "One step closer to my desk and making it TX law."

On 6 May, Florida Governor Ron DeSantis signed similar legislation into law, while in late March Georgia adopted the "Election Integrity Act of 2021" seeking to strengthen voter identification and imposing limits on the acceptance of the absentee ballots within 11 days of an election, among other measures.

The Democrats, activist groups, and some corporations are up in arms about the GOP initiative, claiming that the voter integrity laws are crippling rights of US citizens, especially black people.

The Texas House law has been recently denounced as "another Jim Crow elections bill" by Derrick Johnson, CEO of the National Association for the Advancement of Coloured People.

"We stand together, as a nonpartisan coalition, calling on all elected leaders in Texas to support reforms that make democracy more accessible and oppose any changes that would restrict eligible voters’ access to the ballot," the open letter said. "We urge business and civic leaders to join us as we call upon lawmakers to uphold our ever elusive core democratic principle: equality."

Florida and Texas are critical in the election fight as their populations are booming and 70 Electoral College votes are shared between them, according to The New York Times.

The resistance to the Texan election bill bears a strong resemblance to what happened in Georgia shortly before and after Governor Brian Kemp (R-GA) inked the Election Integrity Act of 2021 into law. A vast variety of black and racial justice organisations denounced the legislation as "racist," while President Joe Biden called the new Georgian law "Jim Crow in the 21st Century."

Georgia voters overwhelmingly opposed moving the All Star Game from Atlanta & an even higher number of Georgia voters are opposed to companies getting involved in politics per new AJC poll. Good job MLB! https://t.co/pyK8MvPdnL

​Concurrently, Major League Baseball (MLB) moved the 2021 All-Star Game from Atlanta, GA, in response to the voting law, therefore inflicting serious economic damage to the city's businesses. Coca-Cola, Delta, United, and several other companies also blasted the legislation in what appeared to be a coordinated wave of corporate backlash.

The American Civil Liberties Union specifically criticises voter identification laws, claiming that they are "part of an ongoing strategy to roll back decades of progress on voting rights."

"Many Americans do not have one of the forms of identification states acceptable for voting," insists the non-profit organisation. "These voters are disproportionately low-income, racial and ethnic minorities, the elderly, and people with disabilities."

However, most voters, including black and Latino people, actually support voter ID requirements, argued Ken Blackwell, the African American politician and former Ohio Secretary of State, in his April op-ed for the USA Today. Therefore, according to an Associated Press poll, 72 percent of respondents support voter ID laws. In addition to that, Rasmussen Reports found that 69 percent of African Americans and 82 percent of other nonwhite minorities endorse the measure.

Blackwell also shredded the assumption that a US citizen cannot obtain an ID, stressing that almost every American of voting age has such an ID and that every state with ID requirements issues a free ID to those who don't already have one.

The battle over the election laws comes as the Democratic Party is seeking to pass a partisan H.R.1, the For the People Act, in the US Senate. If adopted, the bill would considerably loosen voting regulations, abolish requirements for ID verification, legalise ballot harvesting and mass sending of absentee ballots across the nation. In addition to that, the legislation provides the federal centre with sweeping powers over how US states vote.

"If H.R. 1 is enacted, our elections will be vulnerable as decades of good governance will be thrown out and replaced with half-baked left-wing talking points," Blackwell believes.

Trump Supporters Preparing for Next Elections

Meanwhile, on 5 May, conservative allies of former President Trump announced the formation of the Election Integrity Alliance under the auspices of the American Greatness Fund.

The new organisation will be "focused on ending election fraud and strengthening election safeguards by providing information, resources, endorsements of allies’ efforts, and solutions to secure free and fair elections."

Speaking to Sebastian Gorka's podcast America First last Wednesday, former Trump attorney Jenna Ellis explained that the new alliance is a national initiative but that its mission has to be executed primarily at the states' level. It is the states' legislatures that run elections and they have to use their Constitutional powers to ensure election integrity, Ellis underscored.

.@JennaEllisEsq urges all 50 states to reclaim their constitutional obligation under Article 2 Section 1.2
to fight election corruption.

​Politico notes that the American Greatness Fund is just part of "an ever-expanding web of Trump-aligned advocacy groups," which have started emerging since the 2020 election. The media outlet in particular refers to the America First Policy Institute, launched by ex-Trump senior advisers Brooke Rollins and Larry Kudlow; the American Cornerstone Institute, created by former Trump administration official Ben Carson; the Centre for Renewing America, kicked off by yet another Trump official, Russ Vought; America First Legal, formed by former Trump speechwriter Stephen Miller, and many other organisations.

Citing conservative observers, the media outlet notes that the aforementioned groups are intended to serve "as key in a broader effort to match a formidable liberal 'dark money' machine."