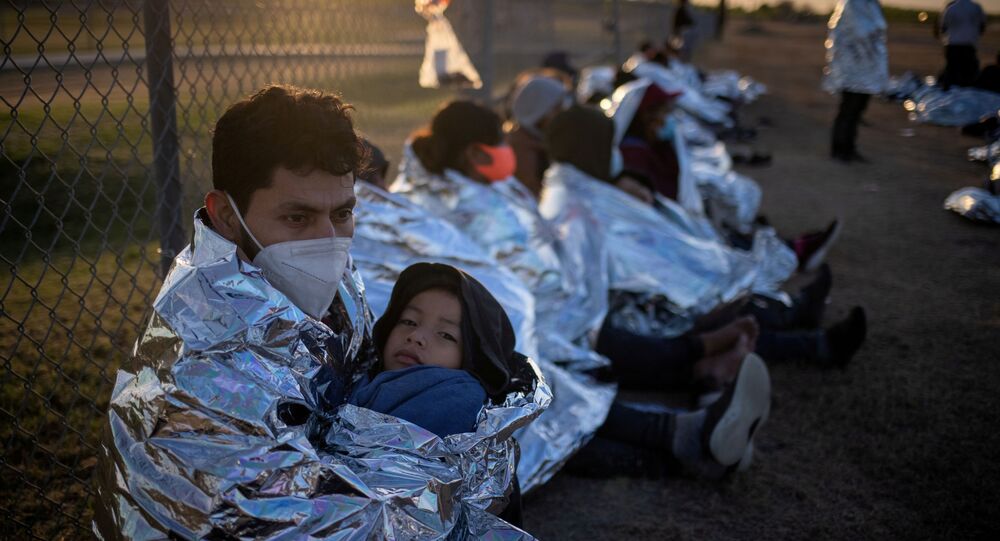 The number of unaccompanied children encountered by US border authorities reached nearly 19,000 in March - the highest number on record in the third major surge of families and children arriving from Central America since 2014, with Republicans blaming the Biden Administration for reversing ex-President Donald Trump’s immigration policies.

The Joe Biden administration has spent $3 billion in contracts to house unaccompanied minors amid the crisis situation at the US-Mexico border, reported The Associated Press.

As US border facilities continue to battle an influx of migrants crossing the southern border on a daily basis, the US government is believed to have awarded shelter-construction and management contracts worth about $3 billion to a range of private companies, according to HHS and federal spending records cited by the outlet.

Since February, over $2 billion of the contracts were reportedly "no-bid" ones, awarded to three recipients - two companies and a nonprofit - which have traditionally been involved in natural disaster response and, more recently, employed amid the COVID-19 pandemic.

Deployed Resources has been hired to run a 1,500-bed emergency shelter for children in Donna, Texas, for which it could receive up to $719 million.

The nonprofit group Family Endeavors Inc. is a disaster-relief agency which reportedly could receive up to $580 million for a site in Pecos, Texas.

© REUTERS / GO NAKAMURA
Central American migrants climb over a fence as they are detained by U.S. Border Patrol agents after crossing the Rio Grande river into the United States from Mexico in La Joya, Texas, U.S., April 27, 2021.

Rapid Deployment Inc., has ostensibly received two contracts totalling $614 million for a site in Fort Bliss, Texas, which could be expanded to offer 10,000 beds, according to cited government solicitation documents.

However, the reported lack of a bidding process, as well as exemption from staffing requirements that state-licensed child facilities must meet, gave triggered concerns.

Critics fear that the facilities being erected in such haste might not be equipped to adequately care for minors.

The US Department of Health and Human Services (HHS) has failed to explain why two of these facilities were suddenly closed in the past few weeks, according to the report.

An HHS statement only emphasised that they were for temporary use and the minors had been sent to different temporary sites or reunited with their families. According to attorneys who visited some of the sites, children there claimed they had not met with case managers tasked with reuniting them with family members.

“When we are spending hundreds of millions of dollars, the government has to ensure that the services are being provided and that we are meeting the needs of the children,” Scott H. Amey, general counsel at the Project on Government Oversight, was quoted as saying.

The new child-migrant centres were lauded in an HHS statement as being “consistent with best practices/standards in emergency response or other humanitarian situations”.

Sarah DeYoung, a University of Delaware professor studying evacuation shelters, was cited as expressing concern that some sites have a “very institutional setting feel”, which might not be optimal for housing children.

“Just because those were selected in the past doesn’t mean they are doing it well in terms of children’s well-being,” said DeYoung.

The report comes as the United States faces its biggest immigration crisis in decades.

Tens of thousands of would-be illegal immigrants attempt to cross into the country via the southern border with Mexico. Authorities encountered 18,890 unaccompanied children in March, according to US Customs and Border Protection, which is well above previous highs of 11,475 in May 2019.

​US Rep. Bill Johnson, R-Ohio, was part of a three-member group of Congressional Republicans from the region who paid a visit to the border on 5 May, blaming the surge in immigration on policies of President Joe Biden.

“Yesterday, I witnessed firsthand the humanitarian, health, and national security crisis the Biden Administration has created on our southern border,” he said in a statement on Thursday, adding:

“By reversing President Trump’s immigration policies, such as cancelling the border wall construction and reinstating the ‘catch and release’ policy, our border patrol agents have been put in a nearly impossible position.”

Conservatives have widely denounced the Biden administration for scrapping a plethora of Trump-era hardline directives related to immigration.

The White House has attempted to deflect the criticism, blaming Donald Trump and the "cyclical" nature of migration for the crisis.