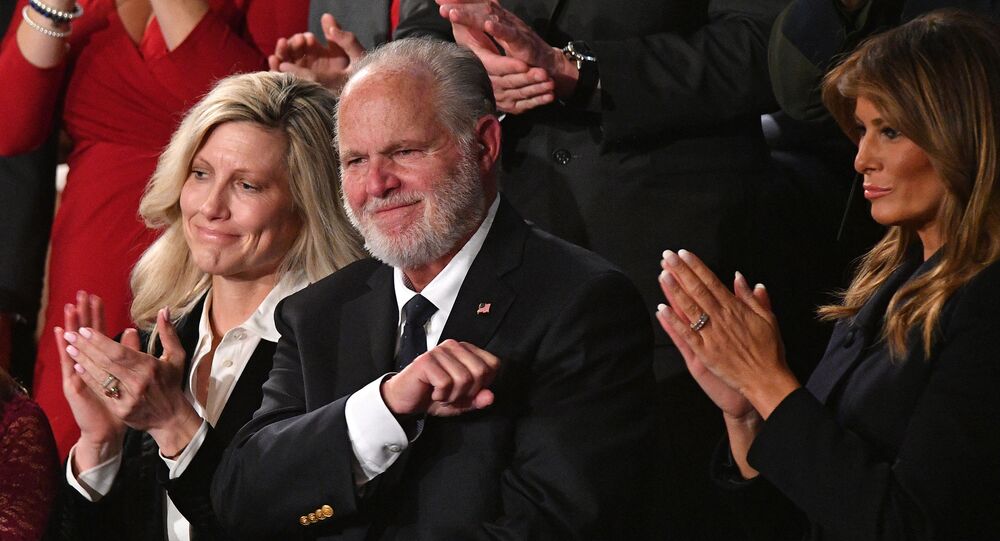 The Missouri House of Representatives voted on Friday to approve "Rush Limbaugh Day" in the state, in a move to honor the late conservative icon, according to the St. Louis Post-Dispatch.

The day would be instituted on 12 January, the birthday of Limbaugh, if approved by the state Senate before the end of the legislative session next Friday.

"Rush demonstrated courage to speak boldly and encouraged his listeners and viewers to reach for their dreams and to push onward beyond the naysayers and discourages that we all encounter in life", Ashland Republican Representative Sara Walsh said, cited by the outlet.

The conservative commentator died on 17 February, 2021. He was most famous for hosting "The Rush Limbaugh Show" and delivering opinions, especially on feminism, LGBTQ, sexual consent and other topics, that some people deemed controversial.

© AFP 2021 / MARIO TAMA
WASHINGTON, DC - FEBRUARY 04: Radio personality Rush Limbaugh reacts as First Lady Melania Trump gives him the Presidential Medal of Freedom during the State of the Union address in the chamber of the U.S. House of Representatives on February 04, 2020 in Washington, DC. President Trump delivers his third State of the Union to the nation the night before the U.S. Senate is set to vote in his impeachment trial.

Limbaugh was inducted into the National Radio Hall of Fame and the National Association of Broadcasters Hall of Fame. In 2020, the former US president, Donald Trump, during his State of the Union Address, awarded the commentator the Presidential Medal of Freedom.

"Rush Limbaugh: Thank you for your decades of tireless devotion to our country," Trump said at the time.