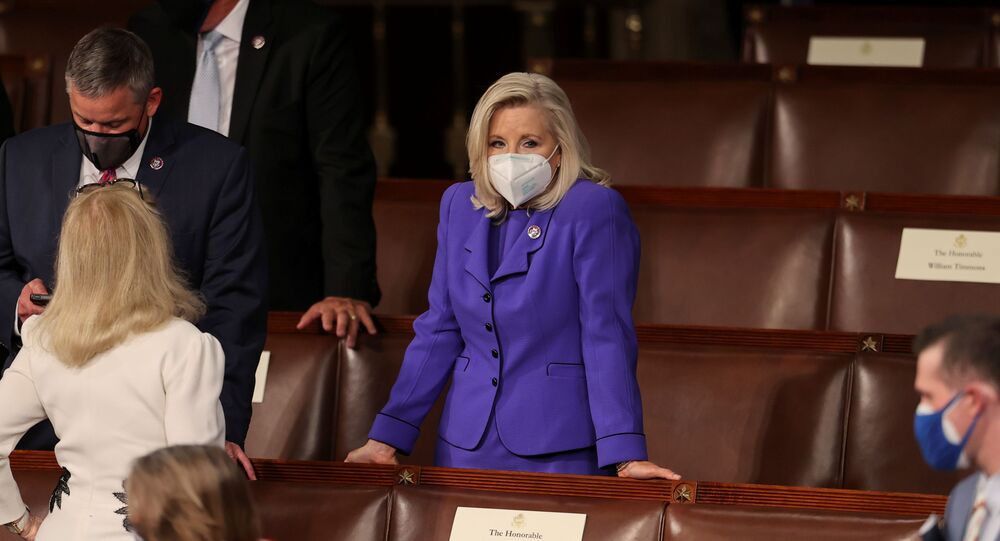 House Republican Conference chair Liz Cheney found herself in the crosshairs of her fellow GOP members recently for refusing to support claims that the former US president, Donald Trump, won the 2020 election. Next week, House Republicans are expected to vote on her possible ouster.

The third-highest ranking Republican in the House of Representatives, Liz Cheney, orchestrated a Washington Post op-ed signed by all 10 living Defense Secretaries that warns against the involvement of the military in the elections, The New Yorker reported on Friday, citing a friend of Cheney's.

According to Eric Edelman, described by The New Yorker as Cheney's friend, it was her who planned the op-ed and helped make it happen.

“She was the one who generated it, because she was so worried about what Trump might do,” Edelman told the outlet. “It speaks to the degree that she was concerned about the threat to our democracy that Trump represented.”

In the joint op-ed, the secretaries insisted that “there’s no role for the US military in determining the outcome of a US election.” Before the certification of the election results took place, Cheney also rolled out a memo voicing her opposition to efforts to overturn the outcome of the presidential race.

"Objecting to these electoral slates would unavoidably assert that Congress has the authority to overturn elections and overrule state and federal courts", the introduction to her memo said. "That would set an exceptionally dangerous precedent, threatening to steal states’ explicit constitutional responsibility for choosing the President and bestowing it instead on Congress. This is directly at odds with the Constitution’s clear text and our core beliefs as Republicans."

For her reluctance to back claims that Trump was the winner of the 2020 election, Cheney faced the possibility of being ousted as House Republican Conference chair, with her fellow House Republicans expected to vote on the move next week.

On Monday, Cheney took to Twitter to reiterate her stance on the alleged election fraud.

"The 2020 presidential election was not stolen. Anyone who claims it was is spreading THE BIG LIE, turning their back on the rule of law, and poisoning our democratic system", she wrote.

The 2020 presidential election was not stolen. Anyone who claims it was is spreading THE BIG LIE, turning their back on the rule of law, and poisoning our democratic system.

"Liz Cheney is a warmongering fool who has no business in Republican Party Leadership. We want leaders who believe in the Make America Great Again movement, and prioritize the values of America First", Trump posted on his new online communications platform website on Wednesday. "Elise Stefanik is a far superior choice, and she has my COMPLETE and TOTAL endorsement for GOP Conference Chair. Elise is a tough and smart communicator!"

This is the second vote to oust Cheney, with her surviving the first in February, shortly after she joined nine other Republicans in their vote for to impeach Trump a second time for "incitement of insurrection".

The second vote on Cheney is expected to be held on 12 May.