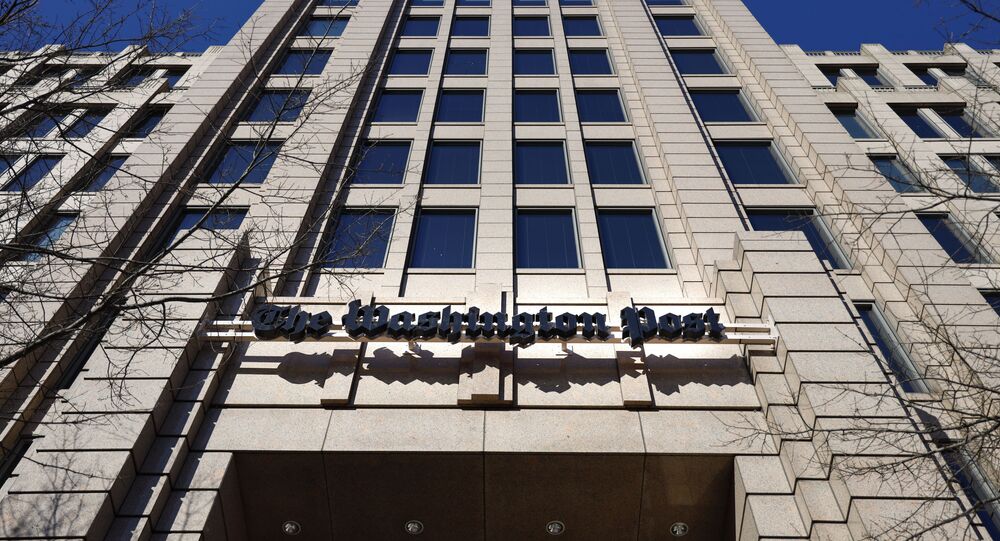 Although many US presidents have hailed the role of the press and promised to protect “legitimate” whistleblowers, the pace of US government crackdowns on whistleblowers and press organs as well as the probing and assault of journalists have accelerated, especially in the final years of the Trump administration that ended in January.

According to the Washington Post, three of its journalists were recently notified by the US Department of Justice that call records for all of their phones had been obtained by the department for three months in 2017.

The three reporters - Ellen Nakashima, Greg Miller, and Adam Entous, the latter of whom is no longer employed there - received letters from the DOJ on May 3 notifying them of the event.

According to the paper, the letters said they were “hereby notified that pursuant to legal process the United States Department of Justice received toll records associated with the following telephone numbers for the period from April 15, 2017 to July 31, 2017.”

“We are deeply troubled by this use of government power to seek access to the communications of journalists,” Cameron Barr, the Washington Post’s acting executive editor, said in a statement. “The Department of Justice should immediately make clear its reasons for this intrusion into the activities of reporters doing their jobs, an activity protected under the First Amendment.”

According to the Post, an article dating to the period by the trio of reporters, titled “Sessions discussed Trump campaign-related matters with Russian ambassador, US intelligence intercepts show,” might have been of interest to the DOJ. The article is about a 2016 phone conversation between Russia’s-then ambassador to the US, Sergey Kislyak, and then-Sen. Jeff Sessions (R-AL), who later became attorney general under Trump, in which they discussed Trump’s electoral campaign then underway. Sessions had recused himself in March 2017 from heading the Russiagate probe, leaving it to his deputy, Rod Rosenstein.

DOJ spokesperson Marc Raimondi informed the Post that the request was made “as part of a criminal investigation into unauthorized disclosure of classified information” - in other words, they were chasing a leak.

The decision to obtain reporters’ records while pursuing a leak investigation has to be made by the attorney general, the Post wrote, noting Raimondi had said the information was sought in 2020. It was thus very likely William Barr who approved the move, since he was attorney general for all but one week of the year.

“The targets of these investigations are not the news media recipients but rather those with access to the national defense information who provided it to the media and thus failed to protect it as lawfully required,” Raimondi continued.

However, it’s illegal to classify information in order to conceal illegal activity and federal government employees who reveal illegality are protected under the Whistleblower Protection Act of 1989.

“Usually whistleblowers are called ‘leakers,’ until they’re able to convince the public that they’re whistleblowers,” former CIA agent-turned whistleblower John Kiriakou told Sputnik in 2019. “A whistleblower is any person who brings to light evidence of waste, fraud, abuse, illegality or threats to the public health or public safety.”

The Obama administration certainly ignored this fact as it prosecuted a record number of whistleblowers, but it was the Trump administration that indicted WikiLeaks co-founder Julian Assange for helping to publish damning information. Eighteen charges have been levied against Assange, who is currently being held in the UK’s Belmarsh Prison as the US seeks to extradite him, with 17 of those charges coming under the 1917 Espionage Act.

According to the DOJ, Assange helped then-US Army analyst Chelsea Manning hack into US government computers to steal the “Collateral Murder” video, which revealed the US government had lied about a July 2007 incident in Baghdad in which a US Army Apache helicopter gunship killed as many as 18 people, two of whom were Reuters journalists.

The Pentagon claimed the chopper had been attacked and the journalist caught in the crossfire, but the video shows unarmed people talking on a street corner. According to Manning, the video wasn’t classified, but she was nonetheless sentenced to 35 years in prison for leaking it to WikiLeaks, of which she served seven year in confinement before being pardoned in 2017.

In August 2017, amid a deluge of new leak reports, Sessions raged the DOJ was “taking a stand. This culture of leaking must stop.”

He then told the intelligence agencies the DOJ “is open for business” and warned “would-be leakers: don’t do it.” He claimed the department was reviewing media subpoena policies and valued the role of the press, but said it is “not unlimited.”

“We must balance the press’ role with protecting our national security,” Sessions said.