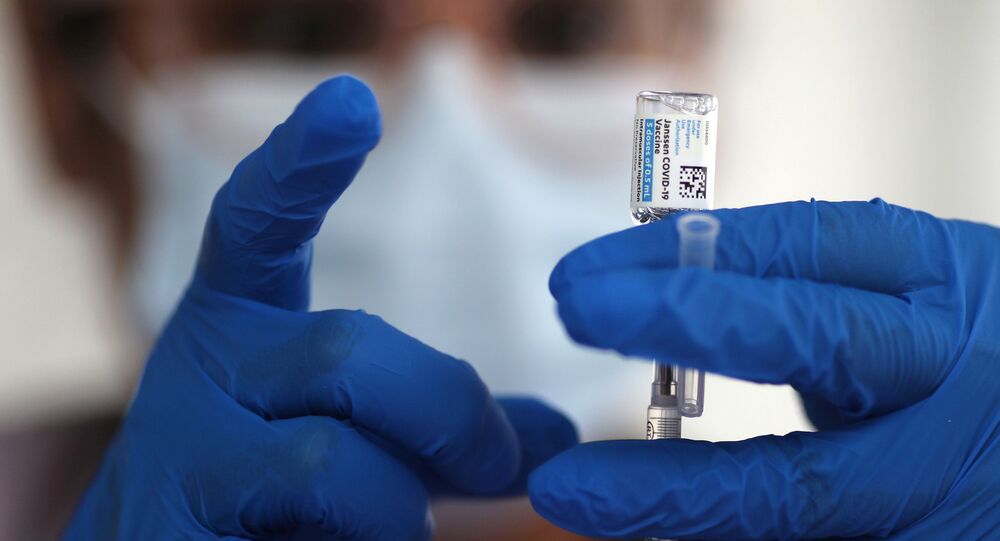 Despite anticipating vaccination rates to drop off in rural communities and among younger people hesitant about the jabs, state and federal officials were reported to have been caught off guard by a sharp decline in demand for vaccinations in certain “pockets of the US”.

The White House is reportedly being prompted to rethink its coronavirus vaccination strategy as falling inoculation rates spark fears that “straggler” pockets in the country might become breeding grounds for more dangerous virus variants.

As they observe developments in South Africa and Brazil, where several coronavirus mutations have been registered that might potentially spread more easily, evading immune responses, tests, and even shots, health officials in the US are deploring the plummeting vaccination rates registered for weeks in some southern and mountainous western regions, reported Politico.

Rates of #COVID19 are decreasing, but cases remain high in parts of the U.S. The 7-day average of new daily cases decreased 11.9% from the previous week. Get vaccinated. If you’re not fully vaccinated, continue practicing healthy habits. More: https://t.co/gp6X4zTnBT. pic.twitter.com/fEsElvHZJf

​According to Rochelle Walensky, the director of the Centers for Disease Control and Prevention, vaccination rates in each community need to be boosted swiftly to reach 70 percent to cut chains of virus transmission.

Walensky is cited as warning that coronavirus mutations "are a wildcard that could reverse this progress we have made and could set us back".

However, there are growing doubts that the 70 percent target will be reached. While approximately 45 percent of all Americans have received at least one vaccine dose, the figure cited for Alabama is just 33 percent - one of the lowest vaccination rates in the country.

Cases there have increased slightly over the last month, with public health officials worried it’s only a matter of time before some dangerous evolved mutation emerges.

“It’s a very real threat,” said Jeanne Marrazzo, director of the infectious disease division at the University of Alabama, Birmingham. “If you have a population that is not well-vaccinated and you combine that with a lot of activity likely to spread the virus — where things could take off.”

Mississippi and Louisiana are estimated to have roughly the same vaccine rates as Alabama. Data for Arkansas, Georgia, Idaho, Tennessee and Wyoming is only marginally better, with COVID-19 case counts having plateaued in those states.

​The dramatic decline in jab demand is reported to have caught both state and federal officials unawares.

Fewer than 1.1 million Americans are receiving a first dose daily - the lowest average since the end of February, according to the Centers for Disease Control and Prevention (CDC), as compared to the nearly 2 million each day registered three weeks earlier.

As the world struggles to contain the spread of the COVID-19 pandemic, rolling out testing and inoculation with a plethora of already available vaccines, the SARS-CoV-2 virus that causes the respiratory disease has already evolved several mutations. They differ from the original virus strain in several key ways.

Dubbed "variants of concern" by the World Health Organisation, they have triggered fears they might be more contagious, more challenging to detect or treat, and evade the body's immune response.

One way of warding off a potential “doomsday scenario” is by carrying out sequencing of the virus to detect mutations. However, according to reports, the sequencing done in the US is still below a level that could offer reliable guarantees that it would provide substantial early warning.

All three vaccines authorised for use in America appear to be relatively effective against the known coronavirus variants. However, that is not enough to allay concerns.

“Every successive transmission is an opportunity for a new variant to emerge. We have been quite fortunate that the variants that have emerged remain fairly good matches to the vaccines we have. We are not guaranteed to be so fortunate in the future,” said Joseph Kanter, Louisiana’s state health officer.

The highly contagious variant B.1.1.7, first identified in south-east England and reported to the World Health Organisation (WHO) on 14 December 2020, is currently believed to be the dominant strain in the US.
Subsequently identified in 114 countries worldwide, it has been blamed for soaring hospitalisations among younger people.

Other coronavirus variants, that originated in particularly pandemic –hit places like New York, California and India have also been identified.

“Every time there is a new variant, there is a nervous question we ask: 'Is this the doomsday scenario?'" Shereef Elnahal, CEO of University Hospital in Newark, N.J., was quoted as saying.

Anthony Fauci, White House chief medical adviser, sought to allay fears on Wednesday, telling the outlet that the risk of treacherous coronavirus variants may be diminished due to the recent pace of vaccinations.

© AFP 2021 / SAUL LOEB
White House Chief Medical Adviser on Covid-19 Dr. Anthony Fauci listens as US President Joe Biden (out of frame) speaks about the 50 million doses of the Covid-19 vaccine shot administered in the US during an event commemorating the milestone in the Eisenhower Executive Office Building in Washington, DC, February 25, 2021.

“If an overwhelming portion of the population is vaccinated, it’s unlikely you’ll see the kind of surge like we saw in January. That’s why it’s important to get to that end game,” he was quoted as saying.

Some of the states that are principally struggling to vaccinate are already challenged by various pervasive poor public health outcomes. This is particularly true of rural communities with “spotty” health infrastructure, where lower-income residents struggle to get access to a medical provider.

The administration of President Joe Biden is employing diverse measures to grapple with the “pockets” of the country with high coronavirus caseloads and low vaccination rates.

As the recent coronavirus case surge in Michigan showed, federal authorities stepped in to aid with sequencing, testing, tracing and treatment to quell the outbreak.

$3 billion is being funnelled by the CDC to help local officials expand their vaccine programs. $1.7 billion will be channelled by the government towards increasing sequencing capacity in the coming months, helping the CDC, state labs and academic researchers.

NE US states like NJ saw a bump in cases & hospitalizations, but deaths kept declining. pic.twitter.com/etFIwxkNmM

​There is now an increased pivot away from mass vaccination sites to using refrigerated vans, community health clinics and door-to-door campaigns in rural communities. Localities are being urged to establish walk-up sites, in an effort to make vaccinations more convenient.

“Our biggest threat to progress would be a variant that was capable of eluding the therapeutics and vaccines that we currently have. That's why I feel like we have to be so vigilant,” Sen. Tammy Baldwin (D-Wis.) was quoted as saying.