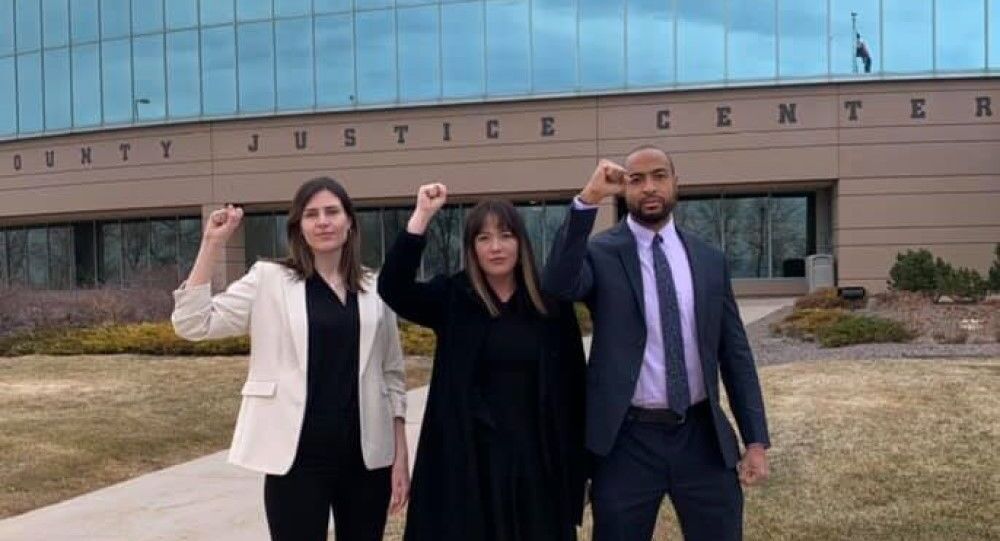 Amid the nationwide protests against police brutality and anti-black racism last summer, more than 10,000 protesters were arrested in less than two weeks and thousands more were injured by batons, tear gas, and less-than-lethal ammunition deployed against them as well as journalists covering the demonstrations.

Four anti-racist activists in Denver, Colorado, have had a slew of felony charges against them dropped on Thursday. The activists had potentially faced decades in prison after being accused of fomenting a riot in a 2020 protest that surrounded an area police precinct.

At a Thursday hearing, Adams County District Attorney Brian Mason moved to dismiss all remaining charges his office had brought against Lillian House, Joel Northam, Eliza Lucero, and Terrance Roberts, including both felonies and misdemeanors. According to a press release by the National Committee for Justice in Denver (NCJD) solidarity group, Mason said he has “an ethical obligation to only proceed on charges [his] office can prove and to dismiss charges that [they] cannot prove.”

“We are very glad to see earnest steps toward justice from both new district attorneys presiding over this case,” the NCJD said in a Thursday statement. “We continue to call on District Attorney John Kellner to end the prosecution in total and drop all remaining charges, which currently include a total of twelve misdemeanors and low-level offenses against Joel Northam, Lillian House, and Terrance Roberts.”

“As we have stated previously, not a single charge would have been filed were it not part of a broad and punitive attack initiated by the prior administrations against protest leaders who challenged the impunity of the police. Continuing to put these peaceful protesters through a grueling court process on charges representing the remnants of this case is not justice”, the statement read.

The ground was laid for Mason’s decision during a preliminary hearing in March, when Adams County Judge Leroy Kirby decided to drop the first-degree kidnapping charges against the protesters, calling them “a bridge too far.” The slew of charges against the four, plus another whose charges had already been dropped, stemmed from a July 3 protest at an Aurora Police Department precinct in which hundreds of demonstrators surrounded the station for several hours before leaving in the early hours of the morning. Police had argued the protest amounted to the kidnapping of the 18 officers inside the station, but lawyers for the defense successfully demonstrated the officers were free to leave and that the crowd dispersed when ordered to.

The NCJD has claimed the five were targeted by police for revenge after organizing the July 3 protest and several others over the course of the summer demanding accountability for the August 30, 2019, death of Elijah McClain, a 23-year-old black man who died after being stopped by APD officers while walking home from the store. Four of the activists are members of the Party for Socialism and Liberation, a revolutionary Marxist party that worked with community members to help put a nationwide spotlight on McClain’s case by organizing the largest protests in Aurora’s history.

The three officers who tackled McClain that night, putting him in a headlock until he fell unconscious, then telling medics to give him a fatal dose of ketamine to calm him down, have not been charged in McClain’s death. A subsequent police investigation exonerated the three - Nathan Woodyard, Jason Rosenblatt and Randy Roedema - of wrongdoing, but a separate probe funded by the Aurora city government found catastrophic faults with both their actions and the internal police probe.

After McClain’s death, community members began building a movement to demand justice and hold the officers accountable, including other members of the same force who were caught mocking McClain’s death in photos leaked on social media and were subsequently fired. Family and friends of McClain vouched for his gentle nature, noting he was neither as big or as violent as police claimed him to be. They fault racist perceptions of Black men for both the police stop and the violent incident that led to his death. Their protests shut down highways and rallied thousands in the Denver area.

Police arrested the five activists in a series of surprise raids on September 17, 2020, that included a SWAT team and armored vehicle sent to Northam’s home and swarms of cop cars descending on the others while they were jogging or performing errands. The activists said they were not even aware warrants had been posted for their arrest. They were then kept in a COVID-infested jail for eight days, well beyond the two-day standard maximum period by which a bail hearing is required to be held. Independent news outlet BreakThrough News has created a short documentary about their arrests and charges and the Justice for Elijah McClain movement.