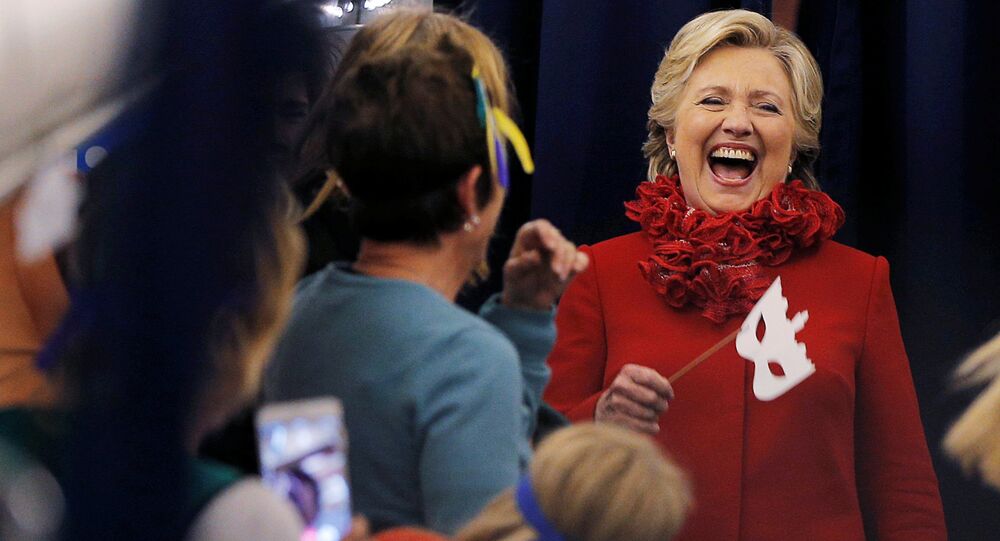 The former first lady and senator from New York blew two chances at the presidency, the first time in 2008, when Barack Obama was nominated as the candidate from her party, and then in 2016, when first-time candidate and billionaire real estate mogul Donald Trump threw his "Make America Great Again" hat into the race.

Hillary Clinton has stepped up her battle against opposing viewpoints online, suggesting that a “global reckoning” is required to purge the internet of “misinformation” which may “threaten” Western democracy.

In an interview with The Guardian, Clinton suggested that the big tech and social media giants who now play a major role in shaping voters’ views have “got to rid themselves of both-sidesism,” suggesting that it's “not the same to say something critical of somebody on the other side of the aisle and to instigate an attack on the Capitol and to vote against certifying the election.”

“Those are not comparable, and it goes back to the problem of the press actually coming to grips with how out of bounds and dangerous the new political philosophy on the right happens to be,” Clinton added, referring to the widely popular theory among many Republicans that Donald Trump was robbed of a second term as a result of Democratic fraud in key swing states in the 2020 election.

“The technology platforms are so much more powerful than any organ of the so-called mainstream press, and I do think that there has to be not just an American reckoning but a global reckoning with the disinformation, with the monopolistic power and control, with the lack of accountability that the platforms currently enjoy,” the twice-failed presidential candidate added.

© Photo : YouTube/ Westchester Digital Summit
Maxwell Tricked Into Apparently Admitting Epstein's Tapes of Trump, Clintons Do Exist, Book Claims
Clinton went on to suggest that Facebook “in particular” had “the worst track record for enabling mistruths,” from misinformation and extremism to conspiracy theories. “Governments are going to have to decide right now that the platforms have to be held to some kind of standard, and it’s tricky,” she said, without elaborating on what steps need to be taken.

Online heavyweights Twitter, Facebook, Apple, and Google took action to ban Donald Trump from their services in the wake of the 6 January Capitol riots after accusing him of provoking an insurrection. Before the ban, Trump sought to pressure Congress to strip big tech of immunity from liability provided under the 1996 Communications Decency Act, accusing them of banning, manipulating, or otherwise silencing conservative politicians and viewpoints. The president received support for the initiative from former Democratic congresswoman Tulsi Gabbard, but the proposal appears to have died on the vine after he left the White House in January.

In her interview, Clinton attacked Trump at length, suggesting that he had “essentially aligned himself with authoritarian thinking” and accusing him of “damaging” America by feeding “paranoia, conspiracy theories, partisan differences in our own political system that led many people to claim that the press was the enemy of the people, or at least the enemy of what they believed in.”

The former first lady didn't touch on the US mainstream media’s responsibility for the evidence-free conspiracy theory about Trump being a Russian agent, even though that allegation haunted the Republican throughout his presidency, even after Mueller report cleared his name in 2019.

Clinton did praise the mainstream media’s eventual shadow-banning of Trump and his followers, saying she understood “the challenge that they faced,” and that Trump’s views were not just “an ordinary difference of opinion,” but a “wholesale jettisoning of what we had come to understand as being appropriate boundaries for our leaders to operate within.”

© AP Photo / Alex Brandon
Here We Go Again: Hillary Clinton, Pelosi Allege Trump Orchestrated Capitol Riot on Putin's Orders
Hillary Clinton has spent the last half-decade accusing Trump of being a Russian agent, and has even attacked fellow Democrats such as Gabbard, and former Green Party presidential candidate Jill Stein for being “Russian assets” being “groomed” by Republicans. She went on to agree with sentiment expressed by Howard Stern that even her 2016 Democratic rival Bernie Sanders was backed by “the Russians” seeking her defeat.
...
Reddit
Google+
Blogger
Pinterest
StumbleUpon
Telegram
WhatsApp
09

Hillary Clinton Gives Biden 'A' for Effort, Says He Is 'Less Constrained' Than Predecessors