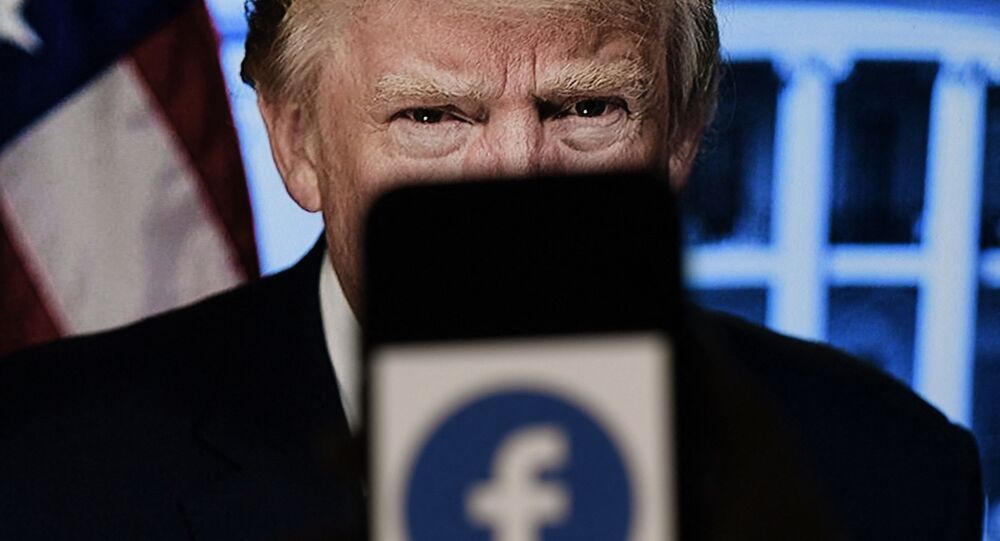 Facebook's independent Oversight Board earlier upheld its move on 7 January to restrict then-President Donald Trump’s account in the aftermath of the 6 January Capitol riot, according to a statement issued on Wednesday. However, it urged the social media giant to review its indefinite suspension decision and work out a “proportionate response."

Representatives of a broad swathe of politicians in Washington have weighed in on the decision of the Facebook Oversight Board on Wednesday to uphold its move to suspend then-President Donald Trump’s account on 7 January 2021.

The announcement has left the company fending off fresh attacks by both Republicans and Democrats, while tech critics have slammed the Oversight Board itself as a “sideshow.”

On 5 May, Facebook's Oversight Board declared its final verdict regarding the platform's move to indefinitely suspend Trump's account, initially done in the aftermath of 6 January Capitol riot.

The board upheld its decision, claiming Trump's posts on 6 January, both on Facebook and Instagram, breached the platforms' regulations related to glorifying and encouraging violence.

The Board has upheld Facebook’s decision on January 7 to suspend then-President Trump from Facebook and Instagram. Trump’s posts during the Capitol riot severely violated Facebook’s rules and encouraged and legitimized violence. https://t.co/veRvWpeyCi

​However, the board also found Facebook's move was below the company's standard, and the "indefinite" suspension was an inadequate response, since it is not defined in the company's policies.

The Board also found Facebook violated its own rules by imposing a suspension that was ‘indefinite.’ This penalty is not described in Facebook’s content policies. It has no clear criteria and gives Facebook total discretion on when to impose or lift it.

​The board established a six month deadline for the social media giant to “reexamine the arbitrary penalty."

“… It must also be consistent with Facebook’s rules for severe violations, which must, in turn, be clear, necessary and proportionate," the board warned.

In a press release, Facebook stated that it would determine a clear and proportionate action, while Trump’s accounts remain suspended.

After the board issued its ruling, Republicans responded by urging congressional action in the face of the social media platform’s lack of transparency and consistency in its decision-making. They reiterated criticism of Facebook's unbridled power as “unacceptable."

The recent move was denounced as underscoring the need for Congress to “step up our work to bring much-needed reform and oversight to Big Tech” by House Energy and Commerce Committee ranking member Cathy McMorris Rodgers (R-Wash.).

A top Republican on the House of Representatives antitrust subcommittee, Ken Buck (R-Colo.), called for “aggressive antitrust reform to break up Facebook’s monopoly."

Facebook’s status as a monopoly has led its leaders to believe it can silence and censor Americans' speech with no repercussions.

Now more than ever we need aggressive antitrust reform to break up Facebook’s monopoly. pic.twitter.com/WFPEe8aXsS

“It is time that we break up big tech, not just regulate them,” Trump’s former chief of staff Mark Meadows was quoted as saying by Fox News.

Sen. Roger Wicker (R-Miss.), ranking member of the Senate Commerce Committee, issued a statement on the decision, emphasising that the announcement by the board offered yet another reason for Congress to act on Big Tech’s influence.

“This decision further illustrates the concentrated control Big Tech exerts over speech and why Congress should act to curb its dominance. Justice [Clarence] Thomas’s recent opinion suggesting that powerful online platforms should be treated as common carriers offers a sound basis for legislation that would bring accountability to this industry. I will continue working with my colleagues to protect speech and the diversity of viewpoints online.”

Democrats were just as quick to condemn the decision of the Oversight Board, urging federal regulation to stanch the unchecked spread of disinformation on the social network.

The board was also slammed for ignoring the role Facebook plays in “amplifying disinformation” by Energy and Commerce Committee chairman Frank Pallone (D-N.J.).

Every day, Facebook is amplifying and promoting disinformation and misinformation, and the structure and rules governing its oversight board generally seem to ignore this disturbing reality. It’s clear that real accountability will only come with legislative action.

“It’s clear that real accountability will only come with legislative action,” he stated on Twitter.

House Consumer Protection Subcommittee Chairwoman Jan Schakowsky (D-Ill.) was cited by Axios as dismissing the ruling as a "distraction by Facebook to deflect responsibility."

The Oversight Board's decision was condemned by Sen. Richard Blumenthal (D-Conn.) as one that “upholds a minimal marker for truth and decency.”

The board itself has been called a “distraction” by a growing chorus of Big Tech critics.

Its decision-taking process was also decried as an "illegitimate and anti-democratic circus...that highlights the need for structural and regulatory change" by Rashad Robinson, president of Colour of Change, a leading racial justice organisation, which has consistently criticised Facebook over its policies.

"Donald Trump should have been permanently banned from Facebook a long time ago. What people need to understand now is that the Oversight Board, which has still left the door open on this issue, is not the cure for what ails us on social media,” said Jim Steyer, CEO of Common Sense Media.

"We need to remove the immunity shield that currently exists for those companies and that Facebook is hiding behind"@jimsteyer @CommonSense #RFOBresponds pic.twitter.com/4xNfGKt7RS

Twitter was the first social media platform to permanently ban Trump in the aftermath of the US Capitol riots on 6 January, which critics blamed on the 45th POTUS.

Trump was banned from Instagram and its umbrella company, Facebook on 6 January, initially for 24 hours, after sharing a video calling on his supporters who had breached the Capitol building to go home.

On 7 January, platform CEO Mark Zuckerberg announced that Trump’s Facebook and Instagram accounts would be suspended at least until the inauguration of US President Joe Biden on 20 January, remarking that Trump "intends to use his remaining time in office to undermine the peaceful and lawful transition of power."

Facebook had subsequently referred the issue to its independent Oversight Board to evaluate the decision.