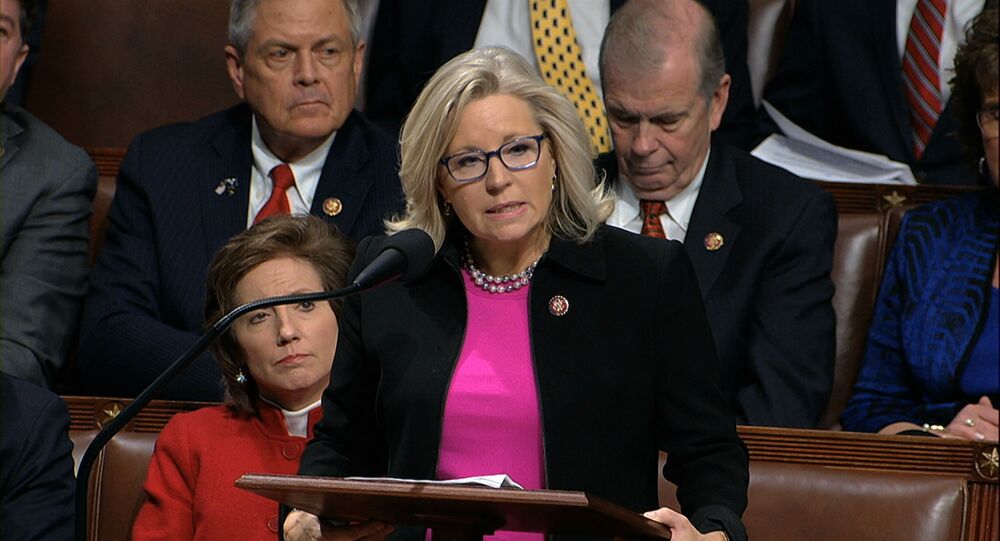 On the same day, Trump predicted Cheney's failure to be re-elected for a new term in the House following her decision to vote in favour of impeaching the then US president.

House Minority Whip Steve Scalise will support fellow lawmaker Elise Stefanik in her bid to oust Liz Cheney, the current chair of the House Republican Conference, a caucus uniting all GOP members of the lower chamber of Congress, Scalise's spokesperson revealed. Donald Trump on the same day announced his support for Stefanik's candidacy to replace the GOP congresswoman in the prominent party post.

While Scalise is not the first Republican to support the initiative to oust Cheney from the prominent post in the party, unlike others, he did not directly link the effort with the congresswoman's decision to vote against Trump in the latter's second impeachment.

"House Republicans need to be solely focused on taking back the House in 2022 and fighting against Speaker Pelosi and President Biden's radical socialist agenda, and Elise Stefanik is strongly committed to doing that, which is why Whip Scalise has pledged to support her for Conference Chair", Scalise's spokesperson said.

The vote (the second this year) to oust Cheney from the post is scheduled to take place on 12 May. Her opponents will have to amass 2/3 of all caucus votes to replace her. Apart from Stefanik, who enjoys support from the party's House whip, Ann Wagner and Jackie Walorski reportedly also seek to replace Cheney.

In April, Jim Banks, the leader of the Republican Study Committee, the largest conservative caucus in the House, suggested in an interview with Axios that Liz Cheney might lose her post as the head of one of the most powerful GOP bodies within a month. House Republican Leader Kevin McCarthy was caught on a hot mic complaining about Cheney, saying he "has had it" with Cheney's actions and that he had lost confidence in her.

The shaky position of the congresswoman within her own party stems from her decision to back a bill by the Democrats to impeach Donald Trump a second time over allegations of his involvement in triggering the deadly 6 January Capitol riot – something that the former president denies. Trump has repeatedly lashed out at Cheney over her decision, and promised to make sure she and other GOP lawmakers who voted against him are not re-elected in their states and districts.

"Warmonger Liz Cheney, who has virtually no support left in the Great State of Wyoming, continues to unknowingly and foolishly say that there was no election fraud in the 2020 presidential election when in fact, the evidence, including no legislative approvals as demanded by the US Constitution, shows the exact opposite", Trump said on his new online platform to address supporters. In his post, the ex-president refers to earlier claims of election fraud in 2020, which his legal team failed to prove in numerous courts.