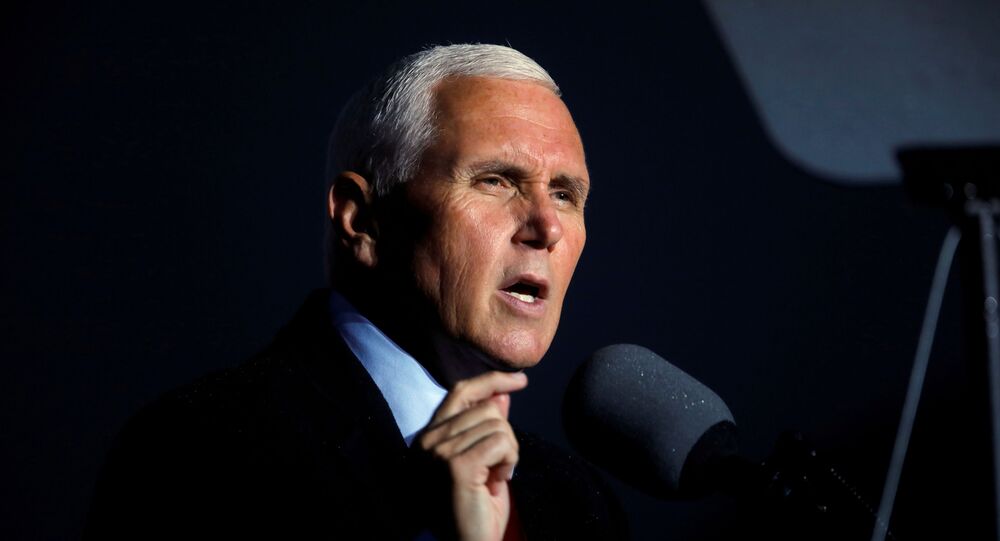 Former Vice President Mike Pence has been seen as laying the groundwork for a potential run for the White House in 2024, as he reenters public life, launching an advocacy group to “build on the success of Donald Trump’s administration”, and signing a two-book deal with publishers Simon & Schuster for his autobiography, due in 2023.

Former Vice President Mike Pence touted what he said he and former POTUS Donald Trump were able to accomplish during their four years in office as he headlined an event on 29 April in Columbia, South Carolina, hosted by the Palmetto Family Council, a South Carolina social conservative Christian group.

​In his first public speech since leaving office, which, incidentally, coincided with President Joe Biden’s 100th day in office, he decried the Biden administration’s “far-left agenda”.

​“But how times have changed. In just 100 days, the Biden-Harris administration has launched an avalanche of liberal policies that threaten to derail all the progress that we made.”

Mike Pence slammed a spate of policy moves carried out by the Biden-Harris administration.

These include abolishing the 1776 commission - an advisory committee established in 2020 by Trump to support what he called "patriotic education”; authorised teaching Critical Race Theory in federal agencies and public schools, and a proposed reversal of the Trump-era family planning policy that stripped federal funds from clinics that refer patients for abortions, in a move that led Planned Parenthood to withdraw from the programme known as Title X.

They abolished the 1776 commission aimed at promoting patriotism in American education, they authorised teaching Critical Race Theory in federal agencies and public schools, and they restored Title 10 funding to Planned Parenthood.

Had enough? I have.

Mike Pence, who was the 50th governor of Indiana from 2013 to 2017, went on to underscore a plethora of achievements of Trump’s tenure, such as a succession of conservative judicial appointments, the Operation Warp Speed vaccine programme, and foreign policy achievements like the Abraham Accords.

Summing up his stint in office alongside Donald Trump, he said:

​As he firmly aligned himself with the 45th President of the United States, he stated that serving alongside Trump had been “the greatest honour of my life”.

While Pence stopped short of saying whether he would run for president in 2024, the appearance of the ex-Vice President at a gathering in South Carolina, a state that holds the first presidential primaries in the South, is seen as laying down a marker for a potential return to office.

Pence hinted to the crowd that he would be “pushing back on the liberal agenda” which he denounced as wrong for the country.

“We’ve got to guard our values ... by offering a positive agenda to the American people, grounded in our highest ideals. Now, over the coming months, I’ll have more to say about all of that.”

Ahead of the Thursday event, South Carolina Democratic Chair Trav Robertson was cited by Fox News as saying Pence was arriving to the state to “try and salvage his relationship” with Trump supporters, who had been peeved that the Vice President failed to support efforts to block certification of the 2020 presidential election, which Trump had insisted was “rigged” to favour his opponent – Democrat Joe Biden.

Former President Donald Trump himself has also failed to offer any explicit plans regarding a run for the White House in 2024, but has teased the possibility on several occasions.

When asked earlier on Thursday on Fox Business about running in 2024, Trump responded that he was “100 percent” thinking about it and might possibly consider Florida Gov. Ron DeSantis as his running mate.
A March poll of Republican voters found that DeSantis and Pence were tied for the 2024 GOP nomination, in the event that Donald Trump opted out of the race.

Since leaving office, Mike Pence has been ramping up speaking engagements around the country, working with the Heritage Foundation and Young America’s Foundation.

He also launched a political advocacy group to “build on the success” of Trump’s administration.

In their first 100 days in office, the Biden-Harris administration has unleashed a border crisis unlike anything we’ve ever seen, are pushing an “infrastructure plan” that has little to do with actual infrastructure, and are stripping away our freedoms.

“Advancing American Freedom” aims to “promote the pro-freedom policies of the last four years that created unprecedented prosperity at home and restored respect for America abroad, to defend those policies from liberal attacks and media distortions, and to prevent the radical Left from enacting its policy agenda that would threaten America’s freedoms,” according to a statement.

Furthermore, publisher Simon & Schuster announced in April that it had landed a two-book deal with Pence. The first book, an autobiography, is expected to come out in 2023.