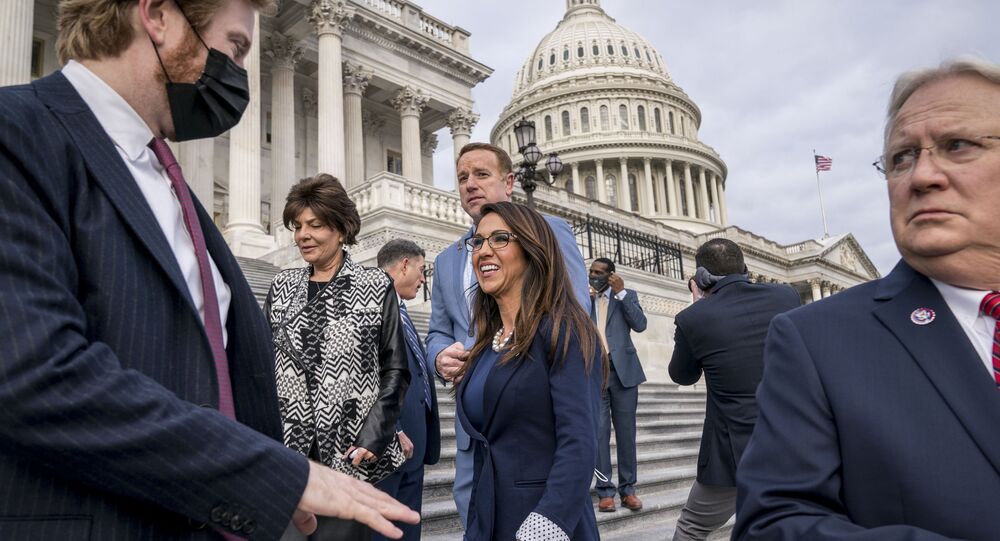 Republican congresswoman Lauren Boebert brought a first aid thermal blanket, similar to those distributed to migrants held at detention facilities at the southern border, to cover her lap during US President Joe Biden’s address to Congress on Wednesday.

Boebert’s spokesperson clarified that the congresswoman was attempting to draw attention to the recent migrant surge on the US southern border, since Biden, according to her, failed to do so in his speech.

"President Biden did not address or bring attention to the crisis at our southern border. So Rep. Boebert did," the spokesperson said.

In addition to her nonverbal statement during Biden’s address, Boebert made nearly thirty tweets, picking apart the president’s speech in real-time.

What I want to hear in Biden’s speech is how to solve the border crisis.

What I will hear are plans to spend trillions of dollars and raise taxes.

What I don’t want to hear are disingenuous calls for unity from this authoritarian leader and his radical administration.

Where is @POTUS’s plan to secure the border, open our schools, and open America?

Biden still hasn’t mentioned the crisis he created at our southern border.

The border is a war zone.

This is not the first time the new Republican Colorado representative has drawn attention to her policies in such an unconventional way. Boebert, a gun rights activist, has previously faced backlash regarding her position on firearms after she released an ad last month stating she will be carrying her personal weapon in Congress.

© AP Photo / Christian Chavez
US Gov't Reportedly Plans to Release More Migrants Into Country Amid Exhaustion of Border Personnel
US President Joe Biden in his first speech to Congress vowed to challenge China, Russia, and other "rivals" on security matters, outlined his jobs plan to revive the American economy, and called on lawmakers to pass gun control, police, and immigration reform legislation.

During the address, Biden mentioned a “war over immigration”, telling Congress to pass his comprehensive immigration reform legislation.

“If you actually want to solve the problem - I have sent you a bill, now pass it,” he said.

US government data showed that US southern border apprehensions soared by more than 70 percent in March. There were 172,331 migrant encounters recorded, which is the highest monthly total in more than two decades, with the Biden administration on pace to top the previous annual record set in 2019 of over 977,000 apprehensions.