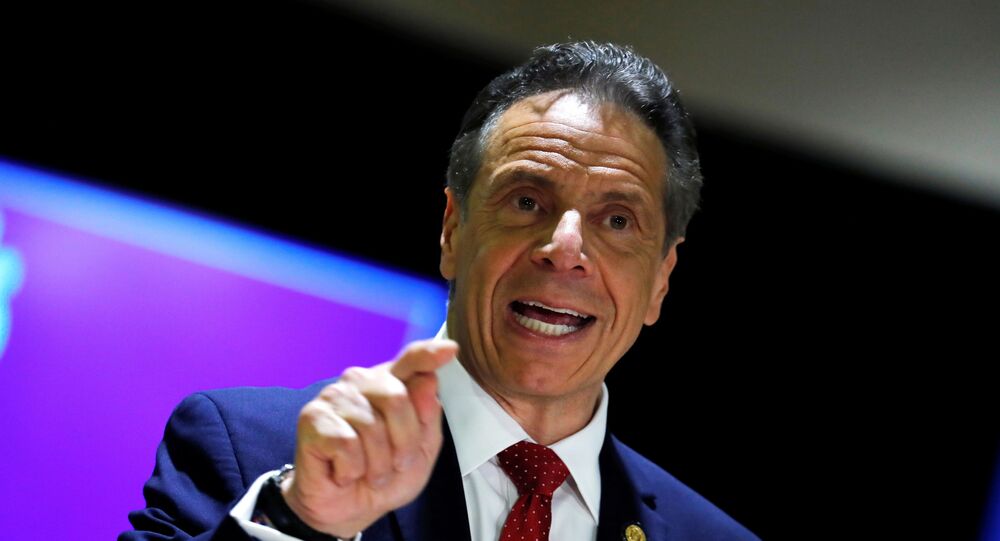 Cuomo has avoided questions about the ongoing inquiries into his alleged sexual misconduct and the purported cover-up of numerous deaths in the state's nursing homes related to COVID-19. The governor's press events have previously been closed to press attendance due to the coronavirus limitations.

In his first live press conference in months, New York Governor Andrew Cuomo categorically refuted all the accusations made against him since December and blamed former President Trump's politics for the federal inquiry into his handling of the COVID-19 nursing-home deaths, Bloomberg reported on Monday.

According to a report by the New York Post, Cuomo went on to say that the controversy is "just more of the ugly politics of the day," blaming Trump among others for making it "a very big issue."

Cuomo, however, addressed some of the scandals threatening his future in office at a news conference in Syracuse, and reiterated that he would not resign, despite calls from several politicians, including some fellow Democrats and other public figures to do so.

The governor stated that investigations into allegations of sexual harassment against him will find no evidence of wrongdoing because he "didn't do anything wrong."

"The report can’t say anything different because I didn’t do anything wrong," he said when asked whether he would consider resigning if the allegations are true.

Facing direct questions from reporters about the specific allegations made against him, Cuomo strongly denied any wrongdoing in each case.

“To put it very simply, no,” Cuomo said when asked whether he did any of the things he was accused of.

“All the groping, the sexual harassment, you deny all of that?” the New York Times reporter Jesse McKinley asked the governor in a follow-up question, to which Cuomo said: "That’s right. Yes."

According to the report, Cuomo was only asked a few questions about the subject of his press conference, which was an announcement that the State Fair would reopen this year after being closed due to the novel coronavirus in 2020. The governor also mentioned increased stadium, gym, and office capacity, as well as lower COVID-19 hospitalizations and positive-test rates.

Cuomo invited a group of journalists to question him in person for the first time since the sexual misconduct allegations emerged in December.

© AP Photo / Mark Lennihan
Cuomo's 'NY Tough' Slogan on Albany Skyscraper Turns Into 'NY Touch' in Apparent Shot at NY Governor
Cuomo is being investigated by the federal government over the state's oversight of nursing home deaths. Critics claim that his administration forced nursing homes to admit COVID-19-infected patients and undercounted their deaths to make the state appear better.

Cuomo had previously apologized for not disclosing further information about nursing home deaths earlier, claiming that a lack of accountability had created a "void" that had been filled with false information.

Moreover, several current and former state employees, as well as other women, have accused the governor of making unwelcome sexual advances, kissing them or touching them inappropriately. Cuomo attributed his proclivity for touching and kissing people to his Italian-American ancestry.

However, he had also previously admitted to cracking jokes at work and apologized if anyone was offended.

Cuomo has asked the public to wait for the outcome of inquiries by Attorney General Letitia James and the state Assembly's judiciary committee, which is looking at whether he should be impeached.