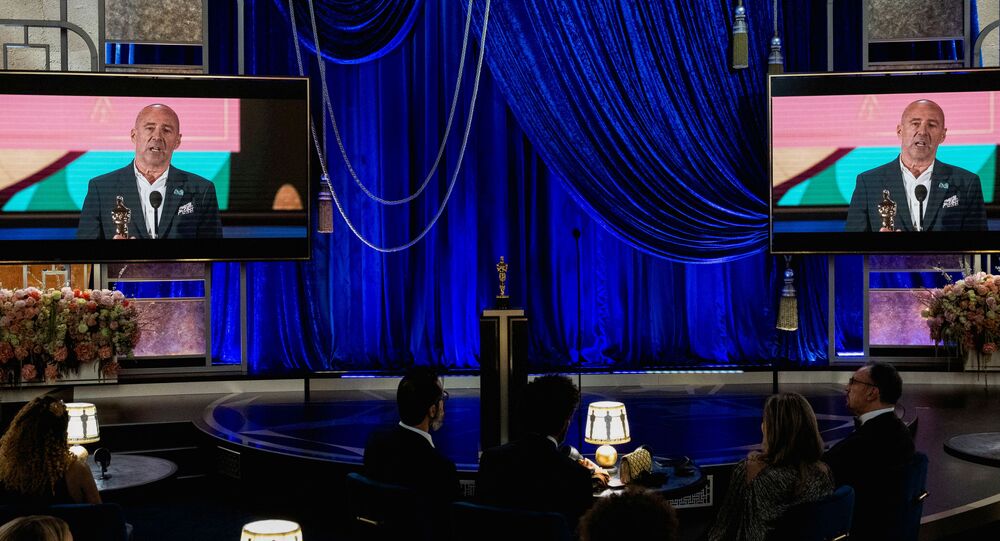 The former Daily Mirror editor — who was sacked by ITV for his criticism of US actress-turned-princess Meghan Markle — said the odd choice of Los Angeles Union Station as the venue for the 93rd Academy Awards was ironically apt for the "grim, soulless three-hour ordeal".

Only a handful of guests were present for Sunday night's 'socially-distanced' event, with winners of many of the awards appearing by video link, with no clips of the nominated films being played.

Renowned British actor Sir Anthony Hopkins was not even present to collect the Best Actor award he won for his role in The Father, with his agent revealing the 83-year-old was asleep at his home in Wales during the ceremony. Hopkins later posted an acceptance speech on Instagram.

"The fact Sir Anthony refused to have anything to do with last night's grotesque farce just makes me respect him even more," Morgan wrote.

© REUTERS / Chris Pizzello/Pool
It's Showtime: Celebrating The Best Moments From 2021's Oscars
20
In a change of running-order, the Best Actor award was presented last — a spot traditionally held by Best Picture. Black Panther star Chadwick Boseman, who died of cancer in 2020, had been widely-expected to take the prize in the most-diverse Oscars yet for his performance in Ma Rainey's Black Bottom — which as a semi-musical period drama dealing with the social issue of racism was prime 'Oscar bait'. The film only garnered the Best Makeup and Hairstyling and Best Costume Design Oscars.

Morgan also criticised the "woefully lame" decision not to book a host for the event, "made even more irksome by Ricky Gervais re-tweeting his brilliantly acerbic 2020 Golden Globes monologue."

​Gervais' sardonic brand of humour was "now a crime in liberal-fascist woke-ravaged America punishable by cancellation from all future awards shows," Morgan wrote.

The British comedian's jibe last year that "no-one cares about movies any more" and "this show should just be me coming out, going 'well done Netflix, you win, everything' but no, we've got to drag it out for three hours" proved prescient. Seven Oscars went to films produced by the streaming service, while much of 2020's crop of films did not even see theatrical release thanks to the coronavirus lockdown.

"The tragic truth is that the Oscars as we know it died last night — woked to death by a craven collective desire from those involved to preach not entertain, to lecture rather than make us laugh, and to virtue-signal instead of perform," Morgan lamented.

'Fine as F**k': Brad Pitt Steals Hearts of Netizens With His Man Bun at 2021 Oscars