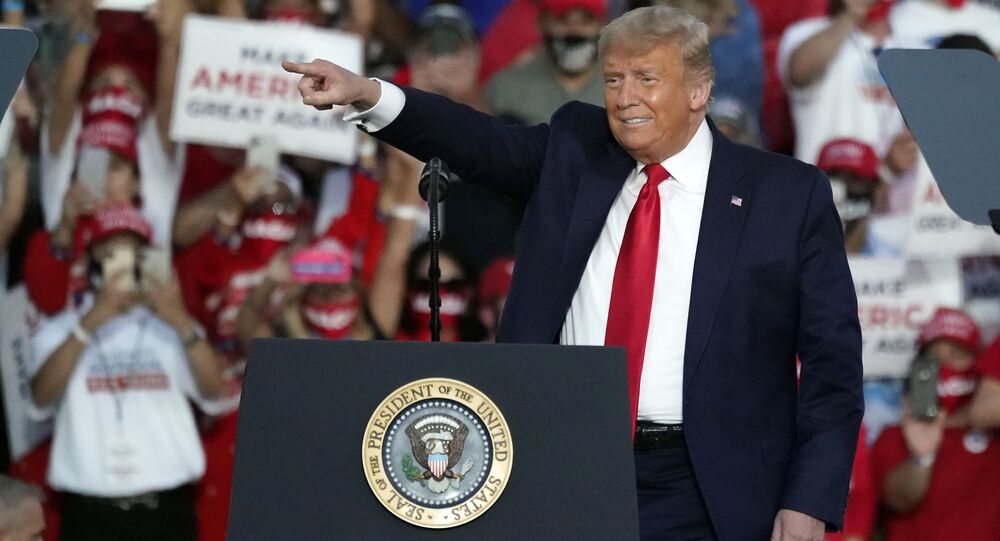 Albuquerque's authorities reportedly billed the Trump campaign for the extra police coverage, road barricading, and paid leave for employees whose shifts were slashed by a few hours during the 16-17 September shutdown of the city.

City officials in Albuquerque, New Mexico, have sent a $211,175.94 bill incurred by former President Donald Trump's campaign in 2019 to the ex-POTUS' Mar-a-Lago resort in Florida, the Albuquerque Journal reports.

A city spokesperson told the news outlet that the bill had been resent to Mar-a-Lago after it was initially submitted to Donald J. Trump for President, Inc. in New York a couple of years ago, but to no avail.

At the time, Albuquerque Mayor Tim Keller, who is member of the Democratic Party, said the former US president's campaign stop in the area "cost taxpayers hundreds of thousands of dollars, including over 1,500 hours of police overtime that was required by the campaign".

The ex-POTUS stayed overnight in Albuquerque for a 16 September 2019 campaign rally in the nearby city of Rio Rancho.

Trump spokesperson Jason Miller, for his part, denied the Trump campaign owes the city the sum, also demanding that the Albuquerque Journal scrap its story.

"The Trump campaign does not owe any money here and this story should be retracted immediately. Security matters for a president are resolved by contacting the Secret Service, not whining" to the Albuquerque Journal, Miller tweeted on Saturday.

© AP Photo / Evan Vucci
Trump’s 2020 Campaign App Scrubbed From Google Play Store for ‘Dysfunction’, Sparking Speculations
The tweet came after Keller said in an interview with the talk and news satire television programme "Daily Show" that Albuquerque had hired a collections agency to pursue the bill.

He noted that Trump "should be getting these annoying voicemails that, like, we get usually from scam companies where it's like 'You owe debts'", adding, "I think Mar-a-Lago is now getting those calls".

The Albuquerque mayor then went further by claiming that Trump owes the city "more because there was about a day and a half where we couldn't even function as a city".