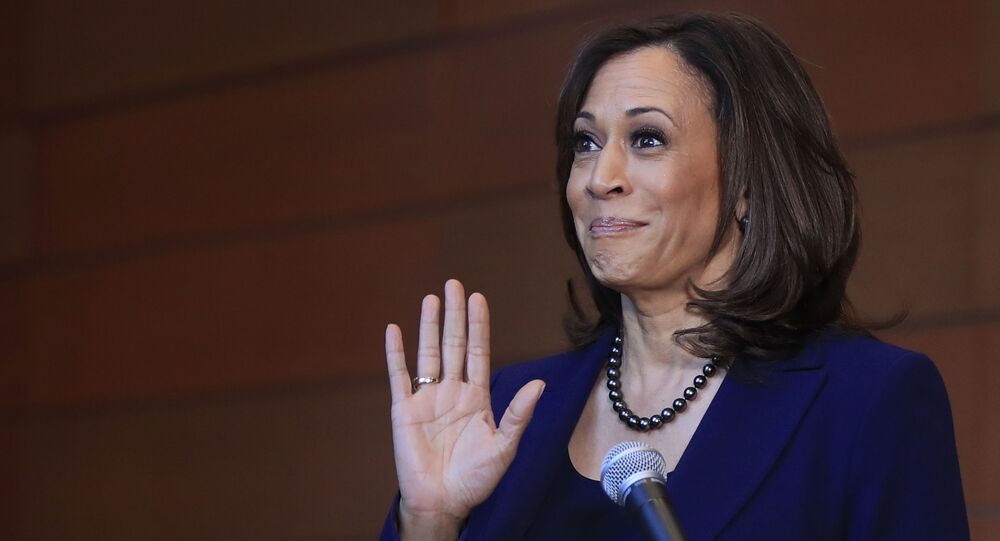 Kamala Harris has repeatedly been critisised for failing to visit the US southern border as President Joe Biden's point person to lead the White House's efforts to tackle the migration crisis.

A group of protesters in New Hampshire has urged Vice President Kamala Harris to grapple with migration-related issues as she visited the Granite State to promote the Biden administration's hefty infrastructure proposal.

On Friday, demonstrators in the town of Plymouth called on Harris to visit the US-Mexico border as President Joe Biden's point person to tackle the migration crisis.

The rally came as the New Hampshire Republican Party (NHGOP) tweeted that "as you [Kamala Harris] travel over 2,300 miles away from El Paso, our country would be better served with an official visit to our southern border, not a campaign trip for [Democratic Senator] Maggie Hassan".

© East News / Eduardo Verdugo/AP/MXEV115
Immigrants walk along the rail tracks after getting off a train during their journey toward the US-Mexico border in Ixtepec, southern Mexico

This was echoed by NHGOP chairman Stephen Stepanek, who stated that Harris last visited New Hampshire in 2019, pledging supporters that "she was committed to fixing the 'inhumane' activities towards our country's southern border".

"Now Harris returns almost two years later, but how will she answer to these same individuals, while blatantly ignoring the crisis she's been specifically charged to handle? Granite Staters don't want another photo-op, they want strong leadership and accountability. Her event in Plymouth is about 100 miles away from our northern border and a staggering 2,355 miles from the worsening crisis in El Paso, Texas", Stepanek added.

Neither Harris nor Biden have made a trip to the southern border yet, only indicating that they plan to visit the area at "some point" in the face of the migration situation. The US vice president was appointed the country's migration czar on 24 March.

The US vice president's visit to New Hampshire comes after Brandon Judd, president of the US National Border Patrol Council (NBPC), argued it's only natural that Harris has not travelled to the country's southern border since POTUS appointed her the Biden administration's migration czar.

"Because if she goes to the US border, people are going to expect her to fix the problem, so she avoids it", Judd told Fox News late last week, adding that "putting politics ahead of what's best for this country" is a "disgusting" fact.

Biden, for his part, referred to the situation on the nation's southern border as a "crisis" for the first time since he assumed office in January.

© REUTERS / ADREES LATIF
Border Crisis: Who Wants to Flood the US With Migrants and Why?
This followed US Homeland Security Secretary Alejandro Mayorkas warning that the country is on pace to apprehend more refugees at its southern border than in the last 20 years due a surge in migration.

According to data from US Customs and Border Protection (CBP), agency personnel encountered a record 172,000 migrants on the southwest border in March. Additionally, Border Patrol operatives detained more than 11,000 unaccompanied children between 28 February and 20 March, a massive increase from the 5,600 children the agency apprehended in January.

Republicans have repeatedly pointed the finger at President Biden, citing his reversal of many of Trump's migration policies, including freezing construction of a border wall and the scrapping of the "Remain in Mexico" requirement, stipulating that Central American asylum seekers must stay south of the US border while their claims are assessed by US courts.